This week’s new release. The desert is a harsh environment, with the combination of sun, sand and wind making life difficult for anyone trying to eke out an existence among the dunes. Some colonists have tried to protect themselves from the climate by digging themselves into the terrain and building their houses, workshops underground. In some cases they’ve built above ground and then buried the structures under a layer of plascrete and sand, leaving just the doors and windows exposed, with a few vents and exhausts. 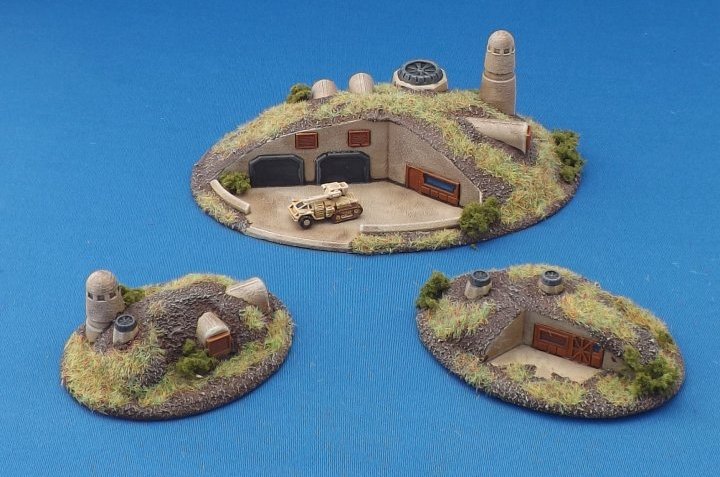 Today we’ve added three underground structures to the website – a couple of small houses and a larger complex with garage doors and a large exhaust fan. There’s also a pack available containing one large structure and three each of the smaller ones. They’re listed under a new category of buildings, Underground Structures.

They are all one-piece resin castings which will make a rather different addition to your 6mm desert Sci-fi layout. We’ll have stock of these at the Joy of Six in a couple of weeks.

We have further additions to the Underground Structures range planned – in fact they’re more then planned, we already have some of them in hand, as you can see below. These are effectively sunken pits where the underground dwelling is based around a central courtyard. We should also have these at Jo6.

6mm Brigade Models New Release Sci-Fi
This entry was posted on Friday, June 29th, 2018 at 12:18 and is filed under News. You can follow any responses to this entry through the RSS 2.0 feed. You can skip to the end and leave a response. Pinging is currently not allowed.