At the outbreak of war in 1939 Norway declared itself neutral. Both the German and Allied powers had a different plan in mind. For Germany, Norway represented an excellent point of attack against the British, with deep harbours and airfields within striking distance of the British mainland. The port at Narvik offered access to Swedish iron ore which Germany desperately needed to maintain it’s war effort. For the Allies, controlling Norway would bottle up the German fleet denying it access to the North Atlantic.
Germany invaded in April 1940, quickly occupying Oslo as well as other major Norwegian settlements. The Norwegian army was a small, conscript based force of around 90,000 men, where only the officer class were professionals. At the time of the German invasion there were 19,000 men under arms and the government introduced a partial mobilisation of the remainder of the force. Britain and France sent troops to help hold off the Germans and for the first time in the war, Germany lost a town it had taken when the Allies retook Narvik. As German troops also moved on France, the Allied troops withdrew and by June 10th, after 62 days of fighting, Norway capitulated.
Contains. 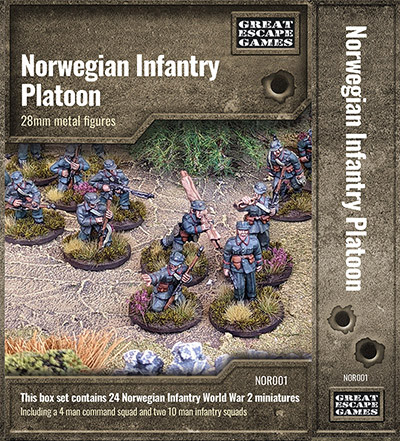 28mm News the sprue shop WWII
This entry was posted on Tuesday, January 24th, 2023 at 15:40 and is filed under News. You can follow any responses to this entry through the RSS 2.0 feed. You can skip to the end and leave a response. Pinging is currently not allowed.