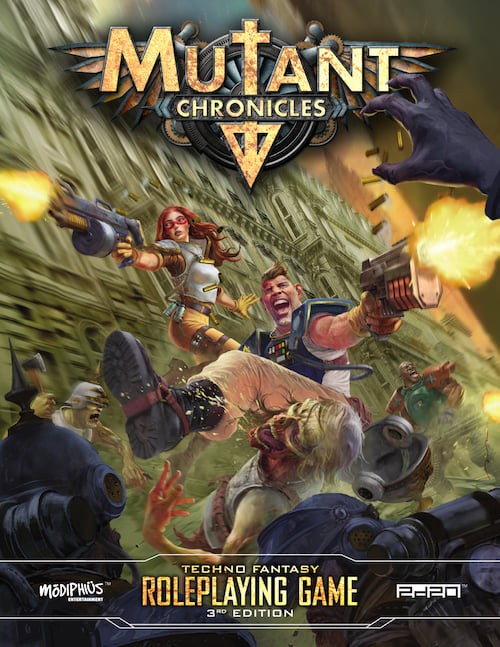 In 2013, Modiphius started work on a reboot of the classic dieselpunk roleplaying game Mutant Chronicles, and along with it, our in house 2d20 roleplaying system.
Getting to work with Mutant Chronicles was a wild experience, I’d bought and played the games in the 90’s so being able to bring this universe back, and expand on the story was so much fun, especially for our new young company.

The project triggered our development of 2d20, the game system that would go on to fuel other Modiphius roleplaying games like Conan, John Carter of Mars, Infinity, Dishonored, Fallout, Achtung! Cthulhu and Dune. Jay Little (the designer behind FFG’s Star Wars RPG and X-Wing) was brought on board to take our fledgling ideas and turn them into a professional all singing, all dancing RPG system that could face the rigours of the Dark Symmetry and serve it up for breakfast!
Through the 2014 Kickstarter, we ended up funding 18 books, a Savage Worlds edition of the rules, GM screen, multiple card decks and RPG miniatures. We roamed the solar system, explored the different timelines, revealed never before seen secrets of the Mutant Chronicles universe, and brought the story to a stunning final climactic battle with the Dark Apostles on Earth. After that, we created the RPG tie-in for the Siege of the Citadel board game to let players take part in one of the greatest battles mankind would ever face.

Now 9 years later our journey through the Mutant Chronicles has come to an end, we feel like what we created moved the story on so much and filled in lots of gaps the fans had been asking for… and we realised this was a great time to close the story. It’s time to return it to the hands of Cabinet Licensing who I’m sure will have plans for the future (for example there is a new edition of Warzone in the works!)

We’re now placing all the remaining Mutant Chronicles stock on sale at a 50% discount (bar a couple of recent releases) through our webstore so if you’ve been hanging on this is your last chance to pick up the Mutant Chronicles 3rd Edition roleplaying game and its many supplements and remaining accessories.
At the same time, we’ll be making the remaining stock of Siege of the Citadel boardgame available very soon - from the base game to the various expansions - these are not going to retail so it will be your last chance to get this too.

Both lines will cease sales at the end of June so grab them while you can!
Chris Birch, Modiphius

Modiphius Entertainment News Sci-Fi
This entry was posted on Monday, February 28th, 2022 at 08:36 and is filed under News. You can follow any responses to this entry through the RSS 2.0 feed. You can skip to the end and leave a response. Pinging is currently not allowed.