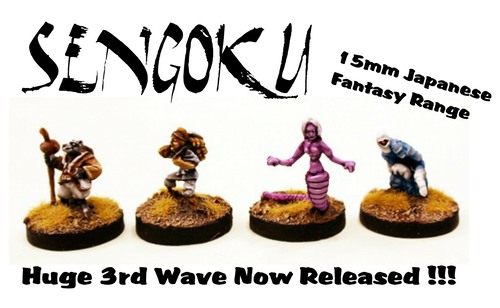 The Third Wave of Sengoku 15mm Japanese Fantasy miniatures by John Bell is now released! It is the largest such range in the world! Sixty plus single codes and packs as well as three complete sets and two HOTT 2nd Edition 24AP Armies supplied with all needed element bases. Great for Japan themed games or spicing up your 15mm fantasy or pulp or post-apocalyptic collections among many others. As well as Male and Female warriors there are Male and Female Buddhist monks. There are Goblins and Kappa was well as Tengu and Oni. Ghosts, Snakes and Monsters plus centipede, snake and spider bodied warriors and monsters. School Girls in Japanese uniforms and now Goblin Cavalry, Plant Sprits, Ghosts and Tanuki. Wow! Click through to see all the new and explore! Thanks. GBS

15mm 15mm.co.uk Fantasy New Release
This entry was posted on Wednesday, May 11th, 2016 at 12:38 and is filed under News. You can follow any responses to this entry through the RSS 2.0 feed. You can skip to the end and leave a response. Pinging is currently not allowed.