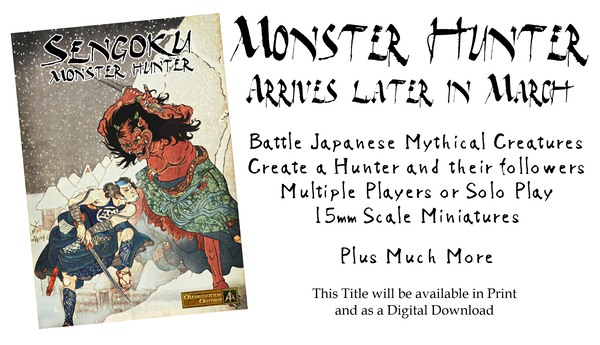 Later in March there will be a new game system from Alternative Armies. It is called Sengoku Monster Hunter and it will sit atop the range of 15mm scale Japanese Fantasy miniatures called Sengoku sculpted by John Bell. Written by Steve Danes (he of Furioso) it is multiple or solo play where you create a Hunter and then seek out the creatures of myth then this will be for you. Details in the article. We also have a new release SGFP32 Sengoku Monster Hunter Tokens which act as game currency, monster reveal tokens and bases for your miniatures.

15mm alternative armies Fantasy News
This entry was posted on Friday, March 2nd, 2018 at 16:00 and is filed under News. You can follow any responses to this entry through the RSS 2.0 feed. You can skip to the end and leave a response. Pinging is currently not allowed.

3 thoughts on “News From Alternative Armies”