Alternative Armies 28mm release. Every now and again you just smile at some miniatures and that is the case here. The armoured Goblins riding on Dodo's were sculpted by Elton Waters in the early 2000's and are now back in production. They are a modular set in that we have two poses of rider with open hands and the riders are supplied with sets of weapons to choose from meaning sword, lance, bow and more to choose from. They go well with the other OH Goblin warrior packs. 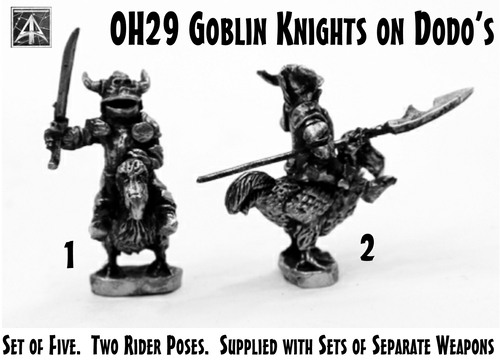 Alternative Armies is proud to now release more classic 28mm scale miniatures as part of our ongoing programme to bring our mighty range back to the world of wargaming. Following up on the two codes in the 'Kev's Creatures' range KC1 Lesser Goblins and KC2 Mountain Orcs we now have another code of mighty Mountain Orcs sculpted by Mike Owen in the late 1990's that go great with them and includes personalities such as the massive 40mm plus tall chieftain! Thanks. GBS

28mm alternative armies Fantasy New Release
This entry was posted on Wednesday, October 28th, 2015 at 16:37 and is filed under News. You can follow any responses to this entry through the RSS 2.0 feed. You can leave a response, or trackback from your own site.