The mercenary unit now known as Ben Mehdi’s Legion has had an interesting past. Naming your unit for its commander is always asking for trouble, as two name changes will testify. Initially known as Baffin’s Legion, the death of Colonel Baffin led to the unit being taken over by Lucas Broglie, a former officer in the Slammer’s Regiment, thereby becoming Broglie’s Legion. Broglie then met his end in the Meridienne War in 334TW, and the command baton passed to Colonel Hussein ben Mehdi, formerly part of Fasolini’s Company.

Ben Mehdi oversaw a major equipment upgrade, with the Legion’s older GD-800 series of hover vehicles replaced by Gull Combat Systems’ GS-1000 series. Their M12 tank destroyers were also upgraded from A1 to A4 standard, with thicker armour and a 20cm powergun instead of the older vehicle’s 15cm weapon.

Their smaller vehicles were also replaced, with the FN A21-series hover jeeps phased out in favour of Gull’s newer GS-700 model. A new vehicle also came into use – the GS-934 Recce Car. This uses a smaller version of the GS-1000 hull with its distinctive hex-patterned skirt, mounting a remote twin powergun turret over the engine deck. The roomy two-man cabin has plenty of space for detection equipment as befits its rôle as a forward scout vehicle. 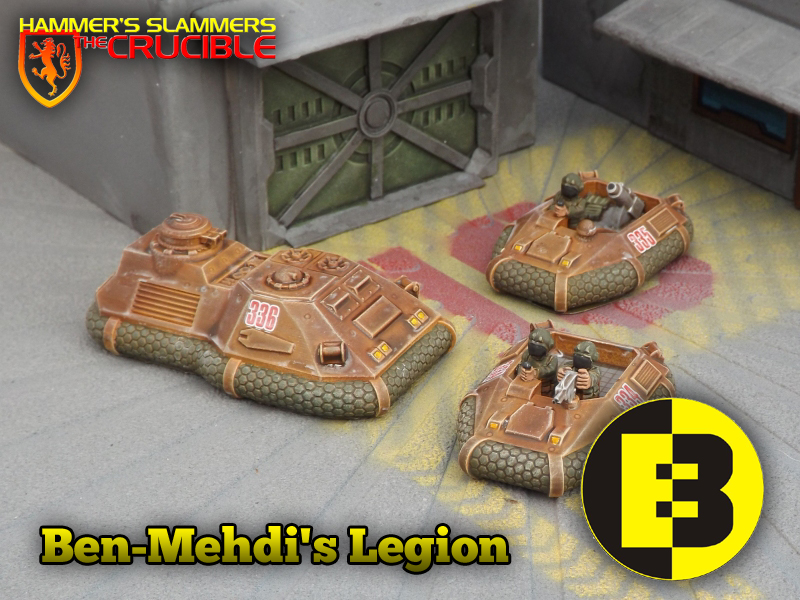 Both new vehicles have a resin hull; the GS-934 has a metal gun turret, while the jeeps come with two crew figures for the basic version, or one crew plus a mortar sprue for the mortar version.

And before anyone asks … yes, I had a bit of a varnish problem with these, hence the odd white spot 🙁

15mm Brigade Models News Sci-Fi
This entry was posted on Friday, February 14th, 2020 at 12:45 and is filed under News. You can follow any responses to this entry through the RSS 2.0 feed. You can skip to the end and leave a response. Pinging is currently not allowed.