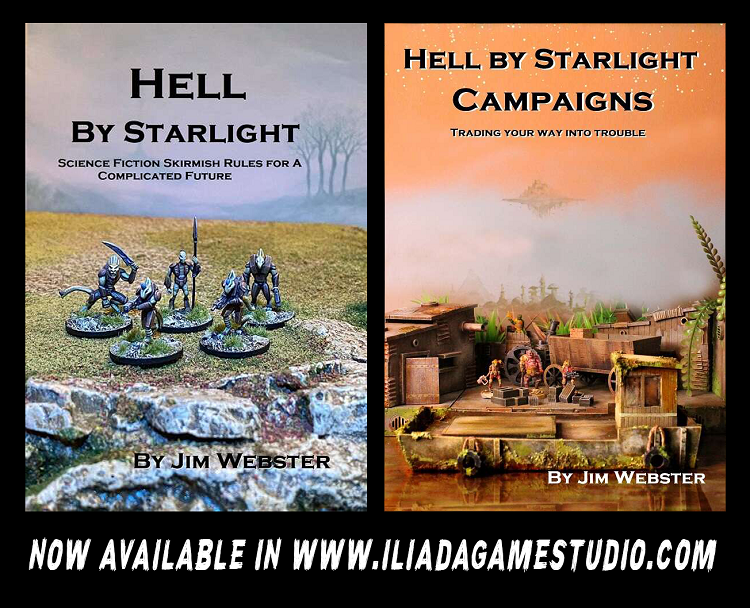 Jim Webster's sci-fi skirmish rules Hell by Starlight and Campaign book is available in my website.

The guide is written to help both the player with enthusiastic opponents but also to support the solo player as well.
My hope is that it will help you build science fiction campaigns that let you use comparatively small forces, but in a realistic manner.
In this universe you're not a major player, in fact you're probably not even a major nuisance. You're just a jobbing merchant, trading your way around the sector, living on your wits and turning an honest credit whenever the opportunity presents itself.
Although written with Hell by Starlight rules in mind, you should be able to use other rule systems.

I confess that I've always felt that done properly, a campaign can provide far more interesting and unexpected games than just fighting 'one off
battles.' Over the years I've had a lot of fun fighting skirmishes that nobody in their right mind would create from scratch. So with this guide
I've tried to help you create a coherent background that hangs together for you. I hope I've managed to balance book keeping with fun, because frankly
if you're not enjoying it, something has gone wrong, no matter how 'realistic' things are.

Iliada Game Studio News Sci-Fi
This entry was posted on Monday, April 4th, 2022 at 10:58 and is filed under News. You can follow any responses to this entry through the RSS 2.0 feed. You can skip to the end and leave a response. Pinging is currently not allowed.