One Of Our Submarines

Just in case your 1/1000th scale harbour needs somewhere to park a submarine, we have two different options available for you this weekend. 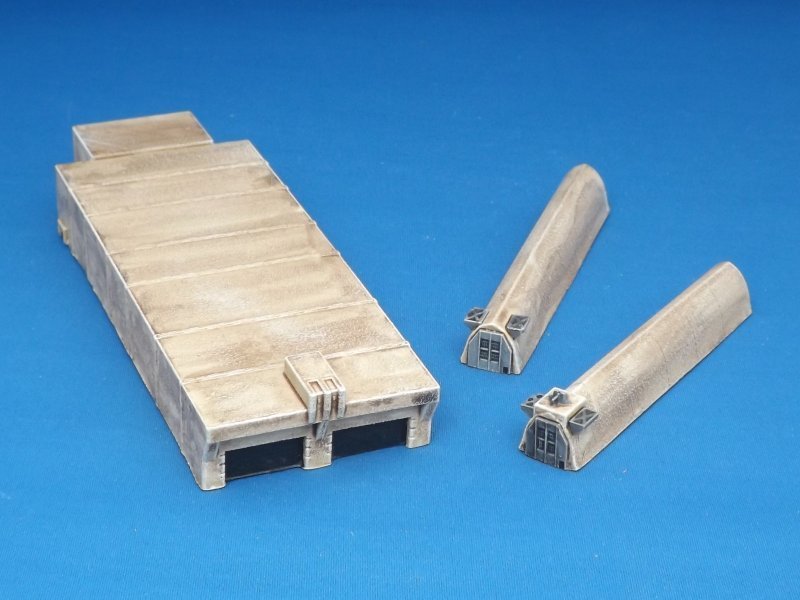 The first, larger option is a blocky construction known as the Scorff Bunker, so called because it was built on the banks of the Scorff river running into the Lorient naval base in 1940. The 130m long concrete edifice has two side-by-side pens and is large enough to house four U-boats at once.

Smaller options are the two oddly-shaped ‘Dom’ repair bunkers – Dom means cathedral in German and they were named because of their supposed resemblance to a religious building. The 80m long bunkers, also part of the Lorient installation, could hold a single smaller U-boat for repair, which was winched out of the water and across a turntable to either one of these pens or the much larger Keroman I, II or III bunkers. One has a concrete emplacement for an AA gun over the main door – although the two bunkers are otherwise identical, there is no obvious evidence that the other bunker ever had such an emplacement, there is nothing there now and there are no obvious scars of its removal so only one is modelled with an AA gun. I couldn’t find any conclusive proof of what type of gun it was either – the only artists impression I’ve seen shows the gun to be an 88mm FlaK-18, so that’s what I’ve gone with.

On another minor point, we’ve renamed another of our Small Scale Scenery models – the former Cuban Church is now called the Spanish-American Church. This is because we have noticed that orders containing this item are often held for a day or two by PayPal before the funds are released, we think it’s a security check just to ensure we aren’t involved in any dodgy dealings with one of the countries on the USA’s watch list ! I have in the past had to write emails to PayPal about this and one or two other items (eg CDSU spaceships with Vietnamese names) so we thought we’d take the safe option and just rename it to avoid any more orders getting delayed.

2mm Brigade Models historical New Release
This entry was posted on Friday, May 31st, 2019 at 13:03 and is filed under News. You can follow any responses to this entry through the RSS 2.0 feed. You can skip to the end and leave a response. Pinging is currently not allowed.

2 thoughts on “One Of Our Submarines”