Back in April, when we released the Demeter Attack VTOL at Salute, it should have been accompanied by a second model, a utility VTOL (think UH-1 Huey in terms of its rôle). However, we had several issues with the other prototype, it would never cast reliably enough to be able to release so we’ve ended up having to redesign and reprint parts of it. We think we’re there now, we’ve run enough test casts to be happy that all the bits now work.

The HU.1 Perseus is, as previously mentioned, a utility type that has a rear cabin for four fully equipped infantry (six over short distances as long as they don’t mind being squeezed in). It has the same chin turret as the Demeter with a 2cm tri-barrel powergun and can also carry a variety of underwing stores so can serve as a passable gunship. 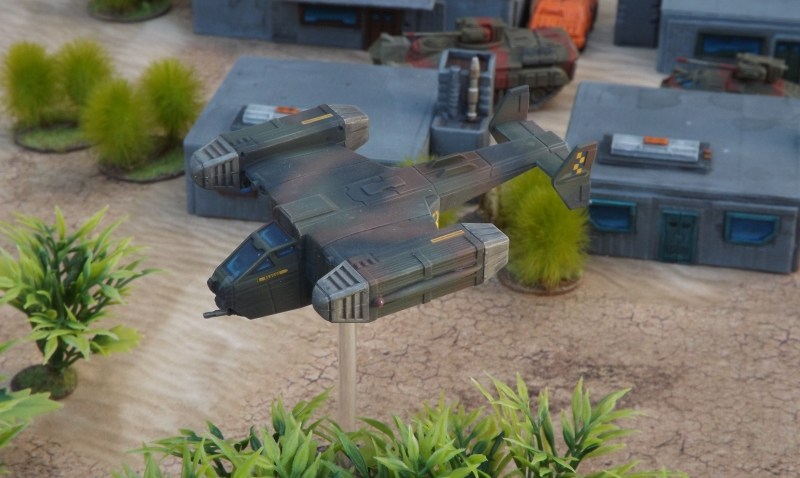 The Perseus is used by three Hammer’s Slammers units as a fast APC flying nap-of-the-earth when in the combat zone, staying down among the weeds to avoid being shot out of the sky. Both the Eaglewing and the Texian 101st base their forces around VTOL transports and gunships, while Guardforce O’Higgins’ veteran Fianóglach company are equipped with a number of Perseus and act as a rapid-reaction unit. In the detachment lists for these three forces, the Perseus replaces the Black Crow VTOL.

The model is a four-part resin kit (body, tail and two wings) with five metal parts (turret, two tail fins, two cabin doors). The separate cabin doors allow for a door gunner (which we don’t yet make but will do).

15mm Brigade Models New Release Sci-Fi
This entry was posted on Saturday, September 21st, 2019 at 09:39 and is filed under News. You can follow any responses to this entry through the RSS 2.0 feed. You can skip to the end and leave a response. Pinging is currently not allowed.