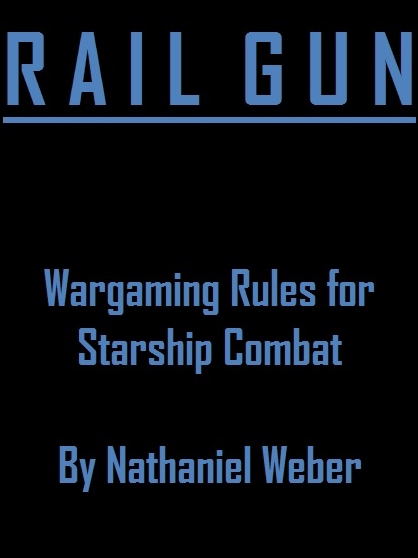 This is the playtest version of RAIL GUN, a set of wargaming rules for creating sci-fi spaceship battles on the table top. It is intended as a game somewhere between hard-core simulation and quick-play beer and pretzel games. It borrows aspects from both of those kinds of space ship games, and injects some ideas from air combat and naval gaming.

This is the PLAYTEST VERSION of the rules. Anyone who buys will end up with the final version of the rules for free, and can provide any feedback/commentary they want (or sit back and enjoy the updates).

The game is intended as medium complexity--in between hard-core, 3-d tactical simulations and beer-and-pretzel fleet action games. Here are some details:

2) The game uses D10s and measurements in inches, and is scale neutral--you can use any sized ships. It requires a 3'x3' or bigger space.

3) Light bookkeeping is required. Each ship's data fits on a 3x5 index card.

4) Movement is done by “vector.” There’s nothing to slow you down in space and there is no in-game speed limit. Speed carries over from turn to turn.

5) Knowing that the enemy is out there is one thing; hitting them with fire is another. Detecting targets—and trying to make yourself less detectable—are built into the firing rules.

6) Once a ship starts getting damaged, it will likely lose key systems in a hurry.

7) Weapons are simplified to a Firepower value, a range, and a “class” designation.

9) Ammo is tracked, but abstractly.

News Sci-Fi the dog's brush
This entry was posted on Thursday, April 16th, 2015 at 18:21 and is filed under News. You can follow any responses to this entry through the RSS 2.0 feed. You can leave a response, or trackback from your own site.