A BLUE WIND team consists of 12 critters, formed as an infantry squad, and always commanded by an officer, and often broken down into two fire teams. The second team is led by a sergeant, and often operates independently. Both teams have a two critter LMG crew, and the remaining three members of the squad are armed with a sniper rifle, rifle/grenade launcher combination, and normal rifle - this trooper is usually a medic in the second team and a communications specialist in the first team.
Unusually for the Republicans, these teams often wear camouflaged clothing appropriate to the area that they are operating in as they attempt to blend in with their surroundings during long reconnaissance patrols or sneak attacks.

HomeGuard Airmobile Squad RRP £30
8 x multipart metal 28mm miniatures, plastic slotta bases & unit data card
After Beii, many HomeGuard commanders saw the value of airmobile troops in defending their own worlds, but lacking the funds to operate massive Aerodyne fleets, adopted other methods. These mainly included the relatively cheap Enchawah EC 37 LARC series of rotorcraft. Airmobile troops are equipped with the LAKW 1-30 Carbine.
The LAKW 1-30 was a new assault weapon designed to replace the PMKW 2-18. Firing the new L30 round in a cut down 1-56 mechanism, the 1-30 was capable of single shot, three round burst or fully automatic fire, and was designed for flexibility in use. It featured a retractable stock, 30 round magazine and a very modern computer assisted reflex sight, which also enhanced aiming of the optional underslung 40mm grenade launcher. 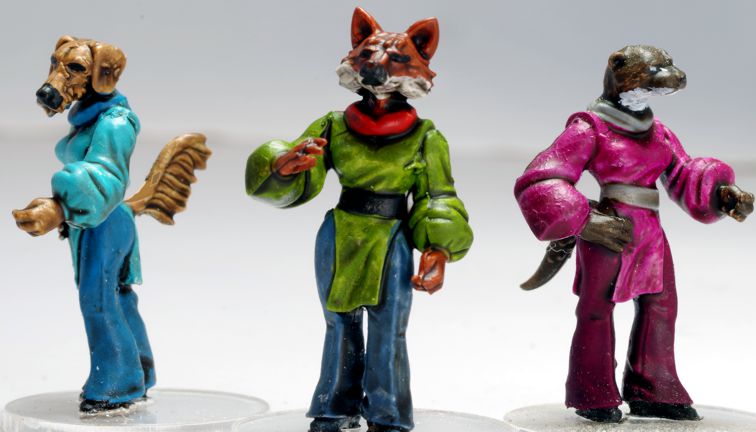 March New Releases
• Female Civilian Pack – 3 Figures £12
• EDF Airmobile Infantry, Carbine – 3 Figures £12
• Confed Airmobile Infantry, Carbine – 3 Figures £12
• EDF Heavy Infantry Reinforcements, Dachshund – 3 Figures £12
• Head Pack: Dachshund, EDF Helmet – 5 heads £4
• Head Pack: Dachshund, bareheaded – 5 heads £4
Sally 4th will be at Stand TF07 at Salute. We look forward to seeing you there.
The miniature range has been digitally sculpted and the figures are supplied as multi-piece metal castings to allow a wide variety of troop type to be depicted. The miniatures have been designed to overcome many of the problems associated with multi-piece metal castings. Heads are cast with a neck that finishes in a pin that locates in a hole in the body; where possible pairs of arms are cast as a pair holding a weapon with pins at tops of arms that locate in to holes in shoulders. This ensures that components align perfectly and are easy to glue together. Figures supplied with 25mm plastic slotta-base.

28mm News sally 4th Sci-Fi
This entry was posted on Saturday, March 30th, 2019 at 09:11 and is filed under News. You can follow any responses to this entry through the RSS 2.0 feed. You can skip to the end and leave a response. Pinging is currently not allowed.