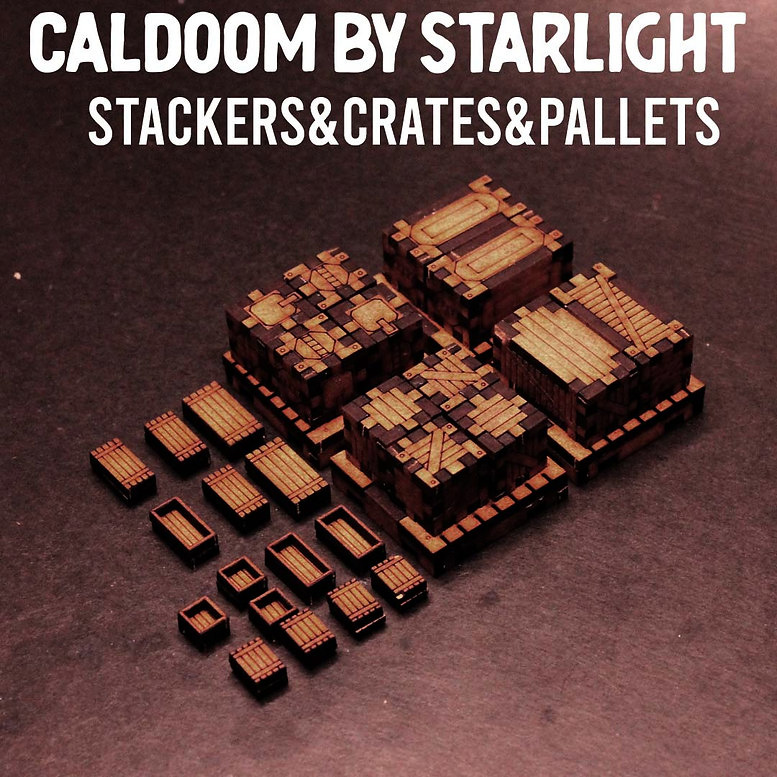 A set of Stackers, crates and pallets for 28mm tabletop games.
There are options to buy separately.

The staple of interplanetary trade is the half ton stacker. A rugged crate, basically a cube; it is capable of being picked up using G Clamps, hooked into an air conveyor tube, or on more backward worlds, dragged across the hold using ropes and ramps and loaded onto a cart pulled by the local draught animal. They can even be stacked on pallets and moved by forks. The crates, largely identical from the outside, can be divided internally to take wine bottles, sealed to transport certain classes of liquids, or the crate itself can be shared by several consignors. Some major shipping lines will have ships which are designed to take a number of containers, each of which take two hundred stackers.
Over time it was realised that there are limits to what can be packed into the standard half ton stacker. A one ton stacker then entered circulation. Think of it as a rectangle the size of two half ton stackers. Thus some items, such as furniture and similar, can now be transported already assembled. Previously they came in their own, non-standard, crates and had to be loaded separately, and probably last. Such cargoes demand a premium price.
The ubiquity of the stacker has defined vehicle design. Anything that carries freight, every hatch, every flatbed, will be designed so that it can cope with stackers be they ton or half ton.
But still, when loads are offered or prices quoted, it is always for the standard half ton stacker no matter if it comes in a mixture of tons and half tons.
Obviously once stackers ‘enter circulation’ they travel backwards and forward, being emptied, refilled, and sent on their way again. Peeling off the packing labels to trace just where the stacker has travelled can be a fascinating process. But sometimes you have to buy new, and on Caldoom, if you need to buy stackers, the obvious source is Buggest Stackers who make them in both metal and timber.
Buggest make most of the new stackers that appear on the planet. They make them to the standard design, little more than five sturdy panels and a lid. But then what else do you want from a stacker?

28mm Iliada Game Studio New Release Sci-Fi
This entry was posted on Friday, April 15th, 2022 at 09:02 and is filed under News. You can follow any responses to this entry through the RSS 2.0 feed. You can skip to the end and leave a response. Pinging is currently not allowed.