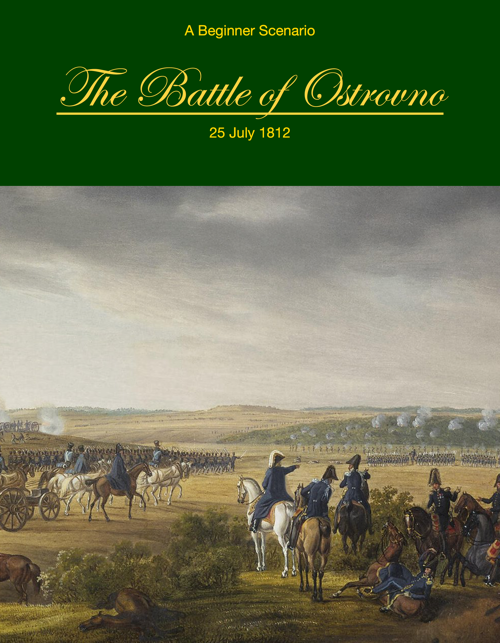 On 25 July 1812, Murat contacted Osterman-Tolstoy in the vicinity of Ostrovno. Tolstoy setup a rear guard position in a heavy wood outside the village. Without waiting for the infantry of Eugene's IV Corps d'armée to come up, Murat ordered a series of useless charges against the Russian line. Eventually, Eugene's lead division arrived on the field, outflanking the Russians, and necessitating their withdrawal east toward Vitebsk. 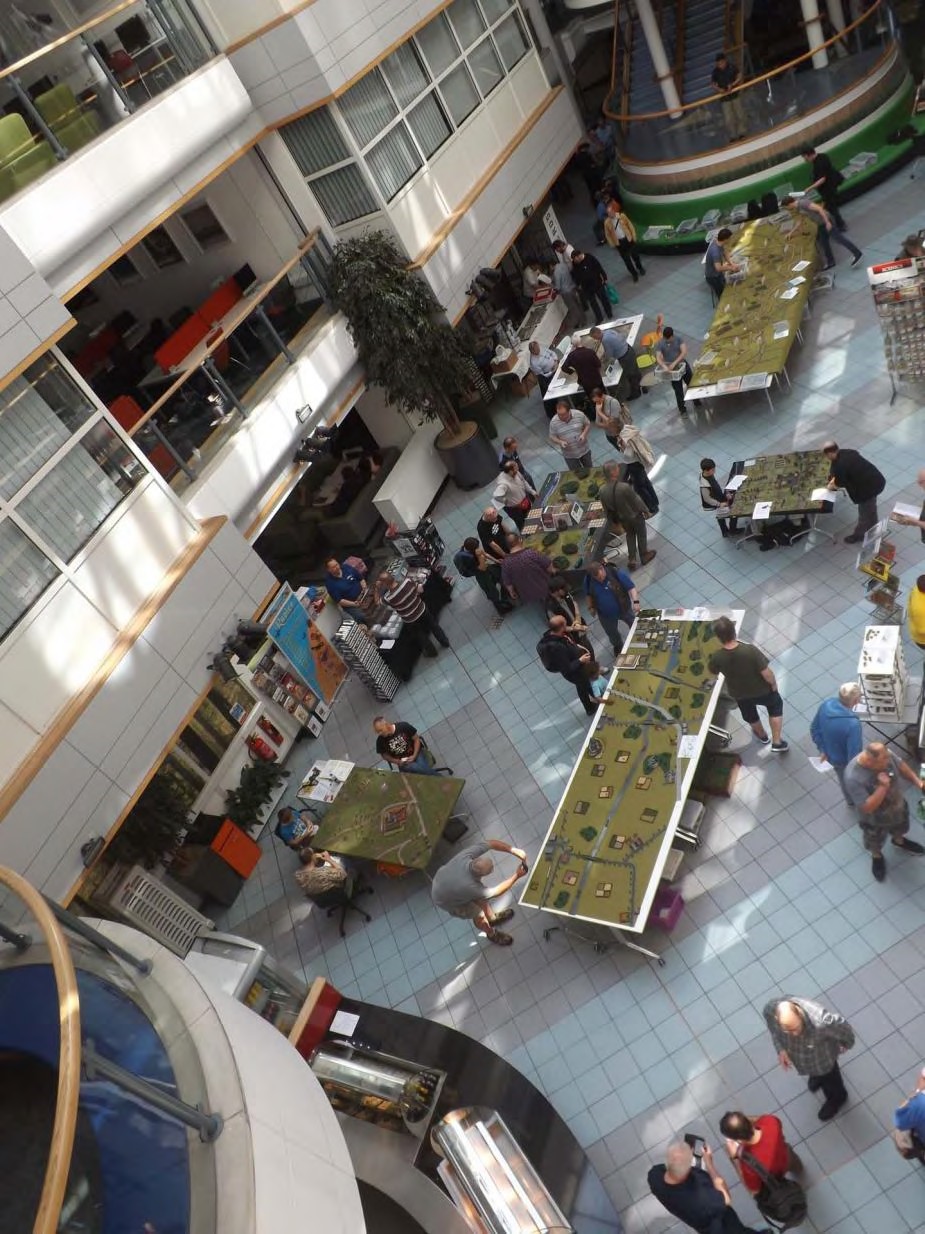 Welcome to Joy of Six 2016 part 2.
I hope that the first part whetted your appetite nicely as we delve into the second set of wonderful and diverse 6mm games that were on display.

We kick off with G13 Dresden from the MADgamers.  This club has staged a game at every JOS,  (and its predecessor, the Baccus Gaming Day),  and they always stage something big and enjoyable.   Their approach to talking to the public is exemplary as they engage and explain, often to the detriment of actually getting the game played.  This year they staged 96 square feet of wonderful Napoleonic action as they presented the battle of Dresden as only the MADgamers know how. 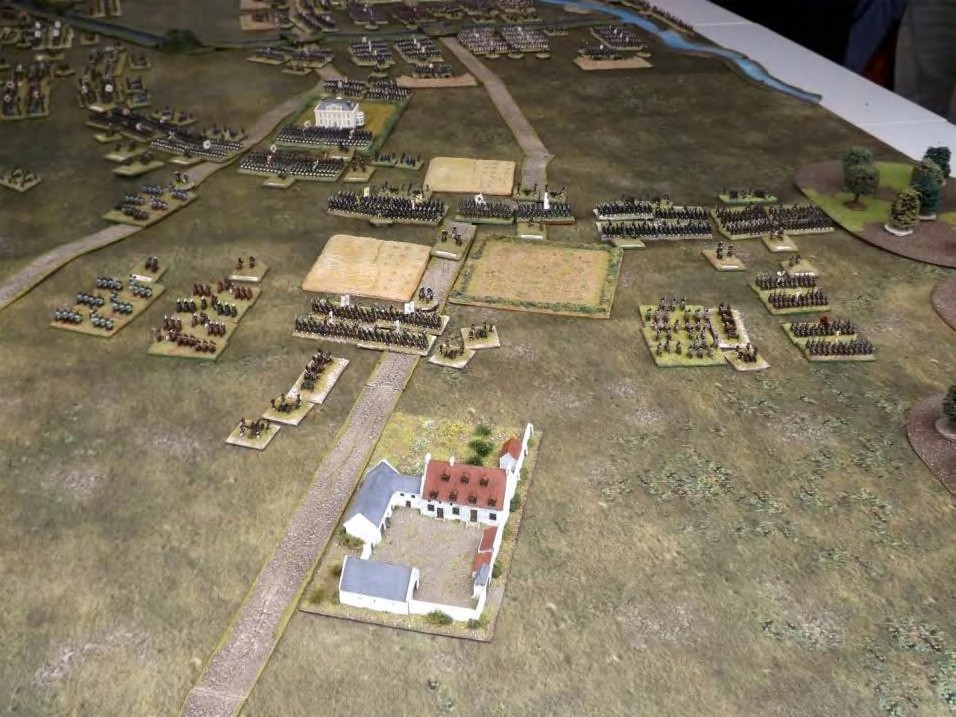 Ancients period.  Although one of the smaller games on show, this lacked nothing in terms of presentation and scenery, with a beautiful (card) Roman fortified camp playing centre stage.
The game also boasted several of GSM’s cunning ‘lift off’ wooded area, which allowed you to take off the entire canopy in order to easily move units inside the forests. 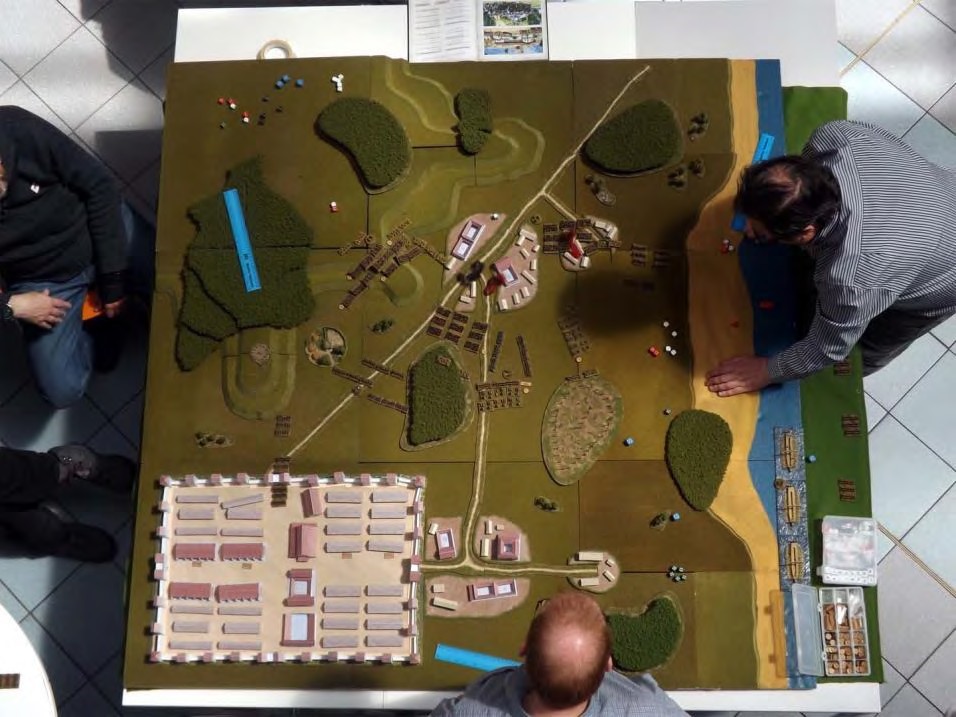 Finally, in the main hall, G15 Ligny from Leicester Wargamers was a very neatly presented representation of that famous prequel to Waterloo.  As with all of the games on show, the guys worked hard to showing just how well 6mm figures and terrain can be used to give you a feel for a large battle that is all too easily lost when the same is attempted with larger scale figures.   The picture shows just how well the managed to do this. Which brings us nicely into the games in the side rooms.    G16 Skalitz from RAF Cranwell wargamers .  The battle of Skalitz, as all readers will instantly recall, was a  minor engagement in the Königgratz campaign of the Austro-Prussian War of 1866.  The club has to be congratulated at bringing such a non-mainstream subject to the show, and the staging proved to be right up there in terms of the quality of figures and terrain, and very importantly keeping the right balance between the two. 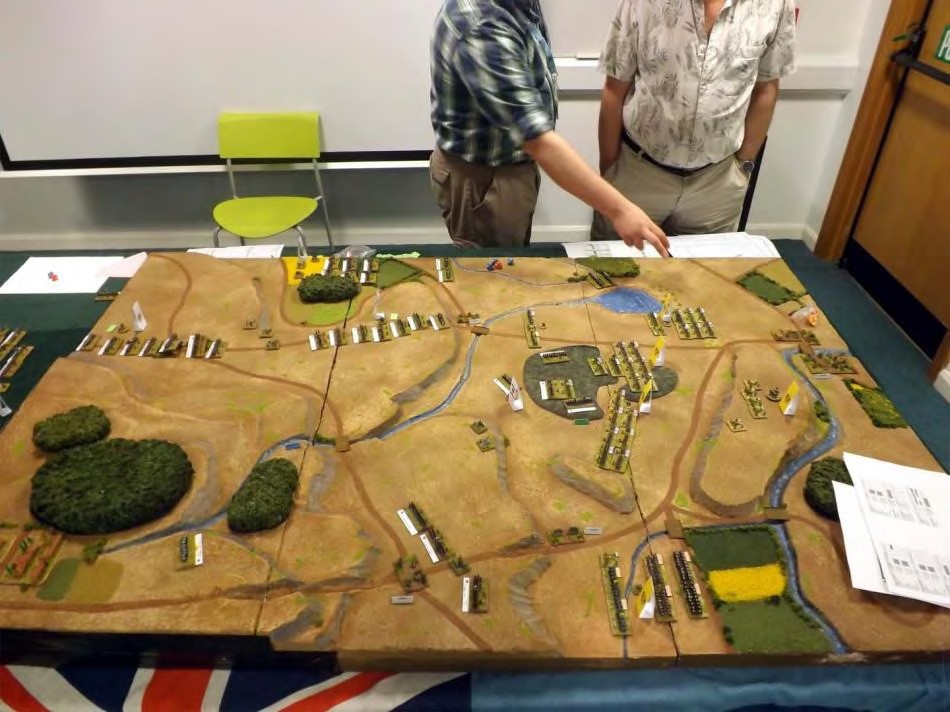 Staying with points East, G17, Battle for Ponyri from the Luton Lancers, replaced cavalry with tanks and rifled muskets with assault rifles as we moved into a lively action from the Kursk campaign which saw both sides pour huge resources into taking or holding a relatively useless piece of Russian real estate.   Once again a very nicely presented game with a great excuse for getting lots of armour on to the table. Game G18 Break the Line from David Elks and Tim Rogers was a great hit on the day and worked from a simple premise.   Using the inherent possibilities of 6mm figures to their full, the players were presented with two 1:1 scale British and French battalions each and asked the latter to try and break though the former’s defensive line position. The classic Napoleonic conundrum, but presented in a very clear and intuitive manner which presented both sides with numerous problems.   Believe me, moving 600+ figures  correctly is a lot trickier than getting one 12 man unit into contact with another 12 man unit! 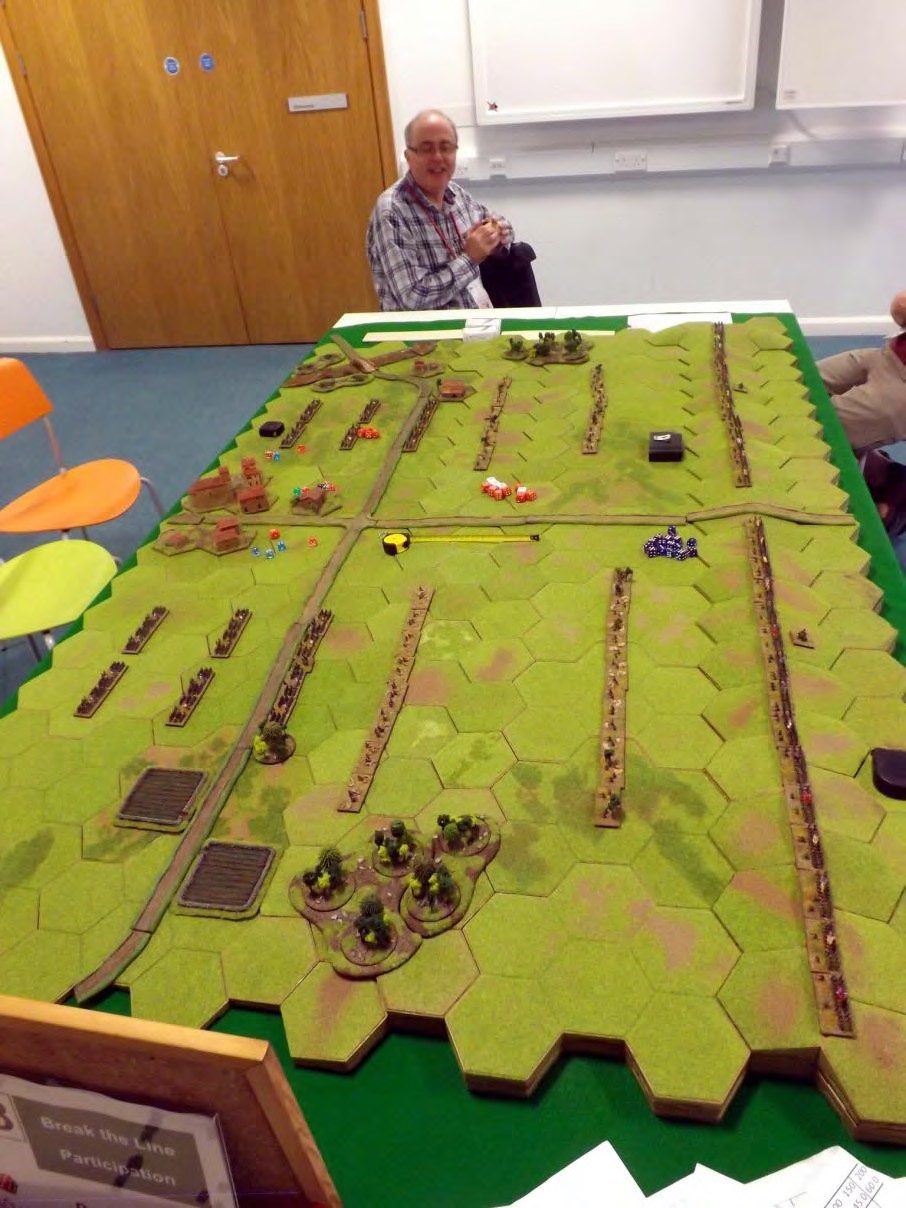 G19 Battle of Wilton came from the ever present Legion of Blokes.   Pete Wilkes continually produces master classes in the art of creating outstanding wargames terrain and balancing it with just the right number of troops on the table to complement it.   This year’s game was no exception to that as I am sure you can agree. 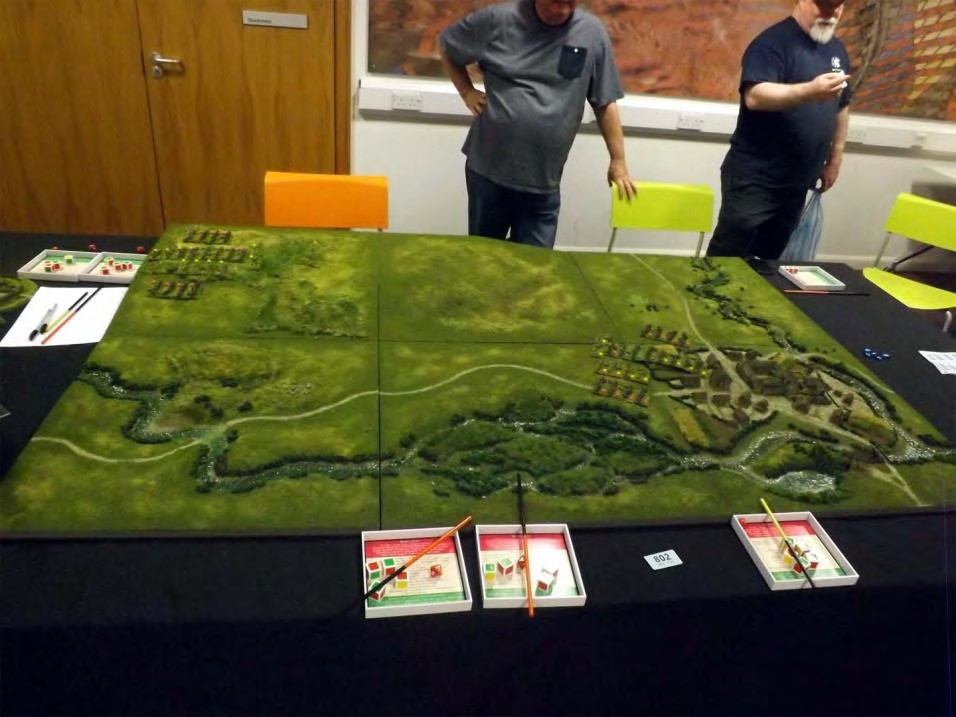 SeaBee games put on the smallest show on the day in the form of Operation Bagration, but that was no hinderance at all to effectiveness of display and showing just how flexible 6mm gaming can be from the huge monster tables to the compact practical ones. And with the final games, we come to two absolute gems.  Dan Hodgson has been presenting some outstanding games at the JOS over the years, but this time he really did outdo himself.   He committed to not one, but two games, both on a Star Wars theme.  On the hands of a lesser mortal this might just all have ended in tears.  Instead, we got a ‘tour de Force’…

Visitors to Dan’s side room Far, far away were first met by G21,  a recreation of the Assault on Hoth from ‘The Empire Strikes Back’.   A very effective icy waste hosted the brave Rebels defending their outpost against the overwhelming forces of the Empire.   The At-Ats were brought down to the planet by their own drop vehicles and began the steady advance. By itself this would have been award winning stuff, but a few feet away, the ‘Return of the Jedi’ was channelled for G22  based on the moon of Endor with skimmers, Empire forces, Ewoks, Stormtroopers and even a Death Star! Quite rightly Dan’s games were one of the main talking points of this year’s JOS.

While not a game G23 Dr Mike’s painting clinic run by the ever cheery Mike Salwey has become something of a fixture at the JOS, with his superbly equipped ‘clinic’ being open to all comers to hone their painting skills.   Always in demand, Mike spent all day helping those who wanted to get the best out of their 6mm painting. So how did it all go?   Well, to my mind, a wargames show needs to address three main constituencies:

Visitors:   You really do need them as they are there to view the games, join in where they can and provide a raison d’etre for the traders.
How did we do?   Well, with good food at cheap prices, lots to see and importantly lots to do, two thirds of the games were participation based, there was a hands-on painting clinic and a programme of seminars.   The mix of traders seemed to satisfy everyone and very importantly, we didn’t suffer the problem of the show dying on its feet at 2.00 which seems to the fate of all too many similar events nowadays.
In fact, although the show officially finished at 4.00pm we were still kicking people out half an hour later.

Visitor numbers were up by 20% on the previous year and we attracted wargamers from all parts of the UK, Ireland, Italy, the USA, Australia and New Zealand.   Not bad for a

‘minority interest’ event.   The buzz and excitement created by the happy throng was quite unlike any show I’ve ever been to, and a completely unscientific sampling indicates that pretty much everyone who came this year will definitely be along in 2017.

We did try and get some non-6mm gamers along with our offer of free entry to ‘6mm sceptics’.  The take up for this was quite small, which is the only disappointment on the day.   Leaving the scale bias out of the equation this was an outstanding show on the doorstep of some very large wargaming communities.   We will be repeating the offer again in 2017 and I just hope that gamers can drop some baggage and come along to join the fun.

However, all in all, I think we can put a big tick next to satisfying the attendees.

Exhibitors:   A really important group here.  Without the guys who put the games on, there is no show. Without the guys who put the games on pulling out the extra to give those games that ‘Wow’ factor, we don’t get an outstanding show.    They need a wee bit of encouragement and support from the organisers (which I hope they feel they did receive) and feedback and enthusiasm from the public.  All the games I saw during the day were getting a lot of attention and interest which makes the job of staging the game much easier.   The one thing that I did hear time and time again was that it was nice to have an audience who could ask questions other than, ‘How do you paint those things without going blind?’   Believe me, it you do anything with 6mm in a wargames show you cringe every time at those words.

Judging by the tired but happy expressions on the chaps packing away and the promises of bigger and better games for 2017 I think we did well for the exhibitors.

As for the games themselves, the standard of presentation was amazingly high.   To even have thought in terms of ’Best’ game would have been impossible.   The other point to note was the sheer diversity of the games on show.   Mention ‘6mm’ and I am sure that most people would, by now, have expected the large scale Napoleonic set piece  such as Dresden or Leipzig, but what about the huge Somme presentation, or the fabulous Star Wars

games?   How about Per Broden’s subversion of Saga and turning it into a wonderful 6mm game?  How about the fact that two thirds of the games were there to be played and not just viewed?   All points to consider the next time you read a eulogy about a ‘game’ which did nothing more than line up a few hundred large scale figures shoulder to shouder on each side  and present this still life as the pinnacle of how to stage a public game.

Traders:  The final supporting leg of the show.   These chaps trust the organisers to provide enough footfall of potential customers to make the event  worthwhile for them.   They need a decent pitch to exhibit their wares and they don’t want to be taken for granted.   All I can say is that when packing away, there was less stock to pack and much heavier money boxes then when they had unloaded in the morning and the faces were weary but smiling.

To wrap up – an extraordinary day.  Busy, energetic, lots of happy faces and it would seem that all involved can’t wait to do it again.  Now wouldn’t you want to be involved in a show like that?

The Joy of Six will return on Sunday 16th July 2017. Get those diaries marked.

You may also want to get some different perspectives on the show by checking out the following:

A quite spiffing You tube video report Joy of Six 2016

Murawski will be celebrating his 52nd birthday in August and we'd like for you to help him celebrate this momentous occasion with our 5 & 2 summer sale.

Buy any 5 packs at full price and get 2 more totally free (the cheapest 2 will be free)!

This will apply to all our packs including the incredibly popular battalion packs.

Shipping will be free on all orders over £100. GBP

We are offering 20% discount on a number of ranges including 28mm Normandy Buildings and 10mm Modern / Sci-Fi Range and a number of boxed miniatures games including Terminator and Dungeon Saga. All online orders from now until the 4th August 2016 will automatically be discounted by 20% at the checkout stage. 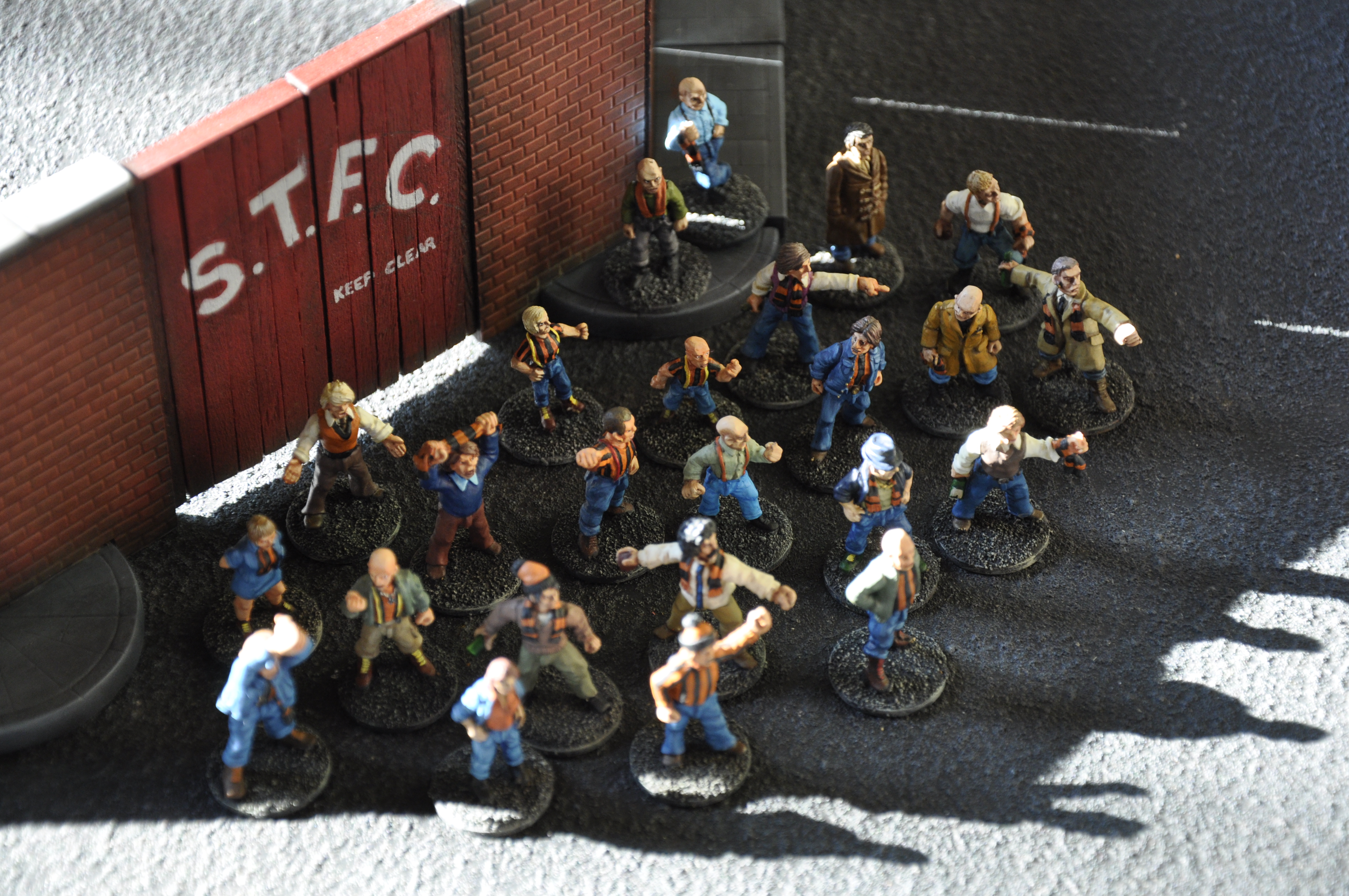 EVERYTHING IN THE AINSTY

CATALOGUE IS INCLUDED IN THE SALE

Come and see the Ainsty Roadshow at these venues. email Pre-Orders to [email protected] and collect on the day.

Come and see the Ainsty Stand, look for our Bright Green Cabinets!
We have 42 Feet of Product Racks at all shows.
email Pre-Orders* to [email protected] and collect on the day.

* Please note, we do not carry all our catalogue ranges to shows so pre-ordering is advisable as we may not have what you want with us on the day, also popular items will not last out the day despite us carrying extra stock of these.