The first of the new releases are now available to pre-order in the shop. 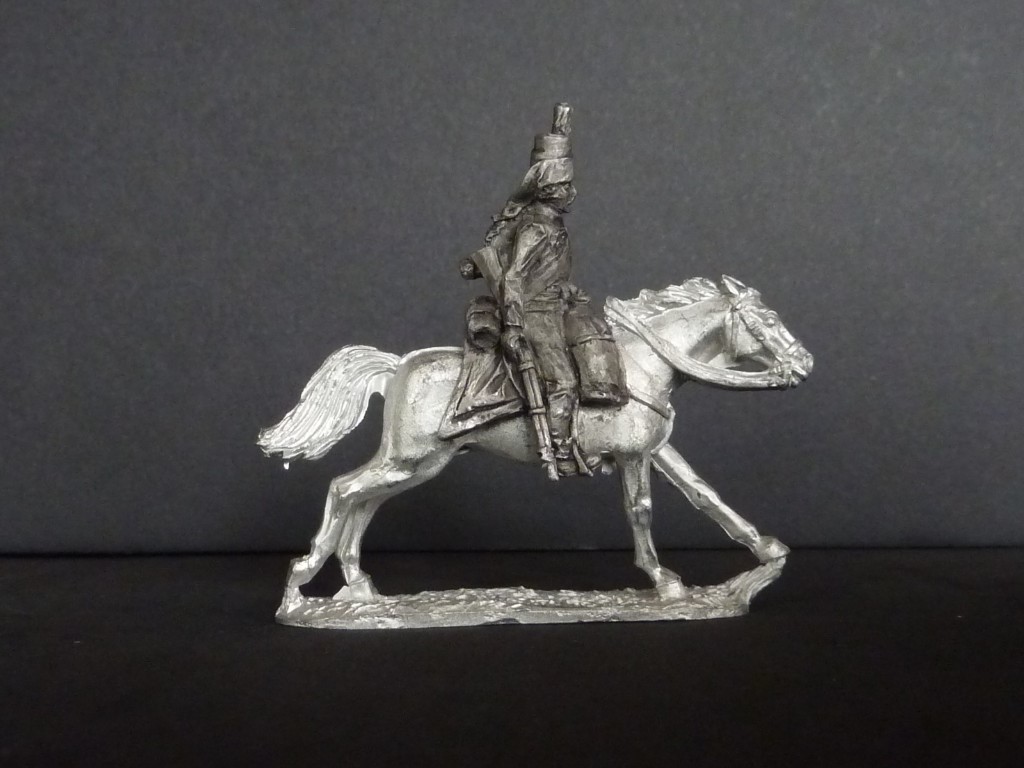 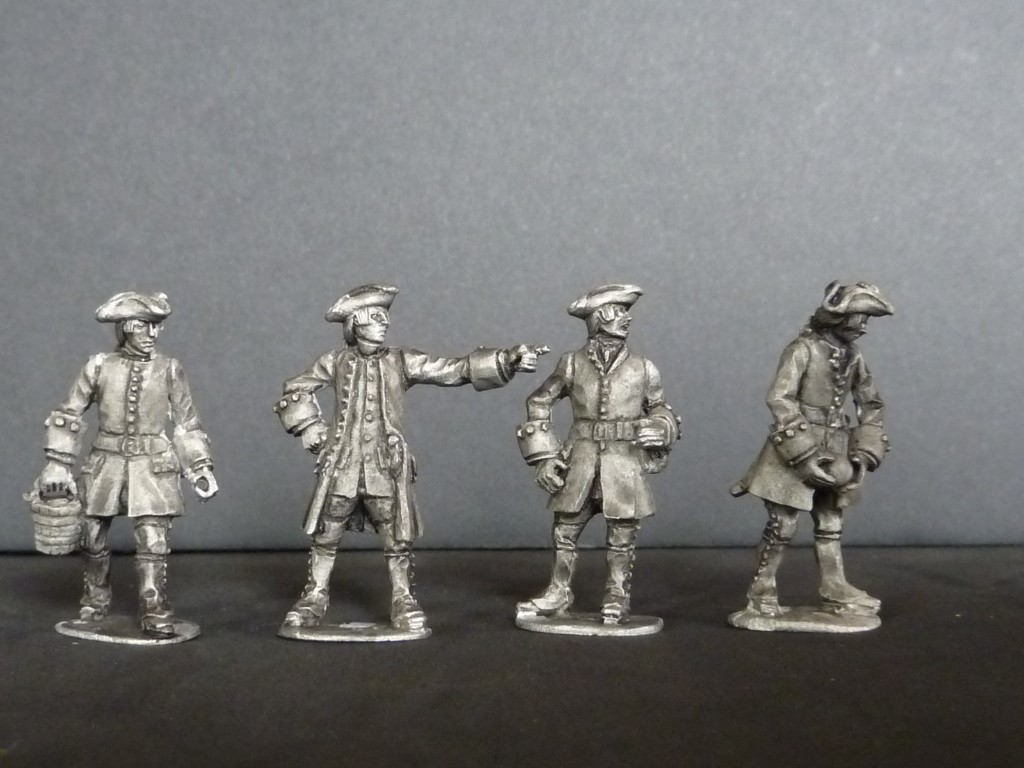 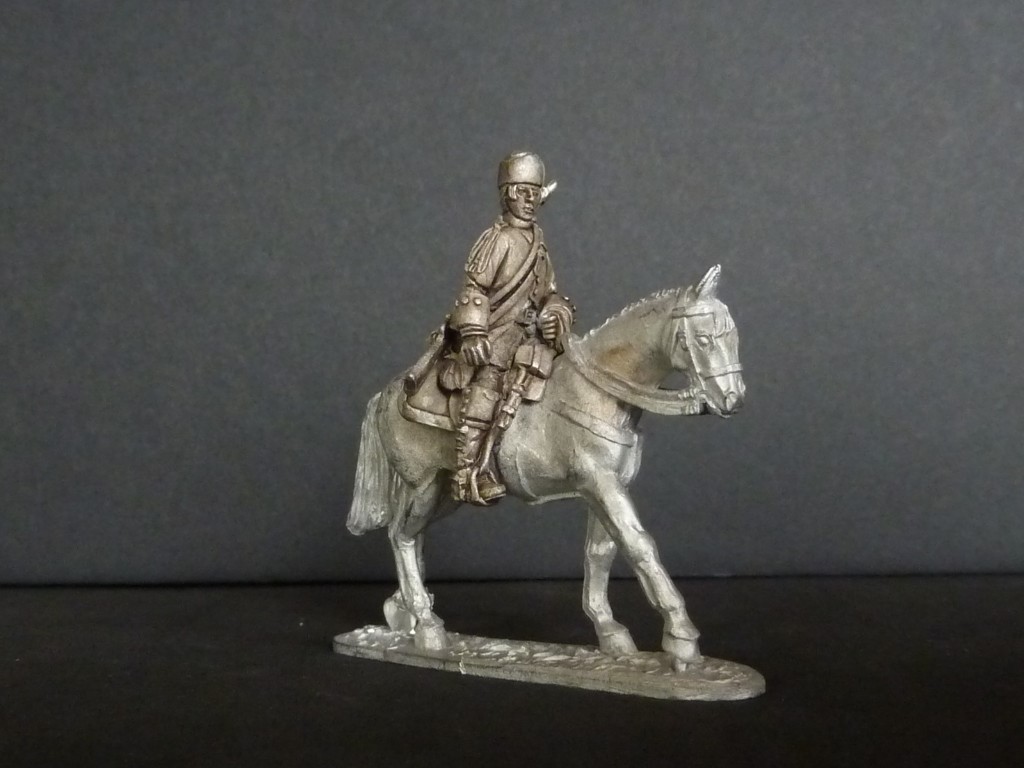 After getting some feedback from the gaming public it seems that Crom's Anvil was confusing for many.
It was not clear enough what there was to buy and in some cases how to buy it.

So, I have re-forged the site and hopefully it is a bit more conventional and thus easier to use!! 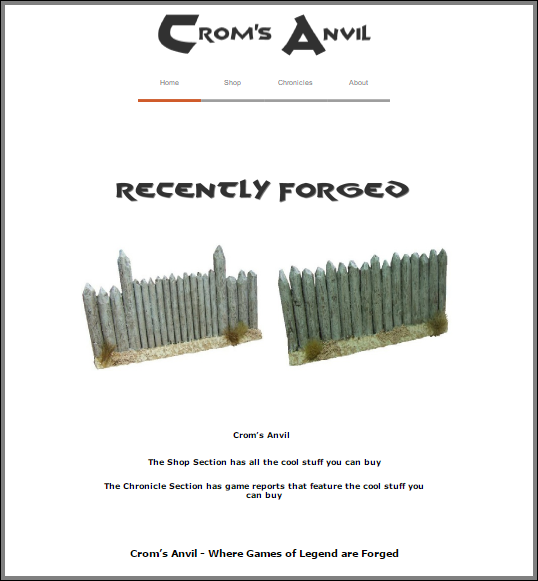 Terra-Formers are designed to make it easy to produce high quality, versatile wargames terrain that fits together perfectly and stays together while in use.

The system is based around precision laser cut frames that are made from a base and four sides that have different profiles (flat, hill slope, road, river, stream, canal etc). These profiles mean that each tile that you make will line up perfectly with the tile next to it that has the same profile. The side pieces each have two holes to fix the rare earth magnets in that are supplied with each kit. The rare earth magnets hold the tiles together when the terrain is being used. 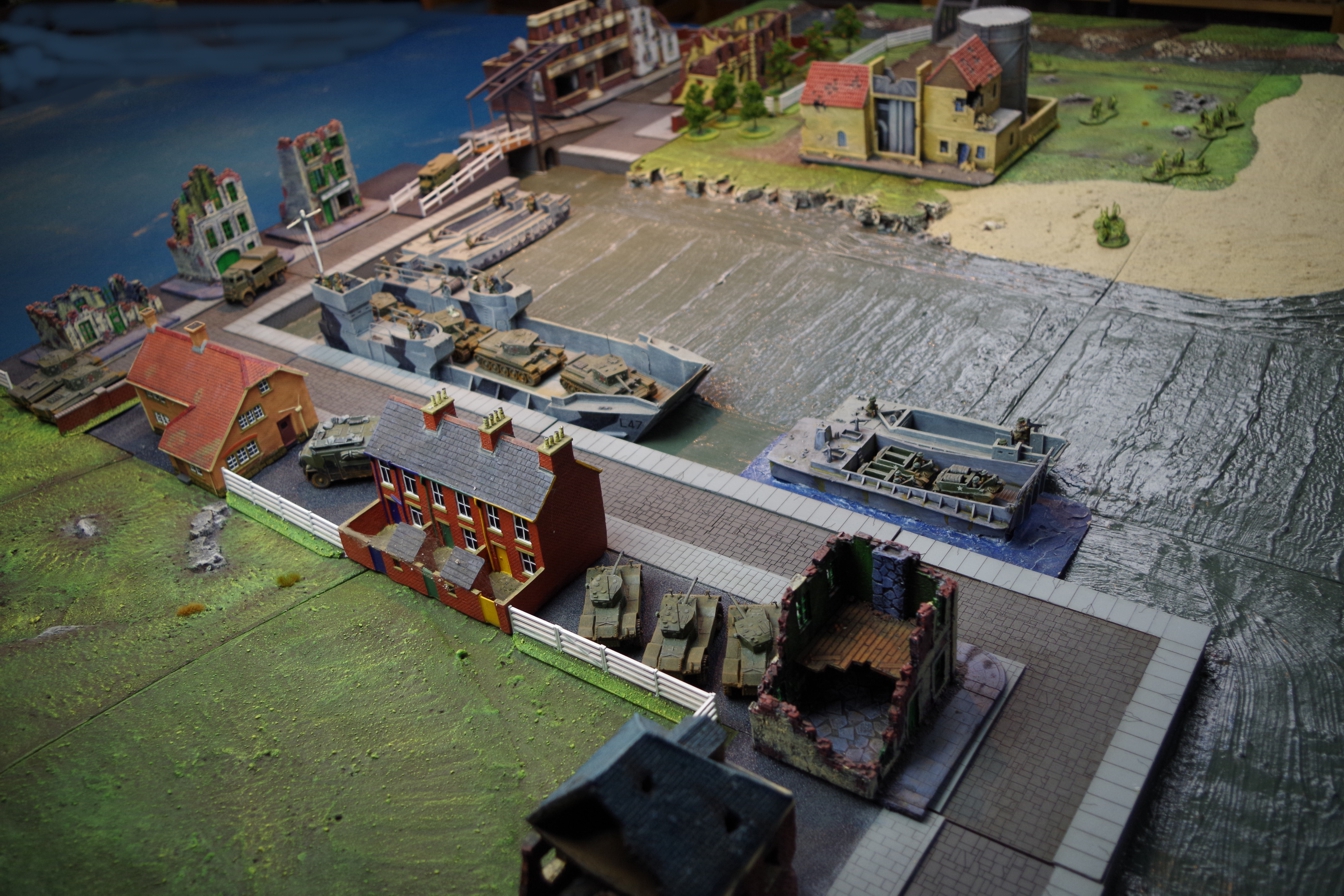 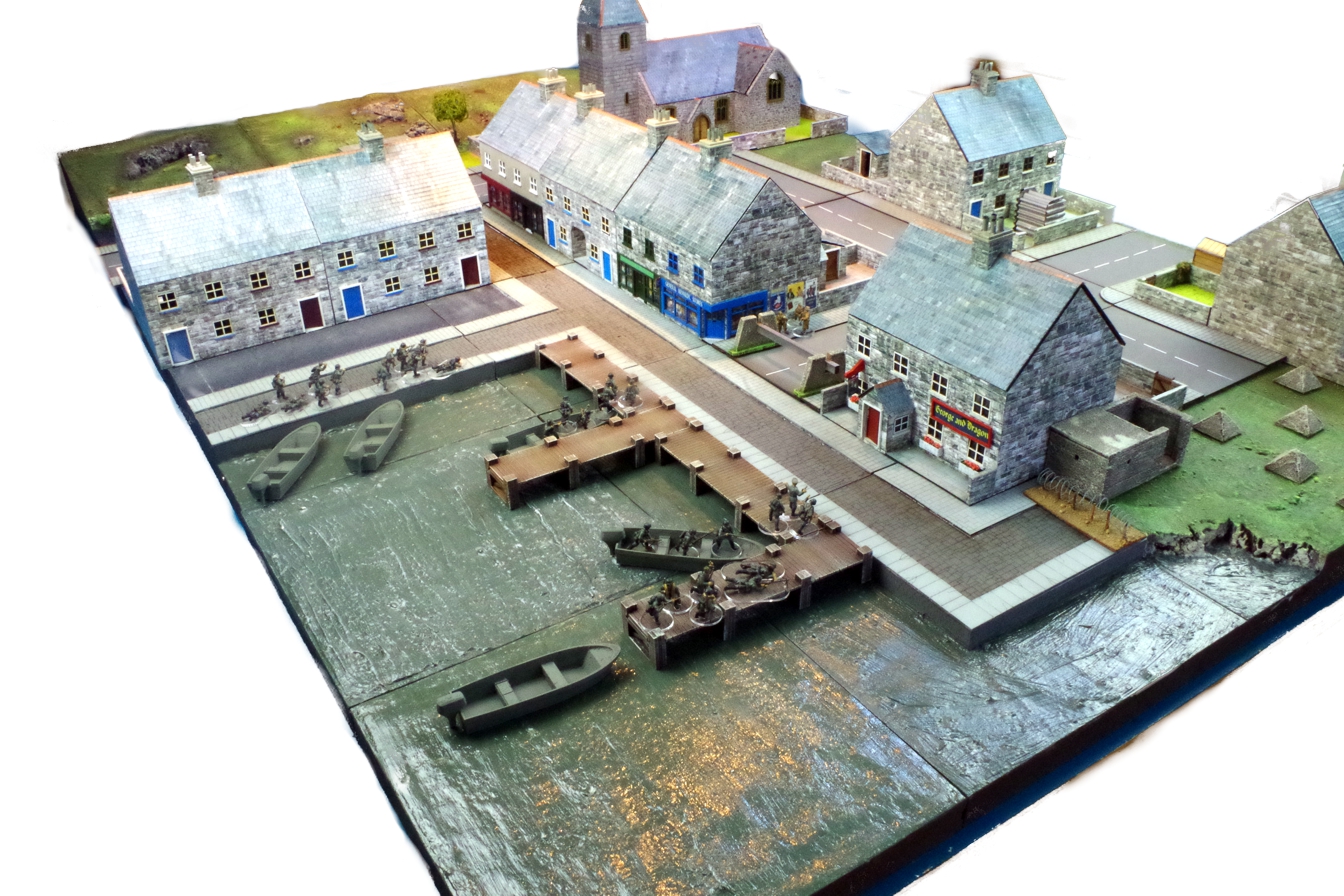 Our Kick Starter campaign was funded in the first couple of hours and since then we have been developing suggestions from backers to develop terrain tiles to suit a wide range of periods, scales and genres.

This year at the Joy of Six, we have something of a first, as there will be a game being staged by someone flying over from the USA.   Daniel Shaw is staging the Battle of Montelimar 1944 using his own Brigadier General Command rules, and it's going to be a cracker!   Here's Daniel's introduction to the game: 'BRIGADIER GENERAL COMMANDS wargame rules for the Second World War are designed for re-creating historical battles with miniatures in 1/300 or 1/285 scale.

Military history reveals that most battles were unbalanced in terms of the quantity of soldiers and equipment on each side. We set up our games to correspond to history at an interesting moment in time. You are then free to deviate from history, with new plans and actions. The excitement comes in battling to do better than history.

Living in Texas, it is natural that the author, Daniel T Shaw, would take an interest in the Texan Division. At the Battle of Montélimar, elements of the Texan Division, Task Force Butler, fought primarily against elements of the 11th Panzer Division. That is an exciting fight. Let us not forget, however, the French Resistance forces (FFI) without whom the battle might never have been won.

Background to the Battle In the Mediterranean area, the Allies had pulled off several amphibious attacks, developing the tactics and skills by using the same army units – 1942 Operation Torch took Algeria, July ‘43 Operation Husky took Sicily. September Operation Avalanche on the toe of mainland Italy. The Free French Armies took the island of Corsica with Operation Vesuvius also in September. Fighting up Italy was a hard struggle, despite the capitulation of the Italian Army, because of the rugged defensive fighting of the Germans, so another amphibious outflanking manoeuvre, Operation Shingle, landed at Anzio. While that attack struggled to breakout from the beachhead, General Clark had promoted Lucian Truscott from leading the 3rd Infantry Division to take command of VI Corps. Fred Butler, then Truscott’s assistant had moved up with him. 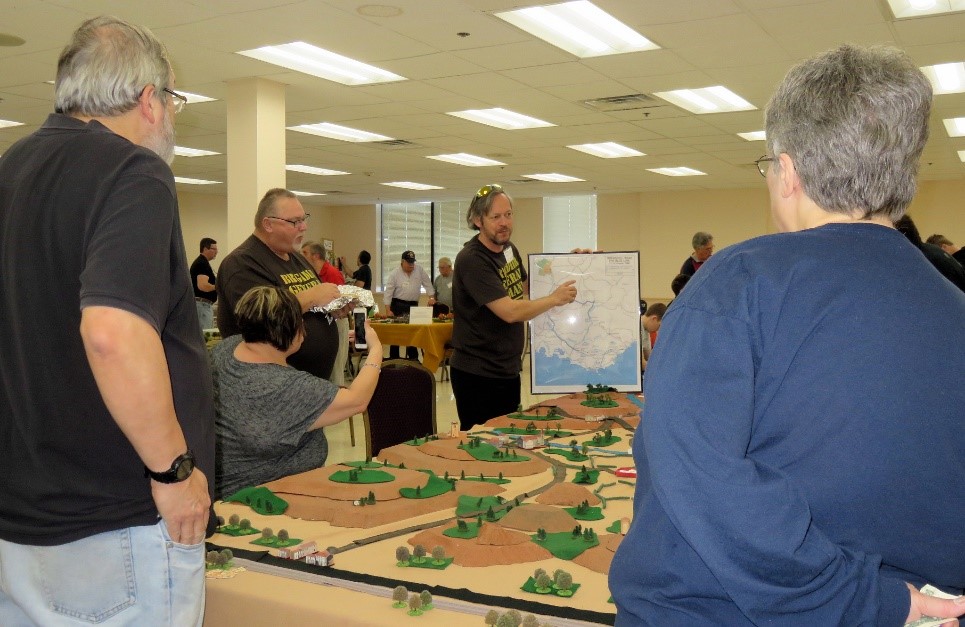 After the Normandy landings of June ‘44, the Allies again had trouble breaking out of the beachhead.

For Operation Dragoon, while the main army would advance West from the beachhead and then turn North up the Rhone Valley, Brigadier General Fred Butler would lead a Task Force to break out to the North and possibly cut west behind the Germans. 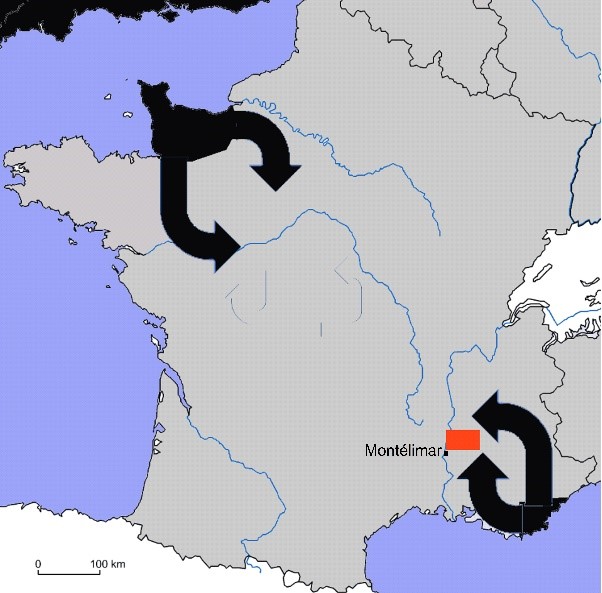 Recognising that the French Resistance were active in the area, the commander of the 757 Fortress Grenadier Infantry deploys to ensure that his forces can keep the supply route down the Rhone valley open.

Our battle starts in earnest on the morning of the 22nd August, when the commander of the 11th Panzer division, fearing he will be cut off as his colleagues in Normandy are experiencing with the Falaise Pocket, orders a counter attack against Task Force Butler.

Among the FFI forces, the Secret Army commanders are reluctant to act as regular infantry, but are determined to ambush the Germans. The French Communists are disgruntled, knowing that they have received very few arms drops, with no anti-tank weapons, and believe the Americans double-crossed them in the recent Vercors operation, where many French Communists died.

During the day, the Allies can call on air support, with Thunderbolts of the USAAF and the Free French flying operations from Corsica. That is a long flight, so don’t expect them to stay in the area long. Also, with the unexpected directions of attack, the risk of blue-on-blue must be considered.

Will Butler trap his enemy?  Or will the Germans keep their escape route open?

With this historical scenario, can you do better than history? 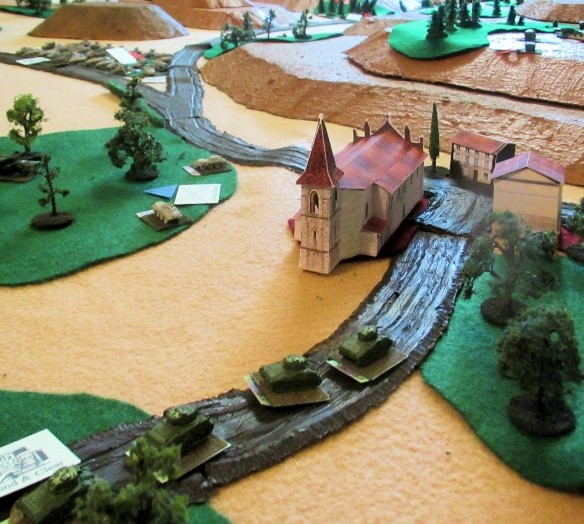 Copies of the BRIGADIER GENERAL COMMANDS will be on sale alongside the game.

The rules are simple enough to pick up, so do join in this participation game.'

Yet another reason to get yourself along to the Joy of Six this year.   We will only get to showcase a handful of the great games that will be on show, but you will not find a friendlier of more fun show anywhere in the UK.  Even if 6mm is not your thing, it's well worth the effort.

News On Barrage, Joy of Six

Due to injury of the caster and driver we are seriously behind with Mail orders, apologies for this, they will start to be shipped this weekend.

We are not able to take up our booked stand at Barrage in Stafford, so anyone hoping to see us there, sorry.

I will be at Joy of Six, but likely with only a limited stock, so pre-orders would be a good idea, and as an added incentive, if you email me an order for collection on the day, a 10% discount will be applied.

Apologies for the litany of woe folks.