Featured Game for JOS16: Megalomania on the Elbe 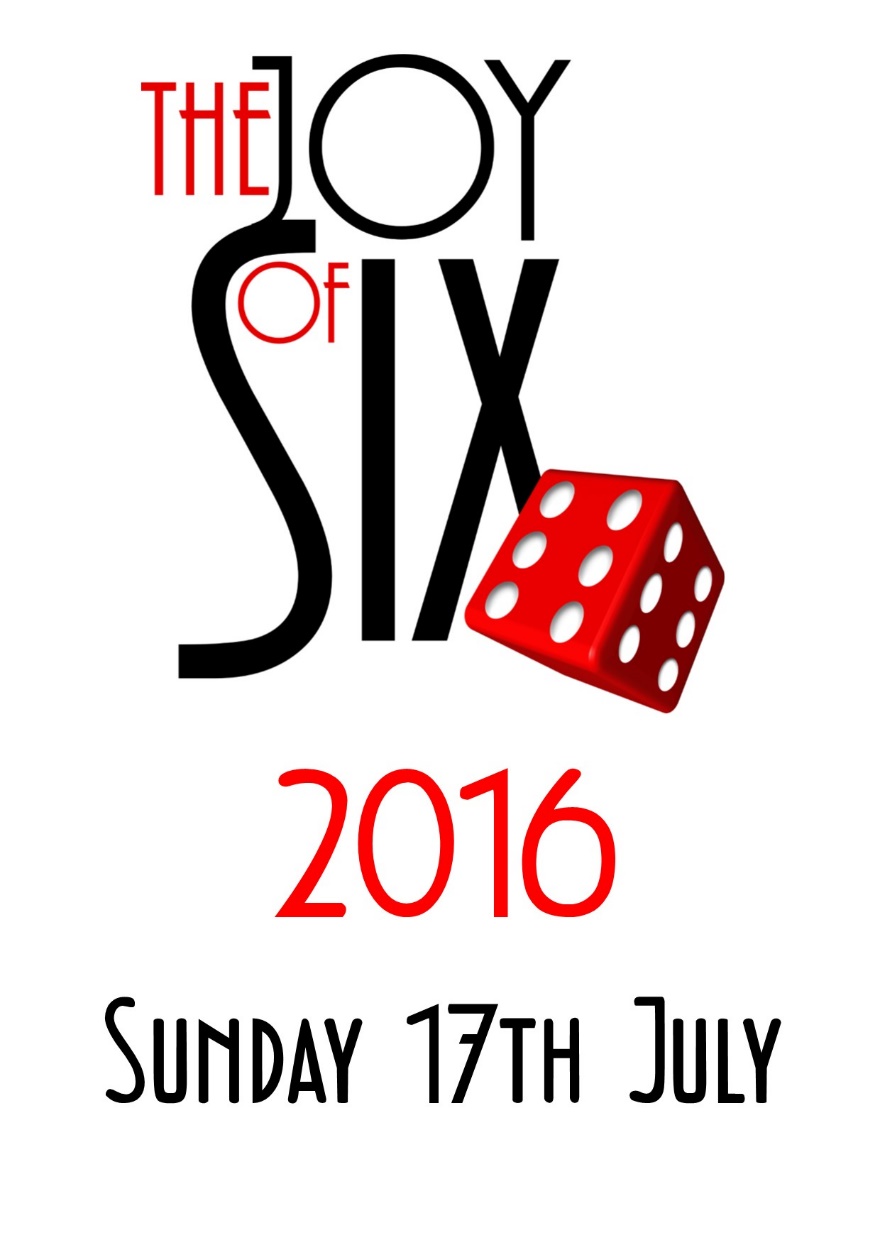 The Joy of Six 2016 will take place on Sunday 17th July at Sheffield Hallam University.  The show will present all that is best about this brilliant wargaming scale.  Here’s another preview of a game that will be staged at the Joy of Six 2016.  This time it's an epic Napoleonic presentation.  Over to Trev Crook of MADgamers to put you in the picture...
Seems to me that all good ideas happens on the way back from somewhere. The rush and adrenaline of what ever you went there for has gone, you can relax on the way home, and tomorrow's problems aren't real until tomorrow. That gives the mind time to wander in a careless 'what if' world.

So there we are, in the car on the long journey back from Sheffield's Joy of Six, driving home to Maidenhead, when some idiot says "what shall we do next year?" The minds whirl and start looking at what armies we have in 6mm, what periods, what small battles could we do which  'only require a few more figures to paint'? A few figures becomes a few battalions, becomes only a few brigades, becomes only a few divisions..... 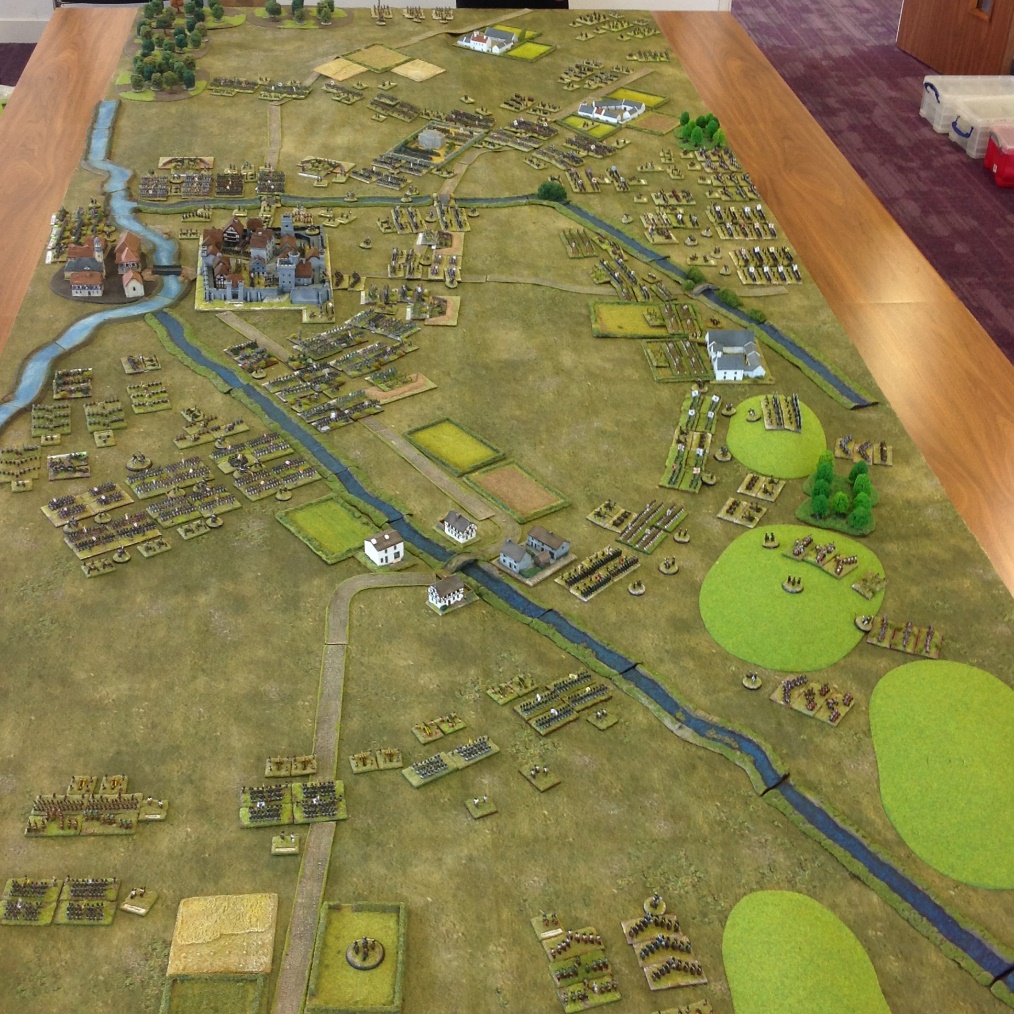 That's when the megalomania sets in. What would justify all our beautifully painted works of art? Napoleonics then. It would have to be big obviously, involve lots of our different armies, yet could consume every single figure we could ever paint. Waterloo? A year too late and others have already done spectacular versions. Besides, no one in the club has a single British figure!

So which battles have French (obviously), Russians, Prussians and Austrians, plus a few Bavarian, Poles....? Leipzig? Big enough! Everyone was there. From a practical point of view though, 3 different battles on 3 different tables? Have to be something we can do on one table. Dresden then! 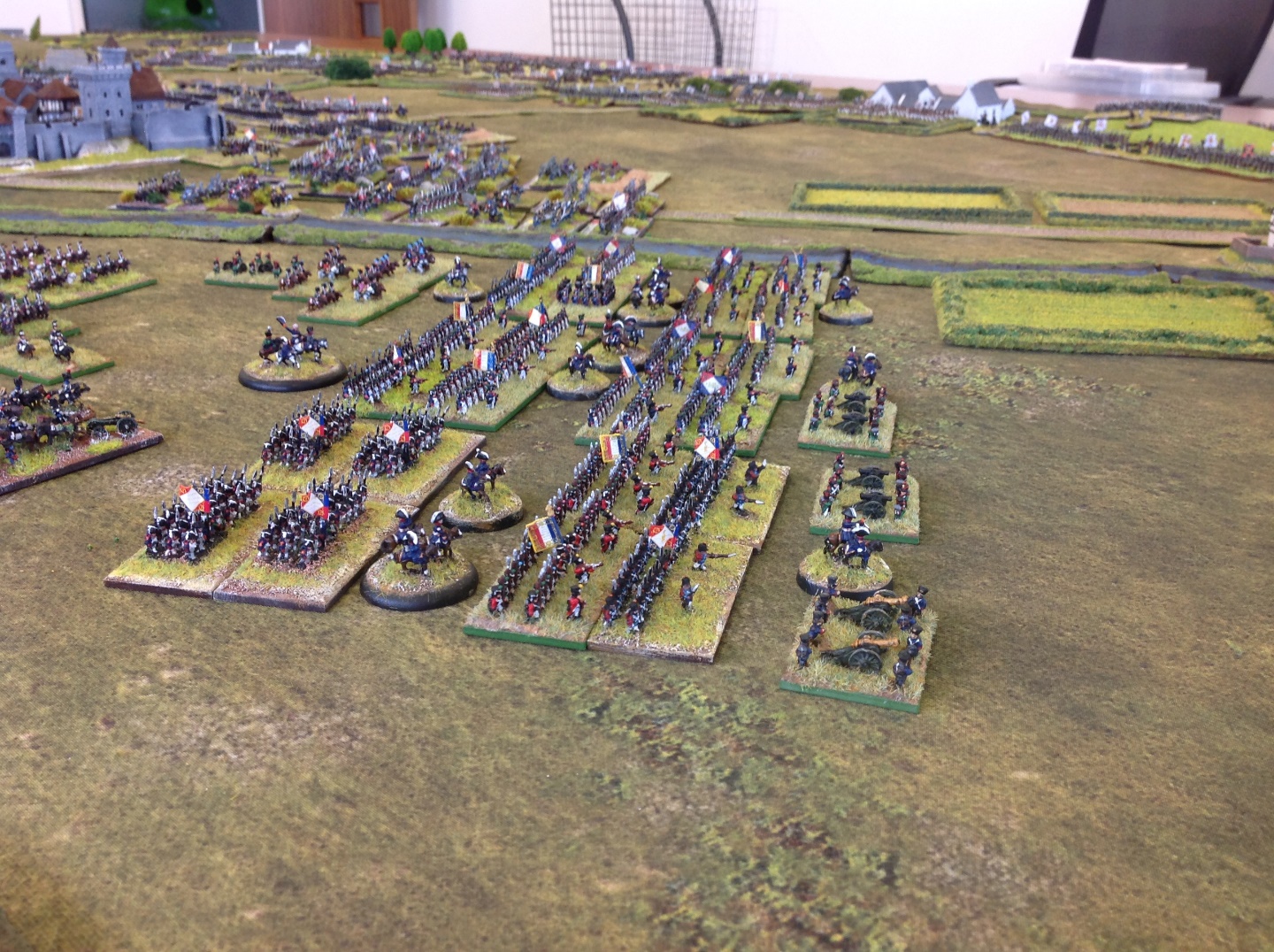 One thing we have learnt in running big games is try to simplify the OOB's, rules etc. Trying to remember the number of battalions in each brigade, and the characteristics of every general is something that goes out of the door when you have 100+ units a side. Therefore we standardise of 4 battalions/bases per infantry brigade and 3 to a cavalry brigade. This does mean not every single unit is represented but even in 6mm there has to be some small nod to playability. Depending which OOB you look at means there could be over 100 individual battalions and squadrons on the table for the Austrians alone.

We use Black Powder rules, with one or two small modifications for 6mm figures. All distances are halved. We have also experimented with shooting BEFORE movement. This gets away from marching up to an enemy unit and blasting it before it can get any closing fire off. We also test formations when they go over 50%, rather than at 50%. We found this enabled us to have more formations on the board, albeit each is slightly smaller.

Brigade generals are all rated at 8. Their Black Powder C-in-C is at Corps level. ie once a Corps commander fails an order, only that Corps is affected. Other Corps are effectively counted as a separate army, and may continue to issue orders to their own Corps only.

We ran this game at MADGamers with 6 of us, as an all day game. Unfortunately we won't have that many with us at JoS. Therefore on the day, we will probably concentrate the dice rolling around the French left wing.

This leaves plenty of other troops looking for generals. If you have never played Black Powder, we will be pleased to run you through a few plays to get the taste. Just ask and someone will walk you through and explain the mechanisms. Roll a few dice, we could do with some better luck! If you are familiar with Black Powder, and have a little time on your hands, we can give you a command to play for a while. This is not to commit you to the whole day, but to allow you to drop in, play a little and then wander off the spend more of your hard earned cash with Peter. Anyone that does want to play the whole day is also very welcome!

We’ll be showcasing some more of the games that will be on show at the Joy of Six over the next few days.  If you haven’t booked your weekend in Sunny Sheffield than you really need to get moving!

We will be attending UK Games Expo again this year, it would be great to see you there. However, we will probably NOT be taking many miniatures this year, so if you want anything please contact me prior to the event so I can bring it along.

What we will however be bringing along Have At Thee and our new game, Table Tantrums, which is currently available for pre-order.

What is UK Games Expo?

UK Games Expo aims to be the premier event in the UK where all aspects of the gaming hobby are represented under one roof:

The goal is to create a fun event which will appeal to families and the general public as well as the enthusiast. You arrive, you wander around the trade stands, try out any games you wish, sit in on the seminars or join in with the tournaments These are the main elements:

On Thursday evening from 7pm we will provide some space for Open Gaming. Bring your own games. There is no trade opening on Thursday.

The show at the NEC Hilton Metropole (organised play and evening gaming) and the NEC (Trade Hall).
Find out about Carparking here.

As part of the build up to this year's extravaganza, we'll be showcasing some of the games that you can expect to see.  We'll kick this off with a preview of Per Broden's 'Saga in 6mm' game.

Per is now famous for this show-stopping productions of Great Northern War battles, but this year he has opted for a complete change albeit with a Scandinavian focus.  I an do now better than to hand to over to the man himself.

'I have been putting up 6mm wargames tables at the Joy of Six for the last four years with the Wyre Forest Wargames club (WFWC). They have been depicting various battles from the Great Northern War (GNW).  This year (to save me from tears) I have decided to do something else.  The main reason was actually due to the fact that my good friend (and authority on all things warfare in general and the Great Northern War in particular)

Nick Dorrell could not make this show and it felt strange not having his guiding hand to oversee the practical matters of running the game.  But I hope we will be back with some GNW action next year and do the interesting battle of Lesnaya 1708 (but things have changed before). I will be back with some GNW postings once the Joy of Six 2016 and the 6mm Saga adventure have come and gone as there is still plenty to do before July.

Since Baccus released their early middle age range with Anglo-Saxons, Vikings and Normans I have wanted to do a dark age project.  I noted a mention on the Meeples and Miniatures page about doing Saga in 6mm – it made me think for a second or two.  As many others I am better at buying figures than painting them and really wanted some kind of challenge and a clear deadline – so I decided to do Saga in 6mm.  Here is my blur I submitted to the Joy of Six show just before Christmas last year.

“This participation game allows the player to try out Studio Tomahawks Saga rules in 6mm, using one of the 12 factions from the basic rules and the first two supplements (Anglo-Danes, Norman, Viking, Welsh, Anglo-Saxons, Irish, Strathclyde Welsh, Norse Gael, Bretons, Jomsvikings, Scots or Capetian Franks).  The warbands are pre-selected and are all at 4 points.  Each individual model from the normal rules are replaced with a 25mm square base with 3 to 10 models, depending on type of unit.  The game is more or less played as normal apart for some changes to distances (movement and range combat).  Prior knowledge useful but not required.  We run each game to conclusion or an hour (whatever occurs first). We will play 3 or 4 games per table during the day – further details will follow. The terrain boards, although not historical, will be in line with what we normally do for the Great Northern War stuff.   There will be a few hills, forests and a small Viking or Saxon settlement somewhere in the background.” 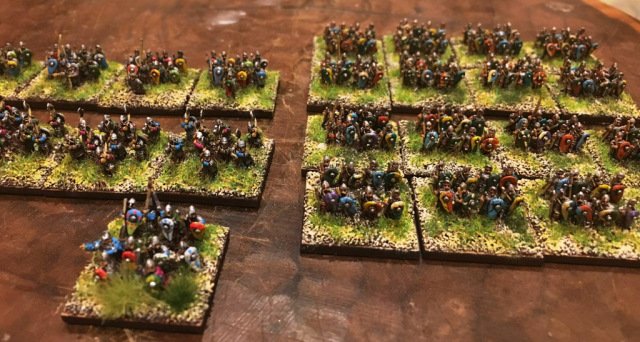 Since then I have completed all but one faction, done two 3 by 4 feet mats and have some terrain to complete.  In future parts I will go through the factions and what models I used, how I painted them, how I made the terrain mats we will use on the day and some of the terrain pieces.  All in all the project have resulted in 324 bases (the equivalent of over 100 Polemos bases) and a total of 2155 miniatures – they are small but many.

Being a long time listener of the Meeples and Miniatures Podcast and having had a chat or two with Neil Shuck over the years I decided to approach him and David Luff at Salute – knowing they liked the game. I asked them if they wanted to help out on the day and they said yes – I am not sure who was the happiest at the end of the day – my son who got to try out the new Halo Ground Command game or I.

When Mike Hobbs (as documented in the Meeples and Miniatures Podcast No. 170) decided to join and help it really made my day.  I just have to finish a few things and we should be good to go.'