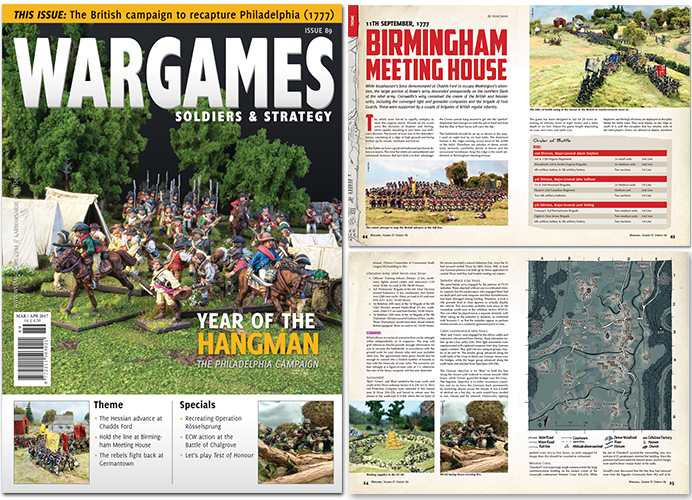 The new issue of WS&S is currently at the printer. We've got several themes planned in 2017 that commemorate a historical anniversary, and this is the first one: we take a look back at 1777, 'The Year of the Hangman'. Our theme focuses on the Philadelphia Campaign during the American War of Independence. Steve Jones, author of the AWI supplement for Black Powder, gives us a series of battles for this pivotal year, including Birmingham Meetinghouse, Battle of the Clouds, and Germantown. We've got some pretty juicy off-topic articles as well, which include a scenario for the ECW battle of Chalgrove Field, and an extremely thorough look at how you can recreate Operation Rösselsprung (A German attempt to capture Tito during WWII). As usual, you can find a complete summary of the issue's contents on our website.

Karwansaray magazine News wss
This entry was posted on Tuesday, February 7th, 2017 at 11:18 and is filed under News. You can follow any responses to this entry through the RSS 2.0 feed. You can skip to the end and leave a response. Pinging is currently not allowed.

One thought on “Wargames, Soldiers & Strategy”