Welcome To The New World

A major change has happened to our website this week – our range of Victorian sci-fi flying craft has moved under the banner of Imperial Skies, to more closely tie them to the rules. All the product codes remain the same, but web addresses have changed – we’ve set up a series of redirects so that hopefully anyone who clicks on an old link should be redirected to the new location. Click on the logo below to go to the new Imperial Skies section of the website.

This is probably also a good time to set out our plans for the range over the remainder of this year (and almost certainly stretching into 2022). When we finished our redesign and remoulding of all of the major powers at the end of 2020, Phil and I discussed two options going ahead. The first was to move onto the remaining European nations that still needed resculpts, such as Austria-Hungary, the Ottoman Turks and Belgium. This would also involve some new fleets such as the Greeks, Portuguese and the Balkan countries. Option two was to concentrate on the South American continent instead, resculpting the existing models and adding some smaller nations.

In the end we went for plan B and set course for the New World. This will involve redesigning the Brazilian, Argentinian and Peruvian fleets, who along with the Chileans are the major players in the region. The other six countries – Bolivia, Columbia, Ecuador, Paraguary, Uruguay and Venezuela – will all get fleets of varying size. And during the timeline of Imperial Skies, Britain, France and Holland all still have substantial colonies on the continent (British Guyana, French Guiana and Suriname respectively) so that seems like a good excuse to add some specific new vessels to those fleets.

We’ve divided the nations into three tiers by looking at their relative sizes, populations and GDP at the end of the C.19th, along with their real-life military strength at the time, particularly their wet navies. The most powerful nations will get a couple of capital ships plus cruisers and escorts, the second rank ones will get a battlecruiser or maybe a small or obsolete battleship while the lowliest fleets have nothing larger than a cruiser.

One design decision we made early was exclude fighter carriers. Flying fighter carriers are expensive to build and maintain in the world of Imperial Skies, and we decided that they would be beyond the means of the nations involved here. They will still have fixed-wing aircraft, often sourced from abroad, but they will mainly operate from surface airfields or in some cases water (I have great plans for the Lake Titicaca Seaplane Squadron !).

The first releases were going to be at Salute in April, and then more models were to be pushed out over the rest of the year. But lately we’ve all learnt not to make plans, as any number of things can get in the way ! Salute didn’t happen, and various lockdowns have delayed us a little. We’re a bit behind on our intended timeline, but we’re ready to make a start. We’ve already finished design work and mastering of the Argentinian and Brazilian fleets, and most of the production moulds for those fleets are ready to roll. We’ve also finished the first of the brand new navies, Ecuador. All of these models are just waiting for us to paint up samples for the website, then we’ll be ready to roll. Here’s a look at a new Brazilian battleship, the Rei Andreas: 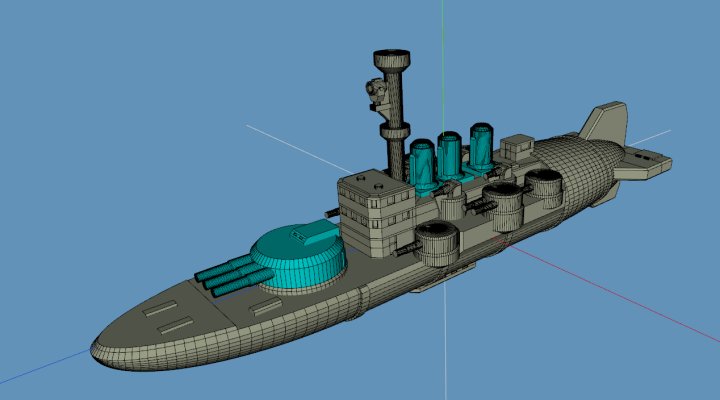 Brigade Models News Sci-Fi
This entry was posted on Tuesday, July 6th, 2021 at 13:53 and is filed under News. You can follow any responses to this entry through the RSS 2.0 feed. You can skip to the end and leave a response. Pinging is currently not allowed.

One thought on “Welcome To The New World”