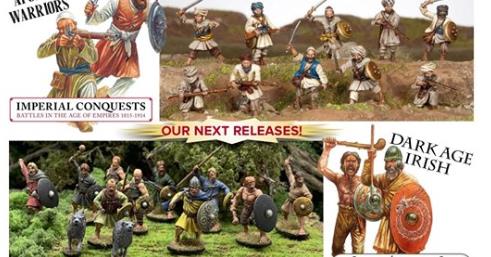 It has been a wild journey since we started out with our first two hard plastic sets last June: the Raumjäger Infantry and the Skeleton Warriors. March will see the release of our 5th, 6th, and 7th sets: Persian Infantry, Afghan Warriors, and Dark Age Irish. World War One Germans are next up after those to make 8.

And when you consider the other two sets are Halfling Militia and Les Grognards, you might be asking just what we’re up to and what is the plan going forward? Trust us, there is an actual plan!

First, there is a sci-fi range: Death Fields which you can read more about on their page here on the site. The first two sets are the Raumjäger and Les Grognards. These will be followed in the next few months with a 3rd faction. Once we’ve covered the standard infantry sets we plan to add heavy weapons and more support to each faction.

Second, there is our Classic Fantasy range. The idea behind Classic Fantasy is pretty much just what it says on the tin: classic races and creatures from old school fantasy like Tolkien and Dungeons & Dragons. We’ve started with skeletons and recently added the halflings. These aren't your silly, pot-bellied, rolling pin-wielding types but a gritty, battle-hardened militia that fights off the very real and very dangerous threats to their homeland - the undead, goblins, trolls, giant spiders, evil humans, and the occasional dragon. We will continue to release sets for the Classic Fantasy range on a regular basis with a long, long list of topics that should appeal to both D&D players and fantasy wargamers.

Third, or perhaps I should say third, fourth, fifth, sixth, seventh, and on!, there are our historical ranges. We’ve set out to do things a little differently than others. The established plastic makers tend to have a lot of the core troops with other parts of the ranges covered by metal packs. As we start out we would like to fill in some of those gaps with hard plastic sets and establish ranges that we can add to on a regular basis. There are also several periods that seem to be crying out for plastic that only exist in metal presently.

News wargames atlantic
This entry was posted on Saturday, February 1st, 2020 at 10:07 and is filed under News. You can follow any responses to this entry through the RSS 2.0 feed. You can skip to the end and leave a response. Pinging is currently not allowed.