Games Are Supposed To Be Fun 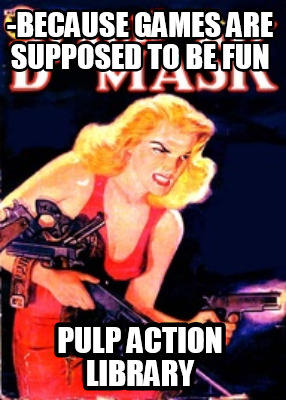 Pulp Action Library is a massive international corporation operating from the 87th floor of a skyscraper in Manhattan or two guys working out of their spare bedrooms three thousand miles apart - you’ll have to decide which!

Howard Whitehouse is a British game designer, novelist and historian based in New York’s Hudson Valley.

Roderick Robertson is an old hippy living among the oaks and pines of the Sierra Foothills of California, and a wargamer, role-player and rules mucker-outer.

Between them, they have more than half a century of designing games, and more than that reading them, playing them, and generally messing about with them. And they have come to a conclusion:

Games are supposed to be fun.

News Pulp Action Library
This entry was posted on Sunday, December 25th, 2016 at 08:15 and is filed under News. You can follow any responses to this entry through the RSS 2.0 feed. You can skip to the end and leave a response. Pinging is currently not allowed.