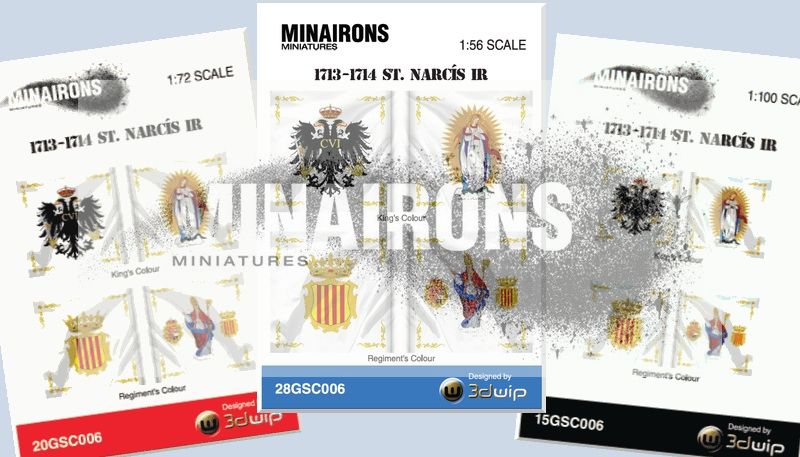 It's been an unusually long time since my last news update, but there was a strong (and hard!!) reason behind --Minairons miniatures has moved headquarters to a new address.

So as to celebrate the move is over (finally!), we've restarted activity by releasing a new set of War of Spanish Succession flags --devoted to an Austro-Catalan infantry regiment officially named "Saint Narcissus", but also known by locals as "German infantry".
The set has been released simultaneously in 1/100, 1/72 and 1/56 versions altogether, following our purpose to develop all three ranges simultaneously.

These, and some other designs that had been previously held as under pre-order, are now available as DIN A7 sized PDF files, that can be downloaded for €2.00 and auto-printed at will.

In the next months we'll keep developing these new, multi-scale PDF ranges focusing on the peninsular armies of WSS (both sides Spanish and Portuguese mainly).

Thanks for reading,
Lluís
Minairons miniatures

historical minairons New Release wss
This entry was posted on Wednesday, February 27th, 2019 at 09:52 and is filed under News. You can follow any responses to this entry through the RSS 2.0 feed. You can skip to the end and leave a response. Pinging is currently not allowed.