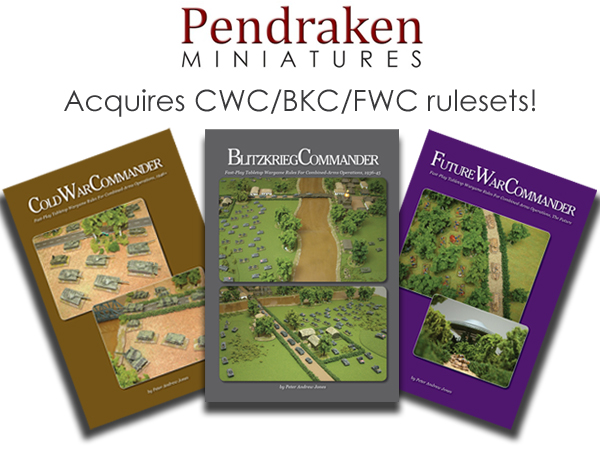 Since its launch in 2004, Blitzkrieg Commander has become the most popular ruleset for gaming WWII in 10mm scale. Pendraken’s WWII ranges are the most extensive available on the market, covering 10 nations with over 600 codes, so it made perfect sense to combine these rules with our miniatures.

Cold War Commander was launched in 2006 to cover the post-war period through to the modern day, and with our recent expansion into these areas, it will be great to have a ruleset to accompany these new ranges.

Future War Commander was the final release of the three rulesets, adding a Sci-Fi version to the family. Pendraken have some ranges already in place, but we’d like to work on these in the coming years to really expand and complement this excellent ruleset.

The sale to Pendraken also includes the BKC website and forums as well, including the Battlegroups Online service. For the time being, we will be keeping everything in place as it is, so people will still be able to visit the Blitzkrieg Commander website (www.blitzkrieg-commander.com) and enjoy the fantastic resources and forum hosted there.

The rulesets are currently out of print, but over the coming months we will be doing some work on them in preparation for a new print run towards the second half of 2015. Keep checking on either the BKC or Pendraken forums for more news on this as we progress.

For those wanting to purchase the rules in the meantime, we will be keeping the Lulu print-on-demand service up and running for those who are looking to get a hardcopy of any of the three rulesets. Unfortunately the pdf versions will no longer be available through the Blitzkrieg Commander website (due to the new pdf legislation), but they will soon become available through Wargame Vault. Again, keep an eye on either of the forums to hear more news on that.

Finally, all of us at Pendraken Miniatures would like to place on record our thanks to Pete Jones, not only for offering us the fantastic opportunity to acquire these rulesets, but also for the time and effort he has put into growing 10mm as a popular scale for gaming the 20th Century and beyond.

News pendraken rules smp
This entry was posted on Tuesday, February 17th, 2015 at 09:56 and is filed under News. You can follow any responses to this entry through the RSS 2.0 feed. You can skip to the end and leave a response. Pinging is currently not allowed.