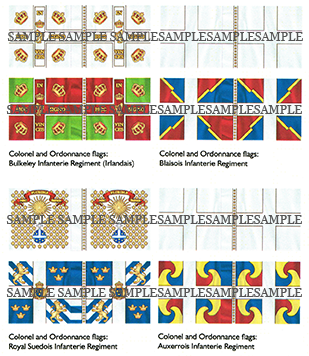 Fighting 15s has released 30 sheets of 15mm paper flags for Ancien Régime infantry. The flags are suitable for French infantry from the Seven Years War right up to the Revolutionary Wars.

Each sheet costs £4.00 including VAT and sheets typically contain 12 flags – six white Colonel’s flags and six coloured Ordonnance flags. Flags are in Fighting 15s’ new shaded style, introduced for the Austrian Seven Years War infantry flags, and the stitching has been emphasised on the Colonels’ flags so they look more than just a white flag.

The flags have been designed in particular to suit Eureka’s Seven Years War French to give a good fit around the flag staff. The accompanying images are of lower resolution than the actual flags.

Fighting 15s is in the process of reorganising the flags section of the online shop, and this is the first part of Fighting 15s’ flags range to be fully illustrated on the site.

Fighting 15s historical New Release
This entry was posted on Sunday, June 28th, 2015 at 14:24 and is filed under News. You can follow any responses to this entry through the RSS 2.0 feed. You can skip to the end and leave a response. Pinging is currently not allowed.