It's been a long time coming, but it's finally here!

Blitzkrieg Commander is one of the most popular WWII rulesets of the past decade with over 5000 copies sold and we're delighted to announce that the highly anticipated 3rd Edition is now available for pre-order!  We'll officially be launching BKC-III at the Salute show on 22nd April, but if you won’t be attending the show you can pre-order your copy in advance, ready to ship out on Monday 24th.  And as an added bonus, we've got a special discounted launch price of £20! (RRP £25)  This launch offer will only be available until Sat 29th April, so head over and grab your copy now: http://www.pendraken.co.uk/Rules-c37/Blitzkrieg-Commander-III-sc362/ 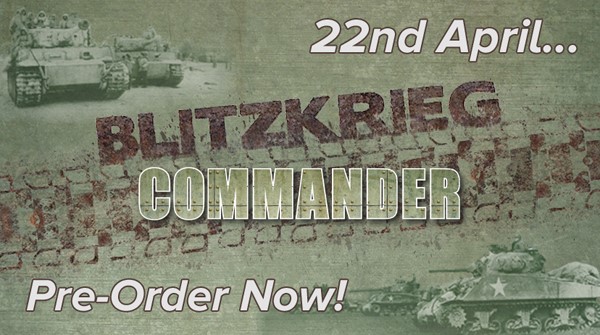 Blitzkrieg Commander III
- Suitable for any scale miniatures, from 2mm right up to 28mm.
- Simple command system that emphasises the fog of war.
- Effective mechanism for casualty resolution.
- Flexible figure ratio meaning one base represents a platoon.
- Minimal setup time, simply assemble your forces and play.
- Contains 49 army lists covering all nations and theatres.
- Includes 15 scenarios.
- Suitable for solo, two player or multi-player games.
- No supplements, everything you need to play WWII games in one book.
- Quick Reference Sheet included.

Generally, this 3rd Edition remains true to the BKC you're familiar with, but with a bit of a refresh on the text.  All of the core elements remain in the game and everything should run much the way it always has.  Things that you may find work slightly differently include:

If you know and love Blitzkrieg Commander already then BKC-III should hopefully feel familiar but fresh to you.  For those new to these rules, grab yourself a copy and see what everyone is talking about!

To pre-order yourself a copy, you can either buy directly through our website here: http://www.pendraken.co.uk/Rules-c37/Blitzkrieg-Commander-III-sc362/ or by contacting us using the Contact form on our website: http://www.pendraken.co.uk/Contact.aspx.  For anyone attending Salute, you can also pre-order a copy to collect on the day by contacting us through that same Contact Us method.

For those who prefer their rules in a digital format, BKC-III will also be launched as a pdf download on Wargame Vault on the same day as Salute, so Sat 22nd April.  We'll also have a range of 1000pt Starter armies ready for the launch, more details on those coming soon.

New Release pendraken WWII
This entry was posted on Monday, April 3rd, 2017 at 07:53 and is filed under News. You can follow any responses to this entry through the RSS 2.0 feed. You can skip to the end and leave a response. Pinging is currently not allowed.