We are now the main source for physical products from Dastardly Design Games to include their miniatures line.
They currently have two games in printed form.

When the Navy Walked - WTNW is more than just a Victorian Science Fiction Game. It is a springboard for imagination and a high-level game of tactics and battles set amongst a 'what if' world inspired by the classic authors of Victorian Science Fiction and Retro Science Fiction. In WTNW, players take the reins and command massive armies of men, fantastic beasts and steam-driven vehicles of leviathan proportions. In the end, the thunder that cascades across the battlefield to settle in the souls of the fighting men will only be assuaged with the assistance of the landship. 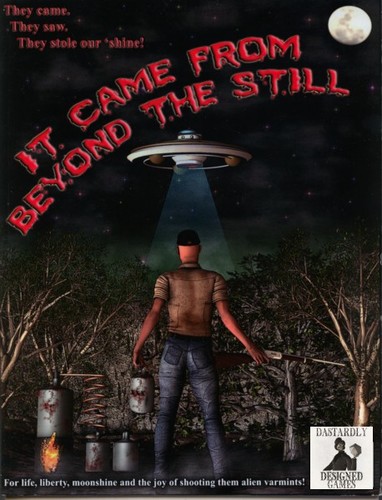 It Came From Beyond The Still - ICFBTS - Aliens vs. Hillbillies is a non-stop action-filled tabletop miniatures game that is full of hilarity and combat between alien varmints and the Hillbilly moonshiners. As if the aliens weren't bad enough, if you are a hillbilly you have to look out for the Revenuers and the other authorities. Luckily, you have the Men in Plaid on your side to even the power as well as some Hillbilly cool powers that are sure to surprise even the jaded shiner.

These are currently available in the store, so go and check them out:

Lone Gunman Games New Release Sci-Fi
This entry was posted on Thursday, February 26th, 2015 at 11:12 and is filed under News. You can follow any responses to this entry through the RSS 2.0 feed. You can skip to the end and leave a response. Pinging is currently not allowed.