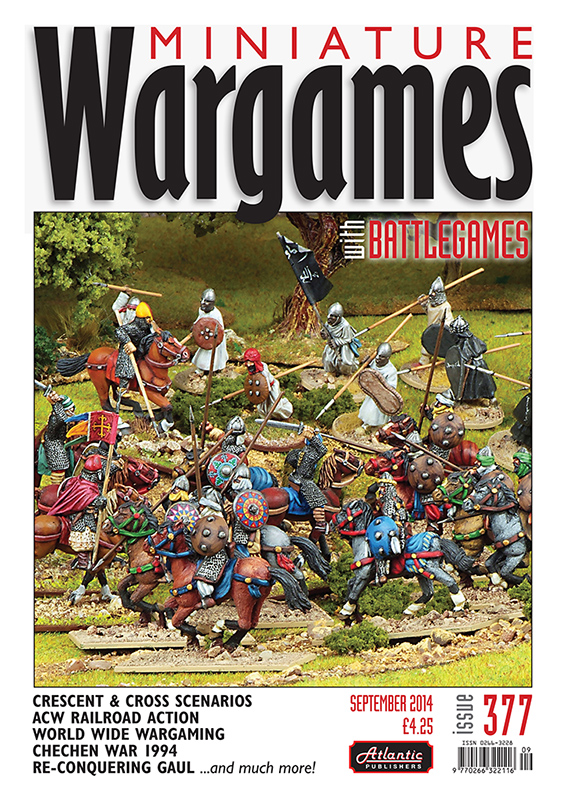 Scheduled to be published next week, on 22nd August, issue 377 is packed to the rafters as usual.

Briefing: The Editor responds to correspondence received after the last issue and considers the effect the Internet has had on our hobby.

World Wide Wargaming: A new column by the Editor takes a regular reconnaissance flight over the digital front line, where our hobby is evolving at the speed of light, together with technical tips for coping with Internet challenges.

Forward observer: Neil Shuck has been joyfully feasting on the annual 6mm- fest in Sheffield, getting excited about digital rulesets, testing SAGA alternatives and finally froths about tank games!

Getting into a paddy: Diane Sutherland avoids getting her feet wet this month – just! Skirting on the fringes of south-east Asian scenery, she masters mowing astro-turf and finds a path through the undergrowth for husband Jon.

‘Twixt crescent and cross: Matt Moran delivers a stunning series of scenarios designed for Gripping Beast’s latest SAGA supplement The Crescent & The Cross, but equally suitable for any rules dealing with the Crusades or Byzantine Empire. Maps by The Editor, photos courtesy of Gripping Beast.

The bridges at Monocacy: Robin Miles presents an exciting ACW scenario that will have you rummaging for your train sets as well as your wargame figures! Can you grab the twin bridges before the enemy?

Wargames photography: The Editor returns to a subject previously raised in issue 361, because he’s received so many requests for advice in the interim! Here then is the start of a mini-series providing more top tips for getting the best results from your hobby snapping. In this issue, we look at lighting and how to correct it.

Send three and fourpence: Conrad Kinch gives some sage advice about how to encourage newcomers to try our hobby, rather than scaring them away!

Re-conquering Gaul: Jim Webster reprises the playing card campaign system he revealed in issue 368 to provide a stunningly simple but effective way to generate exciting scenarios for the fall of the Western Roman Empire.

The importance of magazines: Jonathan Aird fell in love with wargaming magazines at an early age, and has never looked back. Here, he shares his story of his first contact with the hobby press.

Bovington 2014: John Treadaway takes himself and his camera away from the traffic of South London to the vast assemblage of armoured vehicles at Bovington for this year’s wargaming extravaganza amongst the tanks.

The trader’s survival kit: Anyone who’s ever manned a pitch at an event will have their own list of vital kit to pop into the car before setting off. If you are considering running a stand at a show for the first time, you might like to take note of the personal survival kit suggested by Helena Nash.

The Chechen War 1994: The events in Eastern Europe are now, amazingly, 20 years in the past and many wargamers are therefore more comfortable approaching this conflict with a gamer’s eye. Dave Tuck explains the Grimsby Wargames Society’s approach, with photos by Malc Johnson.

Combat Stress Appeal: The Editor delivers an update on the latest progress of our appeal, including the recent eBay auction.

Hex encounter: Brad Harmer is muttering to himself again. Listen: “The teacher has become pupil has become the mast...Hang on, I’ll come in again...” What’s it all about? Find out here.

That should keep you going until the next issue — enjoy the rest of the summer!

MWBG New Release
This entry was posted on Wednesday, August 13th, 2014 at 15:55 and is filed under News. You can follow any responses to this entry through the RSS 2.0 feed. You can skip to the end and leave a response. Pinging is currently not allowed.