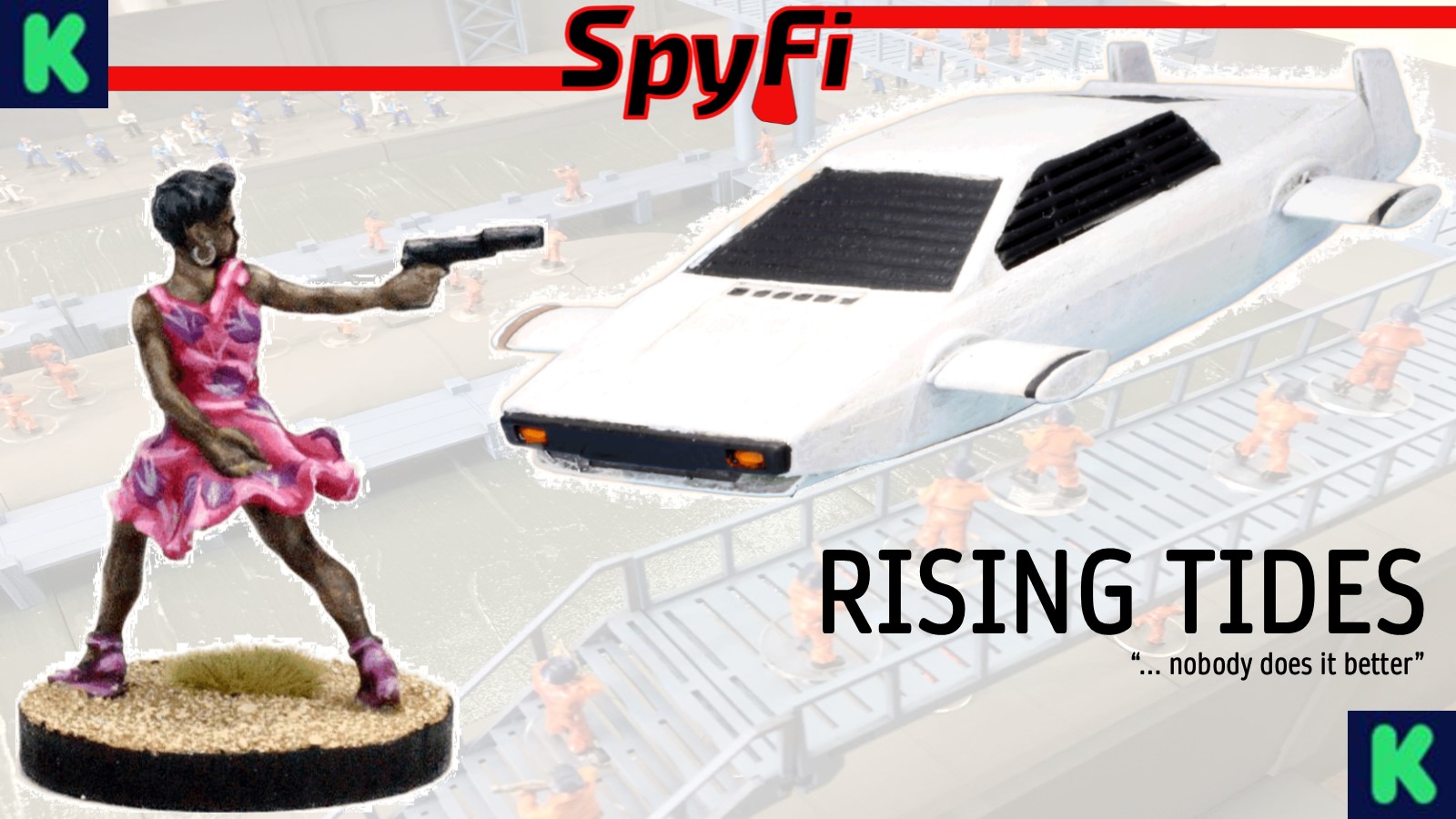 44 years ago in 1977 I can remember going to the cinema to see the new Bond film, ‘The Spy Who Loved Me’. It was a thrilling experience, Roger Moore’s third appearance as Bond and Barbara Bach co-starring as Agent XXX in the spirit of Perestroika and Glasnost working towards a common goal. The Spy Who Loved has remained one of my favourite Bond movies with the exhilarating down hill ski chase at the start, the Lotus Esprit that turns into a Submarine and that breath-taking climatic battle in the submarine pen constructed inside the worlds biggest container ship. I’ve always felt that battle epitomised Bond and that it would make a fantastic tabletop miniatures game, apart from… no one made the miniatures for 1970’s British, American & Soviet Submariners or Strombergs Crew in there distinctive boiler suits and berets… and the terrain was pretty challenging… until now.

Rising Tides in our fifth Classic Movies inspired Kickstarter and is all about 28mm Spy-Fi action on and under the water. We have taken ‘The Spy Who Loved Me’ as a starting point and inspired by it have produced miniatures for our favourite Commander RN, together with RN & Soviet Submariners armed with SMGS, Stongbergs Crew in Boiler Suits and Berets, the famous WetBike, a slick sportscar with a submarine version and a set of terrain that is modular and can be used to build that famous submarine pen with its gantry, stairs, control room, jetties and submarine. We have designed the terrain with modularity in mind and the pieces are all compatible with our existing Terra-Former Modular terrain, held together by rare earth magnets. The pieces can be taken apart and used to make a marina, starship hold, giant warehouse, runway and many other layouts. Check out our Terrain Video to see what we mean.

A speedboat chase is another staple of the Bond movie. Rising Tides presents three classic speedboats that have featured in one or more Bond Movie, The Sunseeker-XS2000 with a top speed of 65 knots seen in Casino Royale, The Glastron Carlson CV23HT seen in Moonraker and the Glastron-GT150 which we see taking to the air in Live and Let Die.

We have a number of stretch goals sculpted up and ready to go. Inspired by Thunderball we have some male and female scuba divers armed with fighting knives and harpoon guns together with a supporting Zodia RIB dive support boat. Royal Marine Commandos are always a handy support option for Commander Bond, so we sculpted a set of Commandos sculpted to go inside a Zodiac and another set on foot, sculpted in beach assault rig with SLR, ’58 pattern webbing and assault vests.
Kickstarter is running until October 21st. 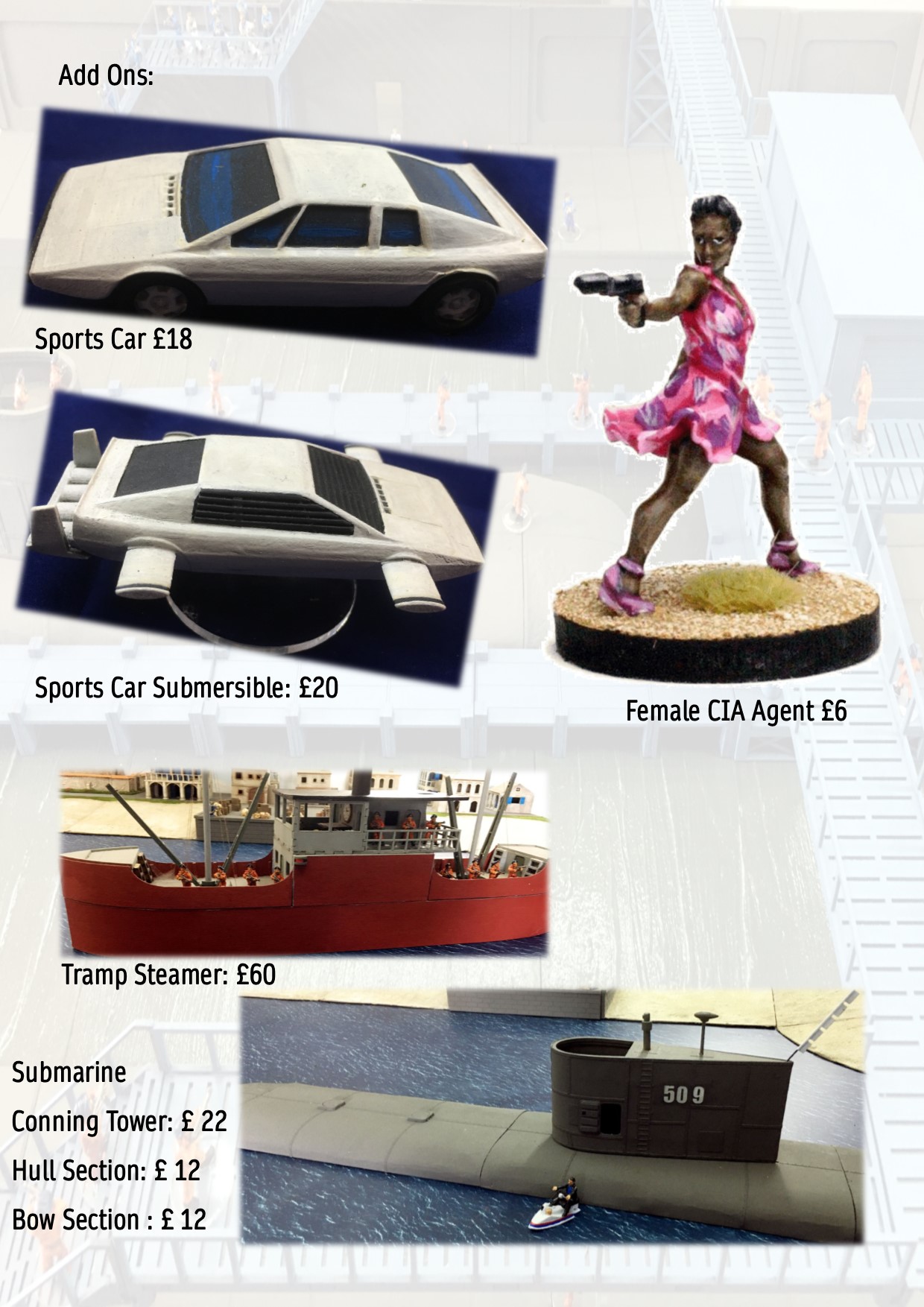 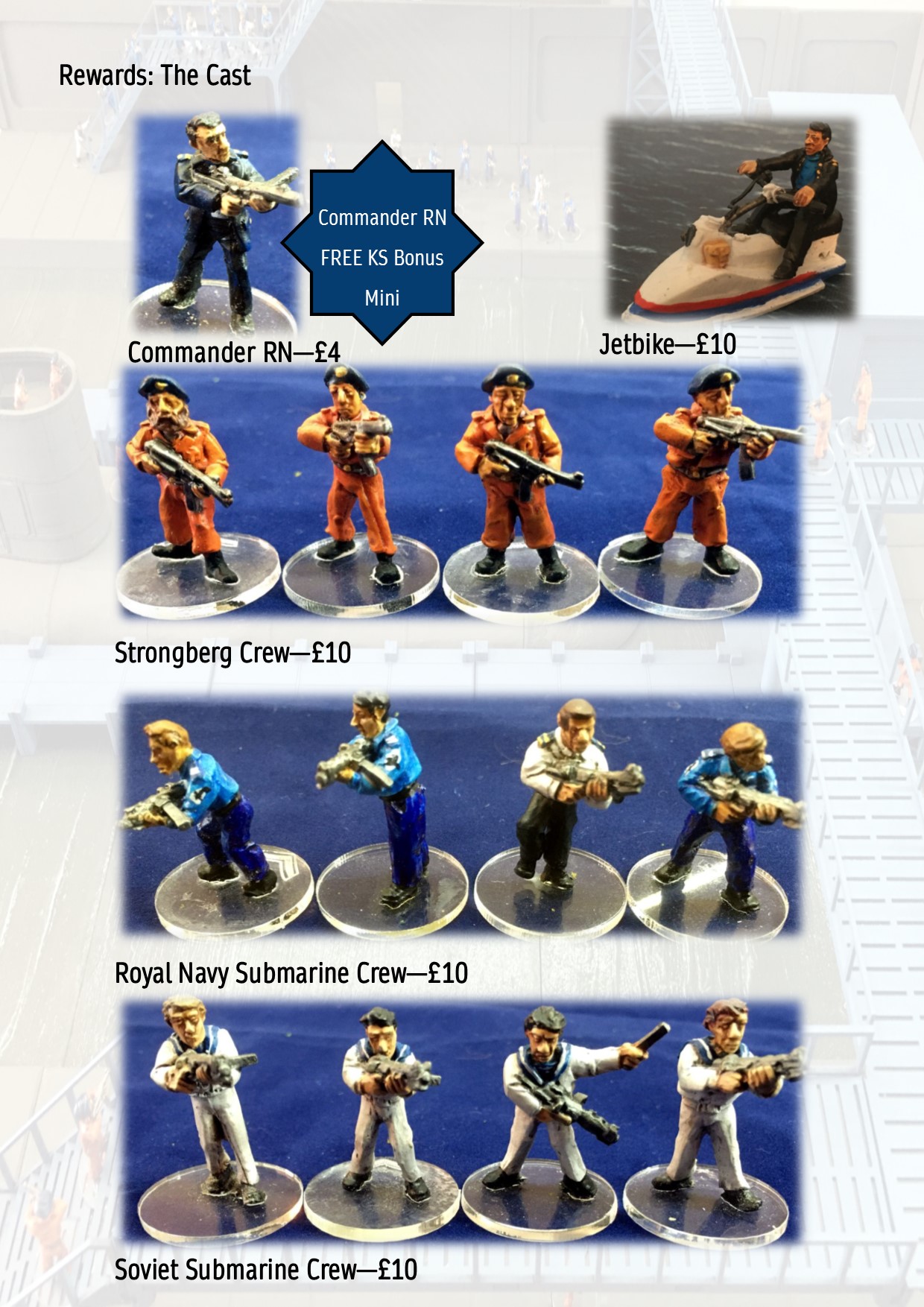 28mm modern News sally4th Sci-Fi
This entry was posted on Tuesday, October 12th, 2021 at 10:03 and is filed under News. You can follow any responses to this entry through the RSS 2.0 feed. You can skip to the end and leave a response. Pinging is currently not allowed.