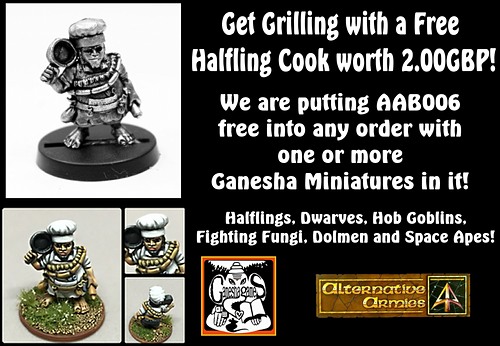 Following up on their recent successful Kickstarter campaign Ganesha Games through Alternative Armies is delighted to announce that the thirty seven 28mm fantasy miniatures of the Axe and Brimstone range are now released. Halflings, Possessed Dwarves, Fungus Men and Dolmen Rock Warriors plus two figures not in the original campaign (A Halfling Stiltfighter and a Possessed Dwarf on flying Hell Disc). There are three value packs with savings too. Good for any fantasy system and great new miniatures. Alternative Armies is putting a free AAB006 Halfling Cook, worth 2.00GBP into every order which has one or more Ganesha miniature in it until Monday. Excellent! Click through for more and all the pictures. Thanks. GBS

28mm alternative armies Fantasy News
This entry was posted on Friday, March 3rd, 2017 at 19:43 and is filed under News. You can follow any responses to this entry through the RSS 2.0 feed. You can leave a response, or trackback from your own site.