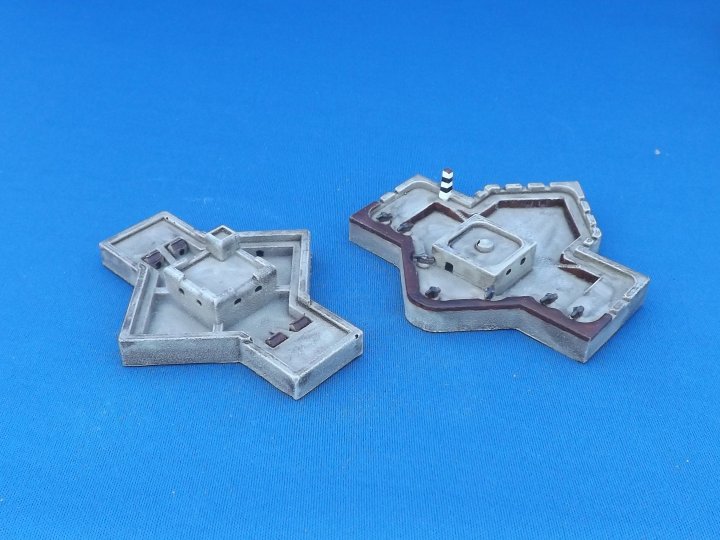 Portsmouth has always been one of the Royal Navy’s main bases, going back to the Tudors and Henry VIII. Henry built fortifications to guard the entrances to the Solent as part of his Device Forts programme, one of which was Southsea Castle. The first of our new models this week is of Southsea as first built in 1544. The castle was heavily modified over the years, including the repositioning of the whole North Wall 20-30 feet further north during the Napoleonic walls. The redesign was so extensive that we’ve made a completely different model of it after the work, dated around 1850.

During the Victorian Era, Lord Palmerston was responsible for a large number of coastal and inland forts built to counter a French invasion that, of course, never came. Four forts were built out to sea in the Solent itself – No Man’s Land and Horse Sands (which were pretty much identical), Spitbank and St Helen’s forts. We’ve modelled all of these as part of our Small Scale Scenery range, including a proposed turreted version of No Man’s Land/Horse Sands Fort with turrets that was never built but looks great !

The models are all modelled at 1/1000th so are ideal for 2mm scale figures, 1/1200th naval vessels or larger scale aircraft games.

As well as pre-Dreadnought era naval gaming, these models will also be perfect for Aeronef/Land Ironclads games and I’m sure we’ll see them appearing in Dystopian Wars games too, where our scenery range seems to be pretty popular.

2mm Brigade Models historical New Release
This entry was posted on Tuesday, May 12th, 2015 at 22:00 and is filed under News. You can follow any responses to this entry through the RSS 2.0 feed. You can skip to the end and leave a response. Pinging is currently not allowed.