Games For JOS16: Bridge At Remagen

This week's game is from the Deeside defenders who have pulled out a spectacular idea for our delectation and entertainment.   Over to Phil Broeders for the briefing... 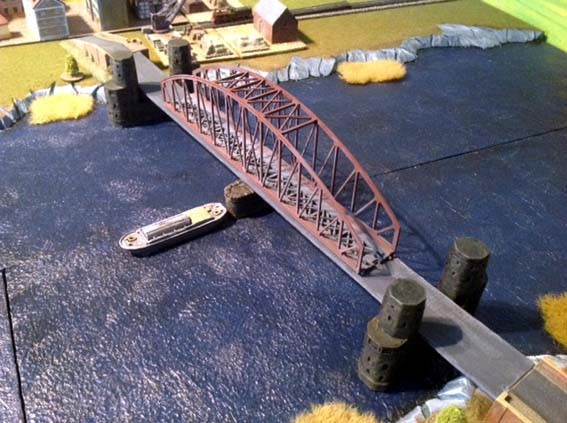 What’s it all about?

Where Hollywood and 6mm wargaming collides!  Deeside Defenders are re-enacting the 1969 film The Bridge at Remagen – a dramatisation of the capture of the Ludendorff Bridge over the Rhine in March 1945.

The film starred George Segal, Ben Gazzara and Robert Vaughn. The film, which was directed by John Guillermin, was shot on location in  Czechoslovakia and is based on the book The Bridge at Remagen: The Amazing Story of March 7, 1945 by writer Ken Hechler.

The film is a highly fictionalized version of actual events during the last months of World War II when the 9th Armoured Division approached Remagen and captured the intact Ludendorff Bridge. Instead of the real week-long battle and several artillery duels fought between the Americans and German defenders, the film (and our game) focuses on the heroism and human cost in gaining a bridgehead across the Rhine before the Allies' final advance into Germany. 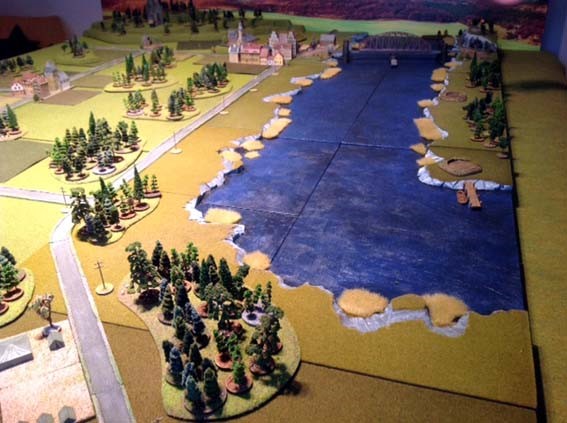 The American 9th Armoured  must capture the bridge intact.  Led by the Cavalry Recon team of Lt Hartman (Segal) and his side-kick Angelo (Gazzara),  the tanks and armoured infantry of the 9th must clear out all opposition in the town of Remagen and get their vehicles across the Rhine.

There are essentially 3 routes they can take.  Alongside the river is the fastest but also the most dangerous route because of German artillery.  Along the backroads is the longest route but they must capture farms and villages in the process (taking time).  Or they can cross-country which is slow BUT safer.

What’s the rush?  A Panzer Battalion of the 15th Army can arrive by train at any time to provide stiff opposition to the Chafees of the 9th Armoured.  Any delay in getting to the bridge could spell disaster!  The Americans MUST have units available close enough to take out the train before the panzers can be deployed.

The German defenders have a dilemma – blow the bridge and prevent the Americans from capturing it OR keep it open as long as possible to allow the German 15th Army to escape back to the German held side of the Rhine.  The longer they hold the Americans back from the bridge, the more chance of reinforcements coming to save the day.

The German players must get a result better than the film (where the Americans take the bridge intact and Kruger is shot for allowing them to do so).  Kruger is allowed to go to get reinforcements at a critical time of the battle but runs a high risk of being shot for neglecting his duty as a result.

The game ends when Kruger is shot, the bridge is blown or is captured. The points accumulated at this point are tallied up and the level of performance estimated (see below). 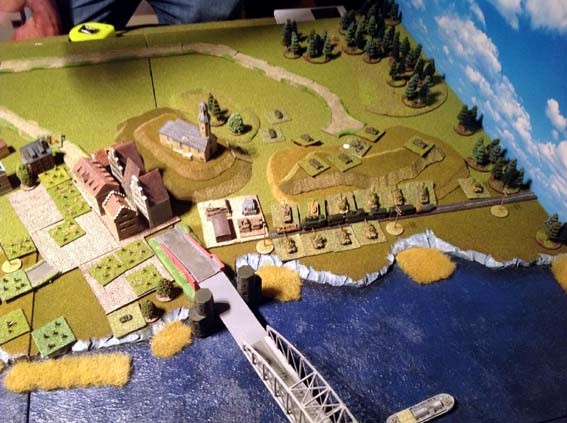 American Recon Team is Hartman, Angelo and their recon troops – the heroes in the film.

American commander is Major Barnes (Bradford Dillman in the film) – who orders Hartman to take the bridge intact – or die trying.

The German commander is Major Hans Kruger (Robert Vaughn in the film).  Ordered by Hitler to blow the bridge but asked by his own C in C to keep the bridge open as long as possible.  He is supported by Explosives Engineer Captain Baumann and Captain Schmidt form Remagen Bridge Security Command.

The bridge is ready to blow but using poor quality explosives.  On a 6 it will blow and leave a crater than only a US engineer base (armoured bulldozer) can fill in.  Each turn the Germans wait for high quality explosives to turn up and (if they do) need time to place and rewire. Then they try to finish the job before the Americans capture it.  If they lose the bulldozer, then there will be no tanks crossing the Rhine...

Only the German player can earn points and the more they earn, the closer to victory they get.

0-3 Kruger deserves to be shot,

6+ the Americans have faced the futility of war.

The Germans get a point for every one of Hartman’s unit that gets killed.

They get 1 point for each turn the bridge is kept open after the Panzer Battalion is detrained.

They get 1 point if the Americans commit their reserve.

What to look out for?

The German artillery alongside the river which shoot twice per turn. Ouch!

The 88mm above the bridge.  No American vehicle is safe.

The train with the Panzer Battalion turns up on the American side of the bridge.

Slimmed down Spearhead rules to speed up play as much as possible. 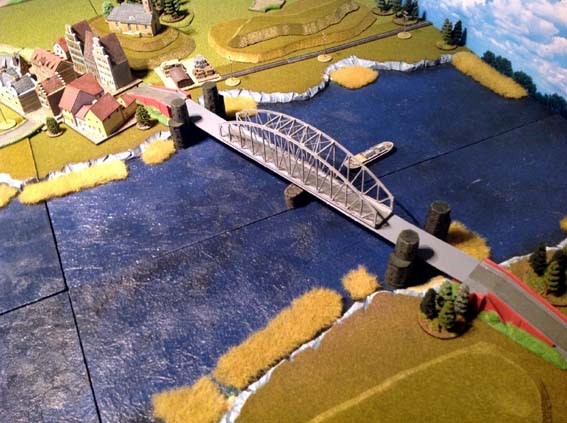 We playtested the rules and terrain last night.  The Americans sent their tanks down the riverside road and their armoured infantry down the back roads.  The tanks ran the gauntlet of German anti-tank fire and infantry fire from the trees lining the road.  The tanks managed to break into Remagen town but were decimated.  Hartman's team (leading the way) took a battering from infantry fire and mortars and were eventually wiped out as well.  The American armoured infantry fared better - swinging around the rear to assault the town and managing to polish off the remaining German defenders.  The Germans had already attempted to blow the bridge (leaving a smoking crater but a still-intact bridge) but found they didn't need to worry as the armoured bulldozer bringing up the rear of the tank battalion was lost to anti-tank fire from across the river.  The Americans could therefore still capture the bridge but not get armour across.  The German players decided to send Kruger for reinforcements (which resulted in him getting shot for desertion) for a sneaky win because having polished off Hartman's recon team the Germans secured a major victory.

Fancy having a go?  Then come along to the Joy of Six at Sheffield Hallam University on Sunday July 17th.    Like the look of the game, but 6mm not your thing?  The come along anyway and get in for FREE by claiming your '6mm Sceptic' badge. 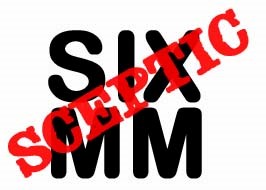 6mm baccus News shows
This entry was posted on Wednesday, July 6th, 2016 at 11:23 and is filed under News. You can follow any responses to this entry through the RSS 2.0 feed. You can skip to the end and leave a response. Pinging is currently not allowed.