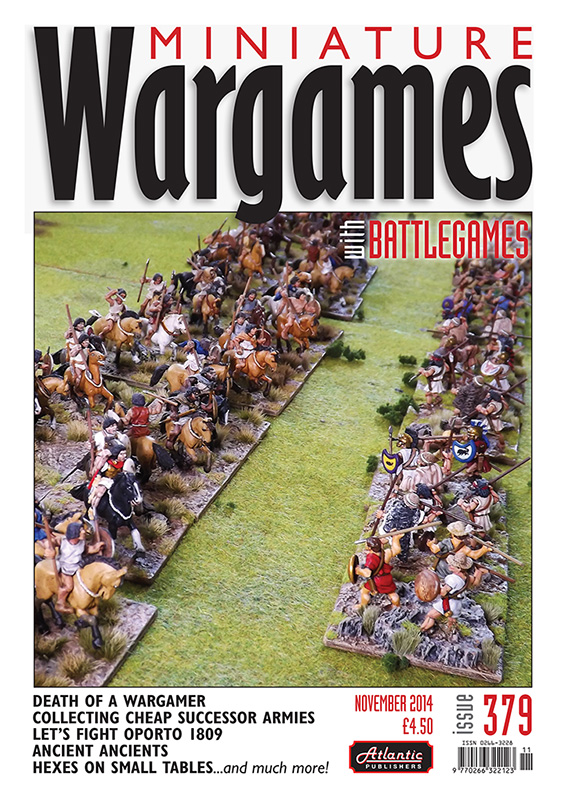 Due to be published this coming Friday, 24th October, issue 379 is stuffed full of wargaming goodness as usual, with a couple of thoughtful moments.

Briefing
It’s been an up and down month, with the loss of one of the hobby’s big online personalities, Allen Curtis, which brought much sadness; but the Editor’s faith is restored by an act of random kindness.

World Wide Wargaming
Another online stalwart Norm Smith chimes in with a suggestion for building simple websites, before the Editor highlights a couple more wargaming blogs and sheds more light on the intricacies of Twitter. You’ll see more of Norm later.

Forward observer
Neil Shuck is in pensive mood this month. Besides taking a trip to The Other Partizan, he’s been preparing for The Big Clearout, following some unsubtle prodding from his Editor!

Hot fun with a glue gun
Diane Sutherland demonstrates her versatility with that most vital piece of wargames terrain armament, the glue gun. Lock and load, boys, the lady’s taking you on an adhesive adventure.

Fantasy facts
John Treadaway oversees the latest batch of fantasy and science fiction offerings to cross his desk, reviewing both miniatures and scenery in a variety of scales. These include 28mm sci-fi miniatures from Pig Iron Productions, MDF scenery from Sally4th, resin miniatures of an unusual kind from Thunder Child Miniatures (including the magnificently-named brain Toad), more SF vehicular activity from Brigade Models and a host of 15mm sci-fi troops and vehicles from Darkest Star. All good stuff.

Death of a wargamer
The Editor mourns the loss of Allen Elmer Curtis, one of the online wargaming community’s best-known and sometimes controversial personalities, and ponders the implications of the digital ghosts we leave behind.

Ancient Ancients
Rob Young of Garrison Miniatures http://www.garrisonminiatures.com takes a fond look at the state of the market for ancients figures back in the days when Charles Grant and Phil barker held heated debates in the letters pages of wargames magazines. This, of course, may have been before some of you were born! Lots of old school eye candy on show.

Let’s fight Oporto 1809, part 1
Jonathan Jones undertakes the task of recreating the Second Battle of Oporto, 1809, beginning with decisions about the battlefield, the story behind the battle and constructing the elaborate tabletop for the game.

Wargames photography part 3
The Editor concludes his short series with an explanation of the subtle art of composition, rounding off with some technical notes about how to output your images for various media. Get ready for the rule of thirds!

Send three and fourpence
Conrad Kinch ponders the strength of a hobby that consists mostly of small manufacturers and publishers.

Wargaming, hexes and small tables
New contributor Norm Smith addresses a problem faced by many gamers, especially here in the UK or elsewhere in cities and towns with our comparatively small dwellings, and finds a polygonal solution.

Command challenge
Scenariomeister Steve Jones delivers another meisterwerk with “Variations on a theme of Teugn-Hausen”, presenting a single scenario that can be translated for three – or, indeed, more – periods, based on a historical encounter between France and her most intractable enemy.

Cheaper but still cheerful
Popular contributor Jim Webster follows up the long series he wrote for Miniature Wargames way back in 2009-12 about the squabbles following the death of Alexander the great – with great timing, given the popularity of the period on the show circuit these days.

Staying alive – a reply
Arthur Harman responds to Barry Hilton’s opinion piece that appeared last issue with his own, more optimistic thoughts about the future of the hobby.

Combat Stress Appeal
As we hurtle towards the £17,000 mark, the Editor delivers brings you up-to-date on the latest progress of our appeal, supporting a cause that has been much in the news and even in TV drama “Our Girl” recently.

Hex encounter
Brad Harmer asks “War, huh? Yeah, what is it good for?” as he plunges into the atmospheric world of soundtracks for wargames.

All rounded off with messages from your favourite advertisers and the Classified section too.

That’s it for now. Issue 380 is already underway, and you can visit the website at http://miniaturewargames.co.uk for extra stuff in the “Goodies” section!

henry hyde miniature wargames New Release
This entry was posted on Wednesday, October 22nd, 2014 at 20:51 and is filed under News. You can follow any responses to this entry through the RSS 2.0 feed. You can skip to the end and leave a response. Pinging is currently not allowed.