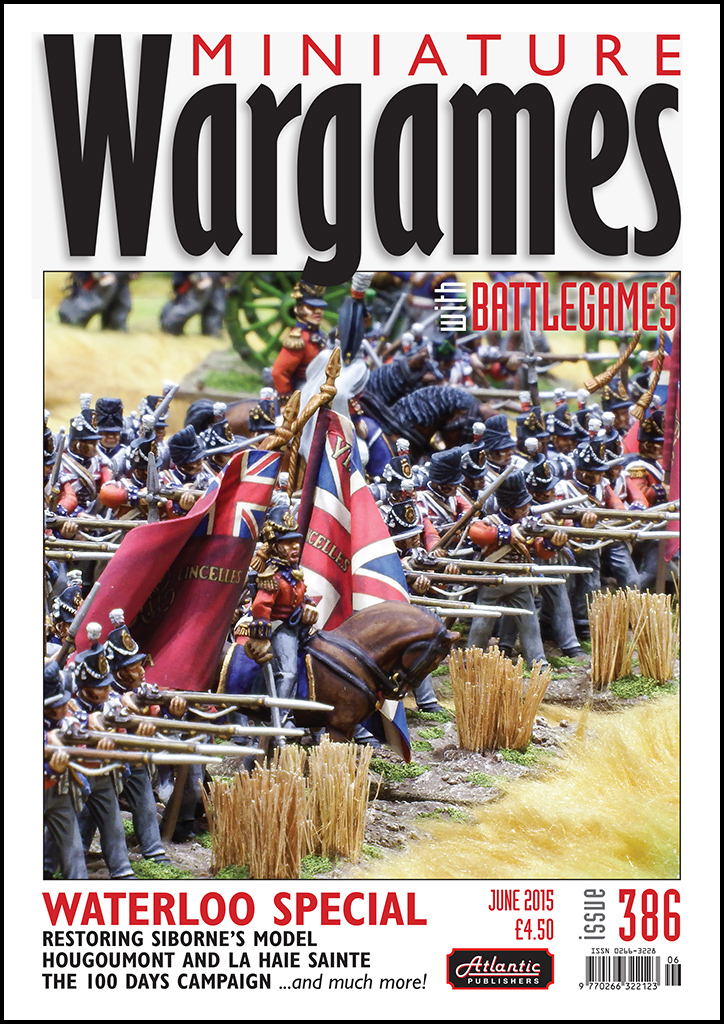 With the 200th anniversary nearly upon us (18th June 1815), it occurred to me that this would be the one and only opportunity for us to commemorate this epic event in European military history, so this issue contains several articles marking this momentous occasion.

Military historian John Franklin describes the desperate fighting around the two key positions on the battlefield of Waterloo in Hougoumont and La Haie Sainte.

Well-known wargamer Steve Jones has done us proud with Napoleon’s final gamble, the ultimate campaign for the Napoleonics fan: the 100 Days as the Emperor, having escaped from Elba, attempts yet again to overturn the old order and rebuild his empire by might of arms.

Cardboard terrain enthusiast Jeff Brown has created PDF models of La Haie Sainte and Hougoumont for use with any size of miniature – they’re in the magazine, but you will also be able to download the PDFs from our site and resize them to whatever scale is required! (Available from Friday 22nd May.)

In Siborne’s greatest victory, none other than Siona Mackelworth and Cymbeline Storey of the Royal Armouries in Leeds have sent us a magnificent piece describing and showing the recent restoration work on Captain Siborne’s amazing model of Waterloo made in the early 19th century. They are also running a wargaming event on 13th and 14th June.

Of course, we have lots of other stuff too!

Neil Shuck with his regular Forward Observer report from the wargaming front lines, ranging from Waterloo to Afghanistan.

In Shocking tufts! Diane Sutherland regales us with a tale of tufts, tantalisingly teased out of flock and glue. One of her more ‘industrial’ projects, don’t be surprised if we see a miniaturised lawn mower as her next project to keep her manufactured savannah in check.

In Fantasy Facts, John Treadaway staggers back from Stingray at Salute to cast his eyes over some Pulp rules, a handful of 1/100 scale SF vehicles and figures, a few 1/300 SF vehicles and buildings, a bevy of space ships and a positively urban sprawl of MDF buildings in whatever scale 10mm is...

In the final part of The March on Madrid, Andrew Rolph concludes his series on gaming the Nationalist advance north with detailed commentary on the rules that appeared in issue 385, along with some suggestions for transposing the campaign to other periods.

In Tchaikovsky meets Morschauser, Arthur Harman presents the battle in The Nutcracker between the Toy Soldiers and the Kitchen Mice, inspired by the works of ETA Hoffman, Bob Cordery and late, great American wargamer Joseph Morschauser.

For scenario fans, Citadel Heights refought has Charlie M Grant taking on his father, Charles S Grant, to rekindle memories of a game first described by their forefather, the other Charles Grant, more than fifty years ago. Great scenarios never grow old!

In Hex encounter, Brad Harmer is muttering something about “Dungeon crawling, to the far away towns, now war is declared and battle come down...” Great stuff here with boardgame alternatives to the classic D&D.

Send three and fourpence sees Conrad Kinch doing something completely different this month, providing us with a scenario for the popular Commands & Colors Napoleonics – “Blasthof Bridge” from Charge!

Recce is stuffed to the gunnels with reviews from our team of experts, covering lots of books, rulesets and boardgames this month, as well as some paints. Again, I’ll be posting extra reviews on our website in the coming days.

We have a competition with three sets of the John Franklin Waterloo campaign series up for grabs thanks to Osprey Publishing.

And of course our Battlegames Combat Stress Appeal page carries some spectacular news this month!

That should keep you busy while you contemplate what to do for the Battle of Waterloo 200th anniversary commemorations. Perhaps I’ll see you in Leeds at the Royal Armouries?

henry hyde miniature wargames New Release News
This entry was posted on Wednesday, May 20th, 2015 at 20:05 and is filed under News. You can follow any responses to this entry through the RSS 2.0 feed. You can skip to the end and leave a response. Pinging is currently not allowed.