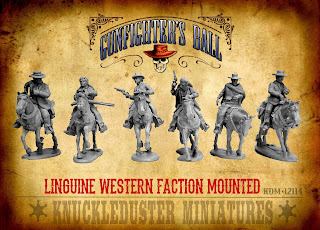 If you'd like your Spaghetti Western characters to ride menacingly into town or triumphantly out of town, they're going to need to be mounted! The Mounted Linguine Western Faction pack includes all six characters from the Linguine Western faction in mounted form. It even includes one notorious Bounty Hunter on a mule.

The second release is a character called "Banjetta." This one is designed for painters and role-playing gamers who would like a slightly fantasy, slightly steampunk western-themed bard. She's sculpted in a style reminiscent of the days when RPG figures carried anachronistic electric guitars, but her instrument of choice is a double-necked banjo. The figure sports extremely fine tooling on her leather outfit and raised Celtic-knot detail on the back of the banjo. 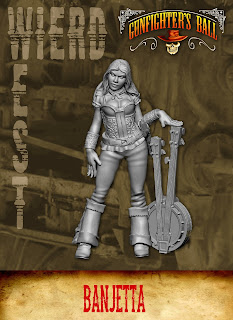 Banjetta is only available from retailers and will not show up in the Knuckleduster shopping cart until the next retailer-exclusive comes along later this year, so please visit one of our stockists or ask your local store to carry Gunfighter's Ball! 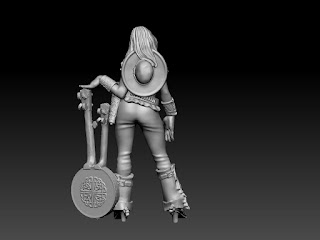 Next month's release will include Native Americans and more gunfighters.

28mm Knuckleduster Miniatures News western
This entry was posted on Friday, January 10th, 2020 at 16:56 and is filed under News. You can follow any responses to this entry through the RSS 2.0 feed. You can skip to the end and leave a response. Pinging is currently not allowed.