Zortan Yorditt surveyed the village below. “Poor, dumb bastards” he thought to himself as he lowered his scanner glasses and turned to see his team install the last of the terraforming beacons in the ground. These one-eyed Neanderthals don’t know that in a day their village and everything around it will be converted to a primordial soup and then reconstituted as this inhospitable rock they call home is converted into a farming planet for the Empire.

Many of the more hot-headed friends of his youth had rushed to join the Galactic Scouts or Terran Mobile Infantry. They were mostly dead now, scattered over a dozen battlefields throughout known space. No, the life of a terra-Engineer was the life for him…safely reengineering some primitive rock cleared as harmless by Imperial Intelligence with no personal risk and in a day he’d be back in his cushy cabin on his safe, comfortable ship. If he had to zap a few primitives to preserve his own skin so be it. They’d never even know what hit’em.

"Yes" thought Sergeant Yorditt as he again picked up his scanner glasses and mentally patted himself on the back, "you were one step ahead at every turn."  "Hmmm? That's odd. How did that Cyclops get his hands on a pulse rifle? Wait a minute, they all seem to have pulse rifles..."

RavenClaw miniatures is pleased to release the beginning of a huge and fantastic new sci-fi range “The Blixx!” RavenClaw is available exclusively from Badger Games and there is much more to follow… 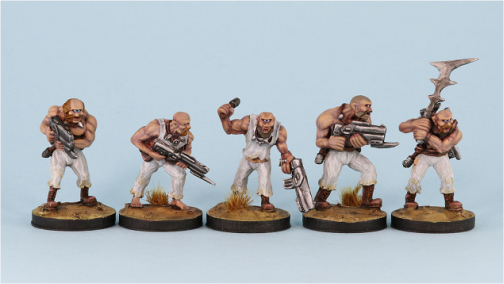 28mm badger games New Release Sci-Fi
This entry was posted on Friday, July 20th, 2018 at 09:58 and is filed under News. You can follow any responses to this entry through the RSS 2.0 feed. You can skip to the end and leave a response. Pinging is currently not allowed.