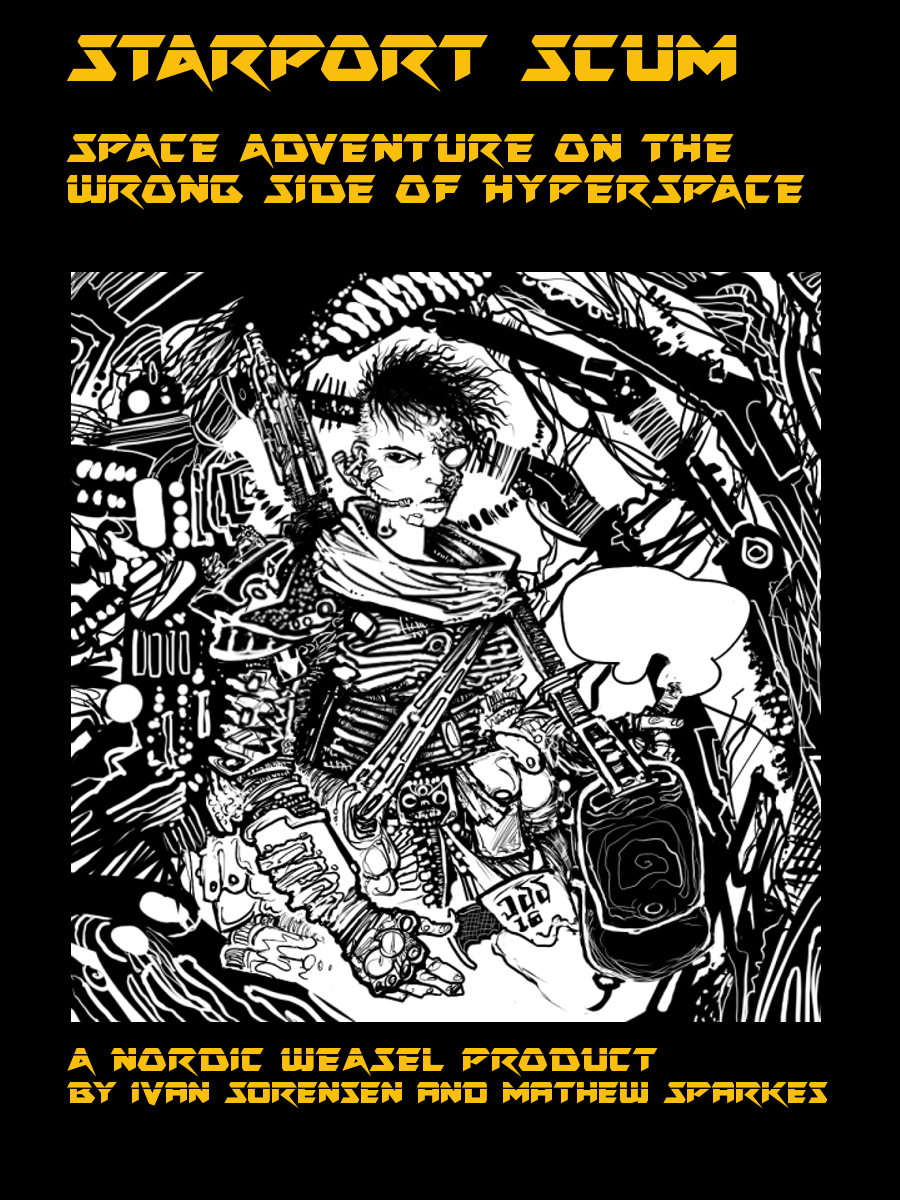 Starport Scum is a tabletop game of fierce space adventure, space pirates and salvage crews looking for the next big break.

Drawing on sources such as Traveller, Firefly, Trigun and Borderlands, it's a game about getting by on the outskirts of civilization, always on the look out for that next job.

Combining miniatures war gaming with role playing game touches, Starport Scum is playable as a conventional miniatures game, a narrative RPG or a hybrid beast combining the best of both worlds.

While the rules cover a variety of situations, the basics can be condensed down to one page and revolve around gathering up a base number of dice (based on character class), adding bonus dice for suitable traits and weapon tags.

For example, an Ace-class character gets 2 dice to shoot, but if she's a QUICK THINKER, she might get a bonus die when its a surprise encounter.

The only need for book keeping or markers during a game is for figures that are pinned down and wounded hero figures. Thus, you can avoid the table being cluttered up by status effects.

Character design can be as simple as scribbling down a few descriptive words for each character or traits can be built using the "build engine" included.

You also get a random character creation process that helps set up your heroes with a bit of context in the world.

Guns and gadgetry likewise can be invented on the fly or built using a "lego-style" system of combining tags and conditions.

To help you run the game, we include rules for handling common situations, again modifiable to almost any outcome and a full set of campaign rules covering how your figures can gain experience, take a variety of jobs and find interesting loot.

Tables are provided to roll up a random gang of bad guys, as well as a few alien horrors to get eaten by.

Rounding out the package is a collection of random tables to help spur the imagination, aid solo gamers and generally spice things up for those times when the party has touched down on a planet and you're not sure what's out there.

Starport Scum is formatted to be screen friendly and print friendly.

The game is intended to be played with miniature figures of any scale, with a typical game featuring 4-10 figures on each side.

Provisions and suggestions are included to play without miniatures for those wishing for a more freeform experience.

No canned background is included though the creation tables will suggest the nature of the universe. Adapt your own setting or fit the rules into an existing world.

Some Q&A can be found here.

If you want to read an After Action Report from a game, go here.

New Release Nordic Weasel Games rules Sci-Fi
This entry was posted on Tuesday, July 19th, 2016 at 21:05 and is filed under News. You can follow any responses to this entry through the RSS 2.0 feed. You can skip to the end and leave a response. Pinging is currently not allowed.

One thought on “Starport Scum Is HERE!”