I recently made some wreck markers for a game of Imperial Skies; they don’t serve any game purpose, but they look good. 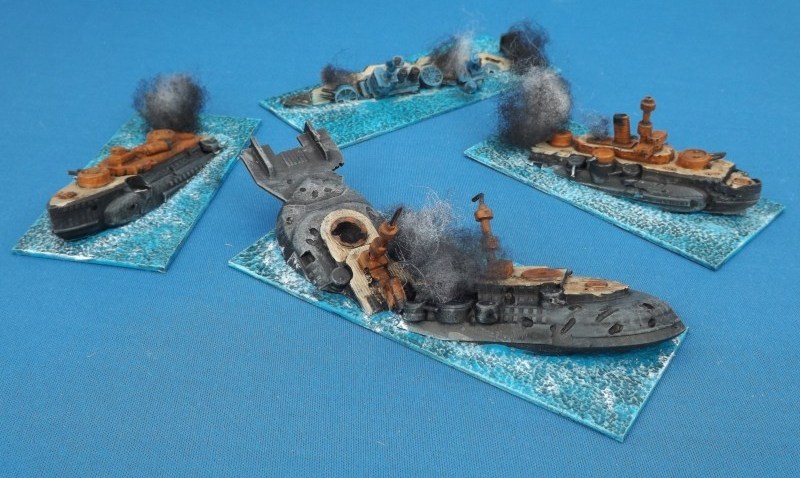 I was fielding a small but powerful French fleet, so I modelled my two capital ships (a Gaulois dreadnought and a Massena battleship), and while I was at it I added a Loire and one of the new la Verde class Italian battlecruisers.

The resin hulls were cut off at odd angles and the Gaulois was cut completely in half. They were then severely distressed with knives, clippers, files and a Dremel fitted with a grinding head. Some of the turret mountings were drilled out and gun barrels removed. The metal turrets, funnels and other bits were similarly attacked, gun barrels and masts bent before sticking them to the hulls.

They were based on textured plastic Land Ironclads bases, and the Massena’s tail was cut off and stuck at an odd angle.

Everything was sprayed black before they were given the roughest of rough paint jobs – just two additional colours, deck and superstructure. I didn’t bother painting details such as windows that I’d normally spend time over. I gave them a similarly quick drybrush rather than the usual edge highlighting, then lots of dark washes hid the rough edges.

The bases were painted in sea colours and a wash of GW Coelian Greenshade gave a suitably oily-looking surface to the water. The final touch was some fibre stuffing which was lightly sprayed black then superglued to represent smoke billowing out of various orifices.

Although they were just for aesthetic purposes in our game, they could be useful as objective markers in a game – retrieving vital papers or a VIP from a downed ship.

This week we’re updating all of the cruiser classes in our French Aeronef fleet. This includes the cruisers Jeanne la Pucelle and Formidabile, and the commerce raider classes L’Epee and Fléche. Whenever we release one of these updates we always try to add something new as well as replacing the older models; the British got the Minotaur Armoured Cruiser earlier this year and the Germans the Lützow Fleet Cruiser and Hansa Torpedo Cruiser. The French are no exception – they get the brand new 6-turret Jules Ferry Armoured Cruiser class.

We’ve followed the layout of the older models for the designs but in detail they’ve all changed considerably (for the better !). All of the models feature one-piece metal hulls and separate turrets. Our existing French fleet packs will have the new designs instead of the old ones.

During the Crimean War, the French used a number of Floating Batteries – ironclad hulls with a complement of heavy guns, but no means of propulsion. They were towed into position by smaller vessels – mostly paddle-steamer frigates – and used to bombard Russian coastal forts with some success. They were also deployed to the Adriatic during the 1859 Franco-Austrian War.

They struck me as a great idea for some new Aeronef vessels. Using the same idea of battleship-sized but unpowered vessels with lots of guns, this time flying rather than floating, I’ve come up with two different variants.

The first model is the Redoutable, the early version of the flying battery idea. This has 18 heavy guns in open mounts on the deck and a small deckhouse for the gun crews to shelter in.

The second model is what I imagine to be an updated version of the design – maybe a few years later, the original vessels were upgraded. These vessels, known as the Solférino class, retain ten of their original gun mounts but with the end ones replaced by two heavy battleship turrets and, in recognition of the increasing threat posed by fixed-wing aircraft, two turrets each mounting three rapid-firing small calibre AA guns. The vessels also have a small steam-powered engine to provide power to operate the heavy gun turrets, and a mast with spotters to provide centralised fire control.

Our Aeronef update programme continues today with the release of five new German cruisers. Three replace the existing models, while the Hansa and Lützow are new designs.

The Köln is one of the oldest German models in the range and both it and the Emden had small cast-on turrets. The new versions have separate turrets and much more detail. The Prinz Heinrich model has a twin heavy turret up front along with a smaller one aft.

The Hansa is a variant of the Emden hull, but with two larger turrets in place of the latter’s battery of small turrets, plus torpedo tubes along the flanks.

The Lützow is a heavy Flottenkrüzer with five larger turrets.

Our final release for this week is another pair of Aeronef, the Spanish Príncipe de Asturias class carrier and Halcón class fighter. The carrier is a multi-part resin and metal kit, while the fighters come in packs of six. There is also a new Spanish carrier packs with a carrier, fifteen Halcón and six escort vessels. 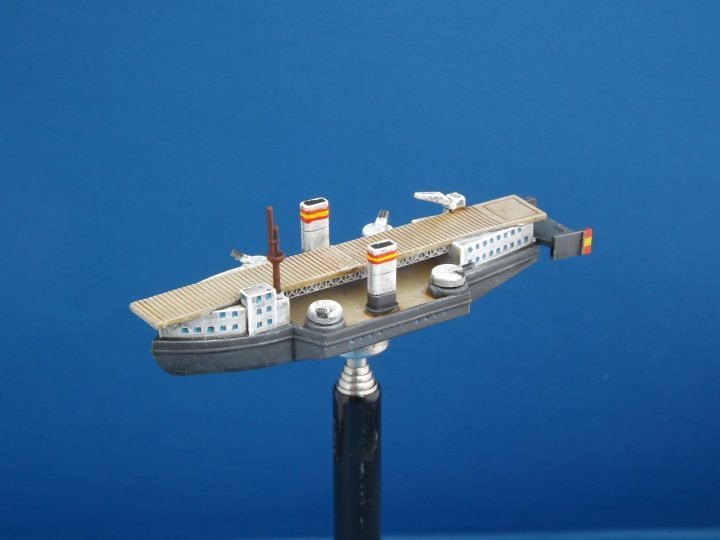 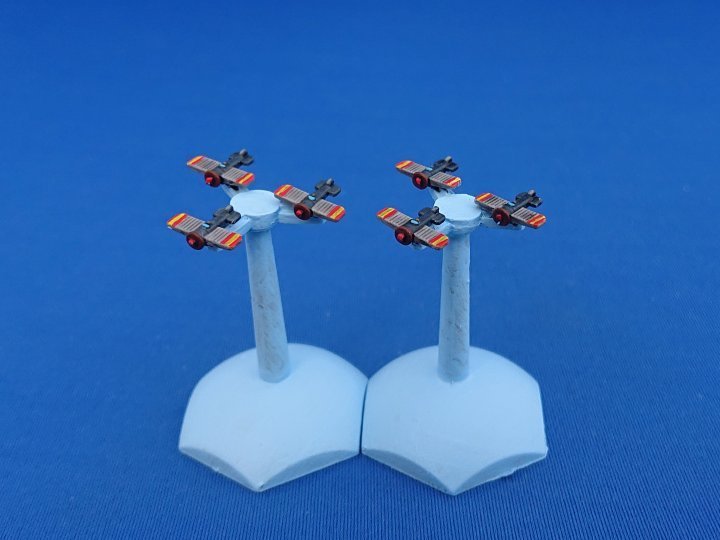