With the dust settling on the first part of this report, it is now time to dive back into the depths of Sheffield Hallam’s stunning Heartspace atrium and have a look at the other games on display.

We’ll kick off with a belter of a game.  Dan Hodgson has been responsible for some of the most spectacular games on offer at previous JOS shows, and this year he produced a classic.    His version of Waterloo gained envious looks all day featuring beautiful terrain and thousands of lovely figures. 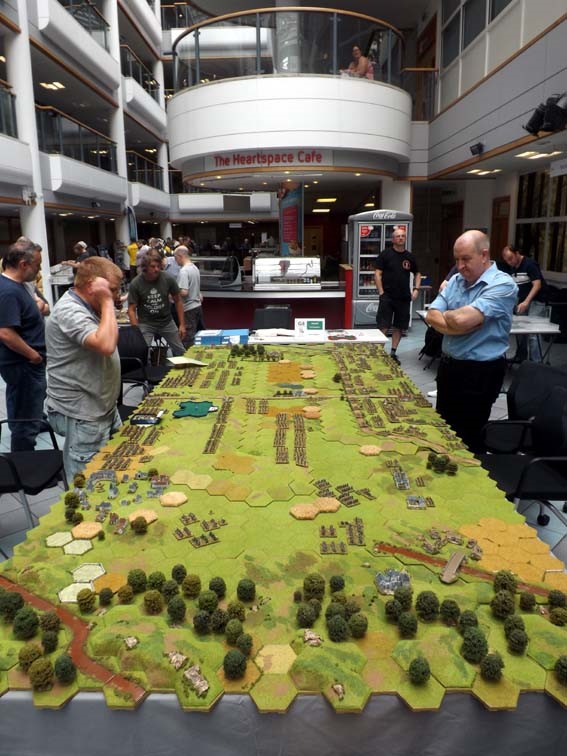 For those attendees wondering how they could ever match the standards of the painted figures on offer, Dr Mike had is world famous Painting Clinic open for business.    He dealt with newcomers wanting to know where to start and experience painters looking for tips with equal respect and without breaking a sweat.   Mike was one of the busiest people at the show and that really is saying quite a lot. 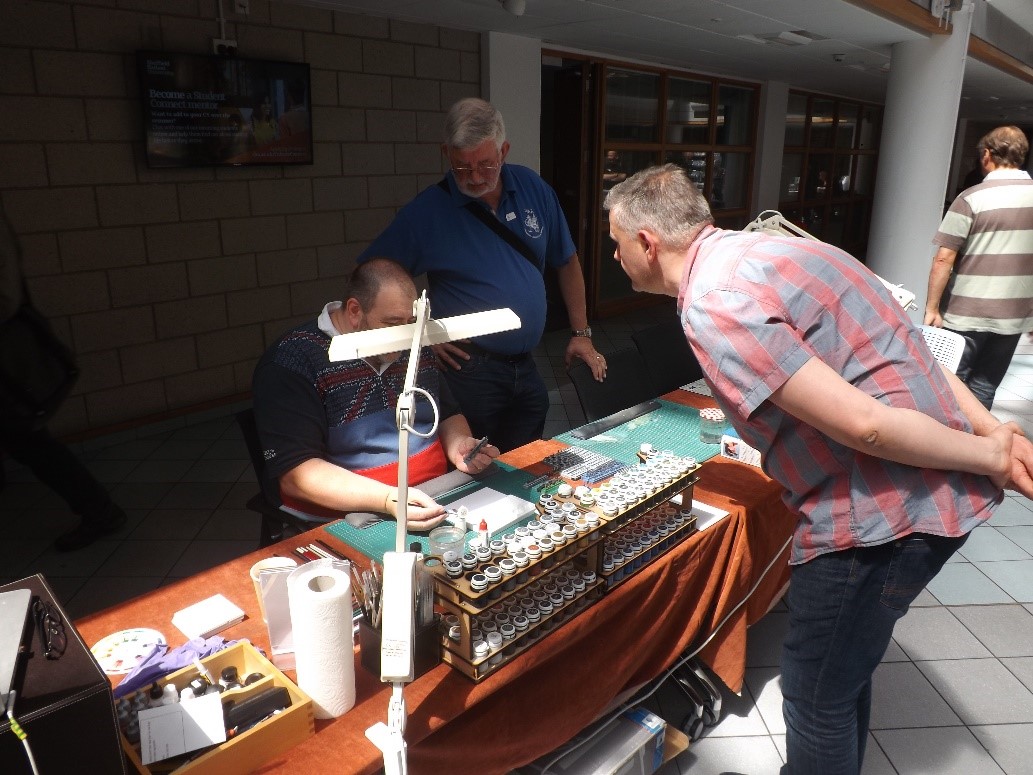 Moving out of the main hall, the second side room contained a VERY large scale WW2 game from Wakefield and District games.    Yet another fusion of boardgame and figures this was a simple concept executed beautifully. 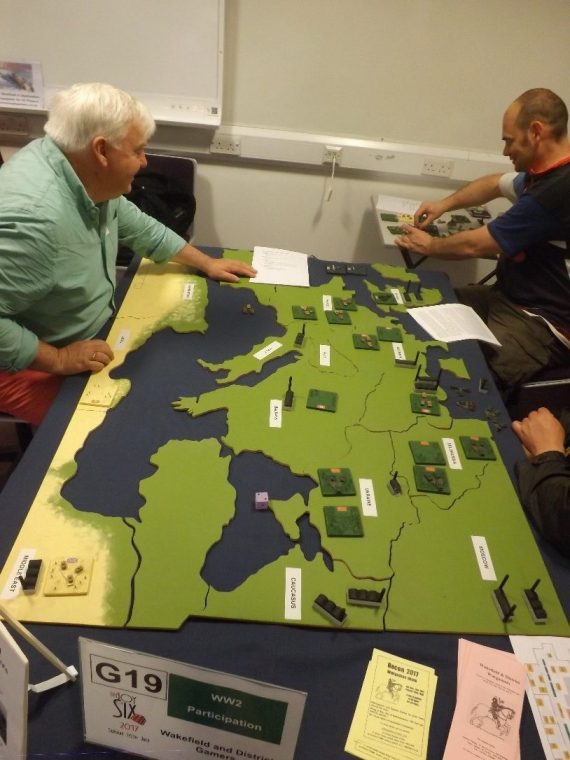 Next to them, SeaBee games ran their WW2 game which was at the opposite end of the spectrum.  Operation Bagration was a lovely little tactical game focusing the action on a 2 foot square board.   What other scale could offer such flexibility? 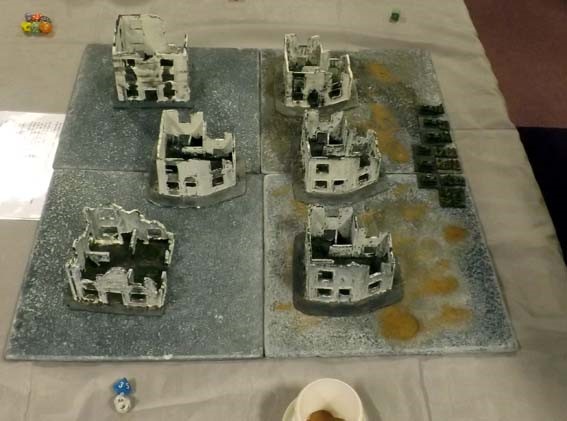 By way of contrast to both WW2 games, the Bradford Battletech Battalion stated, unsurprisingly, a large Battletech game.   Lovely innovative terrain and a very polished presentation ensured a lot of interest for this group making their JOS debut. 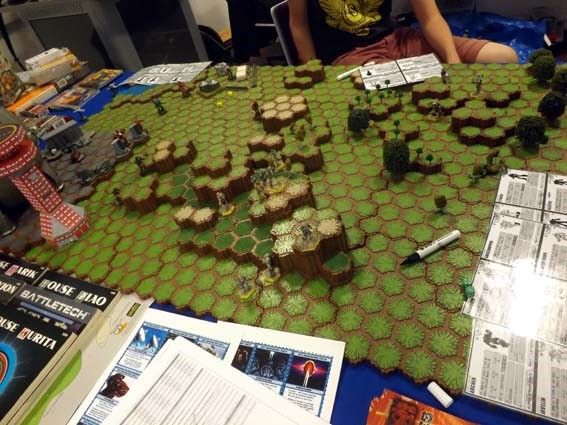 Moving on to the next side room, Luton Lancers presented their lovely Napoleonic game of Katzbach 1813.  By contrast to the Waterloo game, this was a much more stripped back affair, but chose an scale of operation that let you step back and get an idea of the action very quickly and easily. 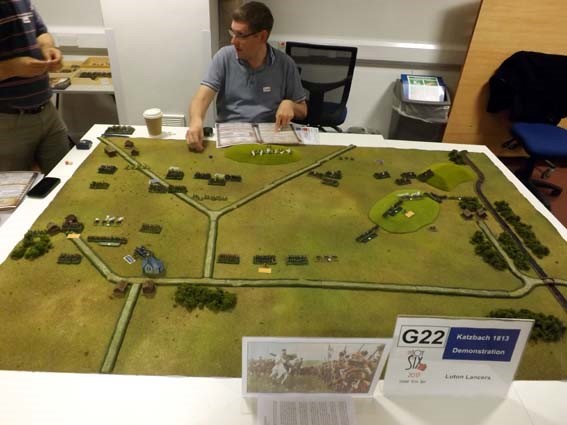 Moving around the room, you came across RAF Cranwell’s game – the second of the day to feature giant stompy mechs and give you the opportunity to go around making missile and laser beam noises. 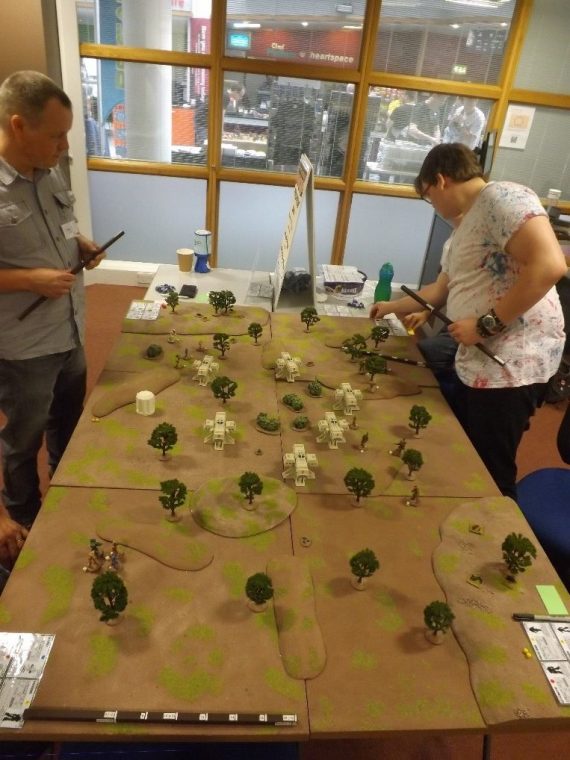 Moving to a completely different time-line, JOS regulars, MAD gamers presented the second GNW game of the show with their ‘Eastern Front 1700’ game.   This crowd is one of the most outgoing an energetic group you can meet at any show.  As a result, despite their best intentions, they spend most of their time talking to onlookers rather than moving their troops. 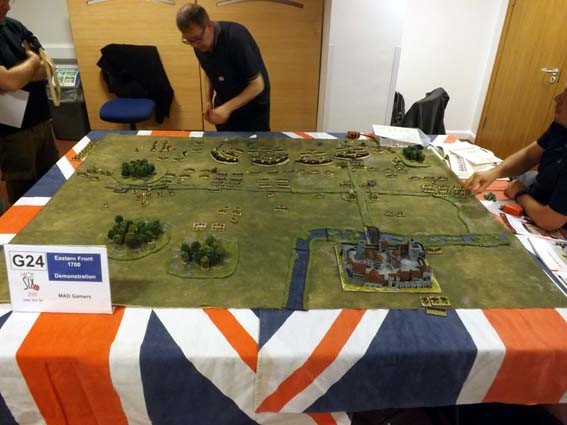 Sheffield Wargames Society presented their fascinating game, ‘A Platoon Commanders War’.   Based on a pre-war infantry field manual, this presented the players with some real life tactical problems and let them get on with it.    Needless to say, players found that their was more to this than met the eye… 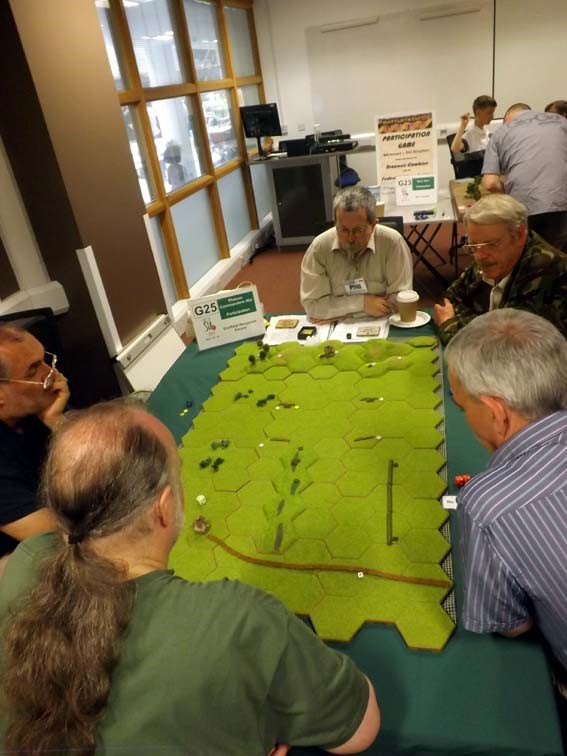 Emerging from the side rooms the visitor next stumbled on Wargames Emporium’s popular Command Horizon game featuring their own range of 6mm vehicles.   Nicely presented and visually attractive this was busy all day. 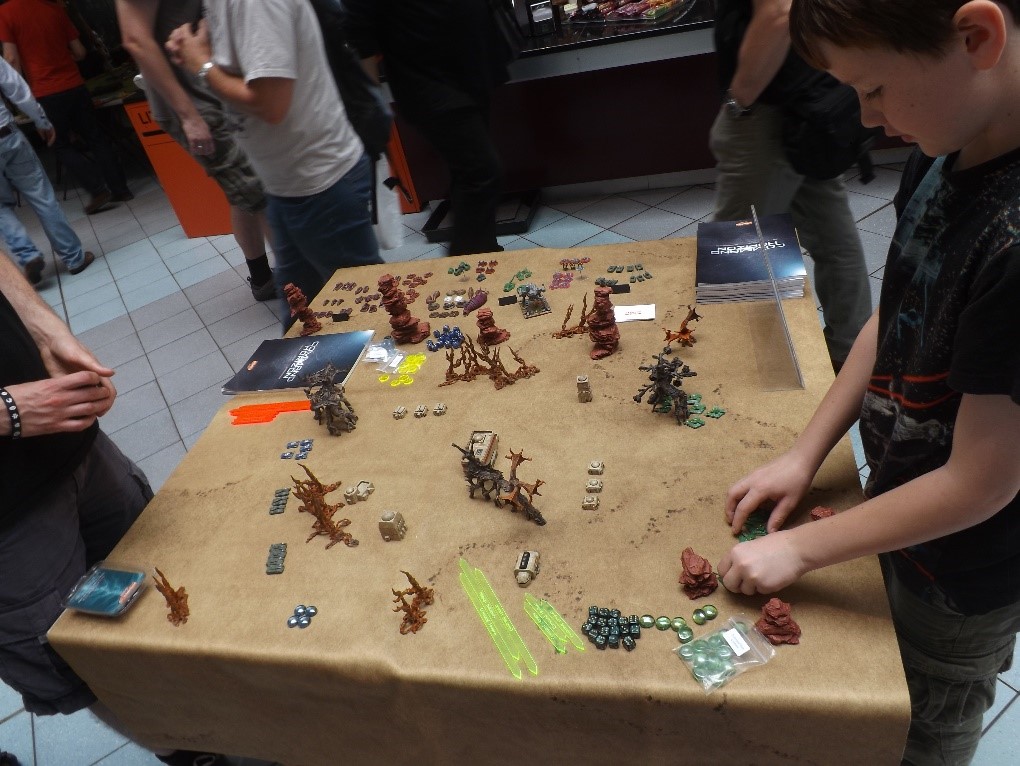 And as usual with the JOS the next game to them was a huge contrast.  The Mailed Fist presented a lovely game.   Last Train to Berlin featured a brilliant table layout with highly detailed the thoroughly convincing scenic.  Not as big as the ‘show stoppers’ but all in all a table of the highest quality. Science fiction gaming had a strong presence at this year’s JOS and the next game continued that trend.  Newcomers to the show Britannicus games’  ‘Horizon Wars’ featured yet another variation on the Mech genre with beautifully modelled fighting machines and some very nice large (for 6mm) terrain and scenic pieces. 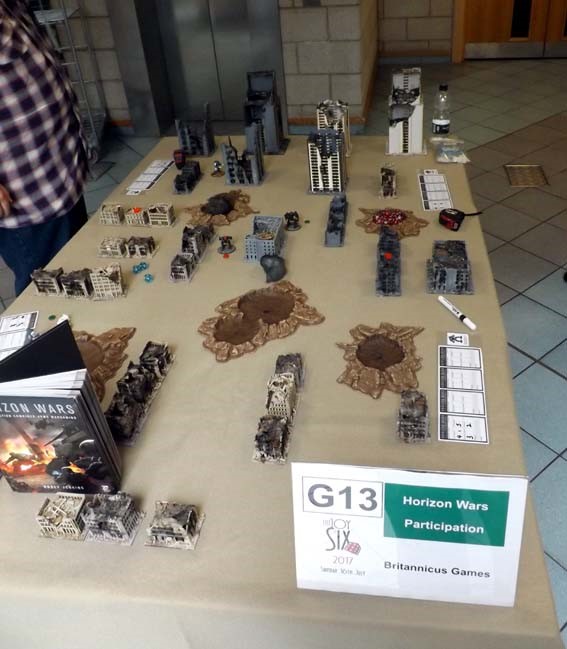 The final game on offer was one of the largest as South London Warlords made the trip up the M1 to present their Neustadt Crossing 1985 game.    When you have a strong scenario, functional and attractive scenic and bucket loads of Soviet tanks, how can you go wrong?    Note the river sections which were actually slung between the tables to achieve the effect of it being lower its banks and the rest of the table surface.   Great idea!

And there you have it for the games.  Visitors to the show were able to attend two seminars staged by Wargames Emporium and Baccus.   The food on offer was both cheap and good quality and for those who needed it, there was plenty of comfy seating.     There was a very healthy showing from the 6mm traders with stands from Commission figurines, Leven, Heroics and Ros, Rapier, Timecast, Brigade, GSM Scenics, Britannicus, Wargames Emporium and Baccus.

Those attending all remarked on the unique atmosphere of the JOS.   There was a buzz unique to the event with everyone seeming to walk around with a smile on their face.   The word that was repeated to me me time and time again from visitors, traders and gamers was, ‘Friendly’.   Yes, this was indeed a very friendly show and a very enjoyable one.    Most one day shows in the UK are dying by 2pm.   The JOS bucks this trend as visitors stay on until the bitter end and have to be thrown out at closing time.

We all see this as our opportunity to show the rest of the wargaming world just what 6mm gaming has to offer.  To this end, we offer free entrance to any non-6mm gamers who turn up.  Sadly our invitation didn’t get many takers this year.   I hope that some of our reading this may just be tempted to come along to the JOS 2018.   I don’t think you’d be disappointed.

From the organisers of JOS, thanks to all who came in whatever capacity.   The show works because a lot of people put a lot of work in for the love of the hobby and it shows.

The Friendly Show will be back in 2018.  Make sure that you are there!

6mm baccus News shows
This entry was posted on Wednesday, August 2nd, 2017 at 11:12 and is filed under News. You can follow any responses to this entry through the RSS 2.0 feed. You can skip to the end and leave a response. Pinging is currently not allowed.