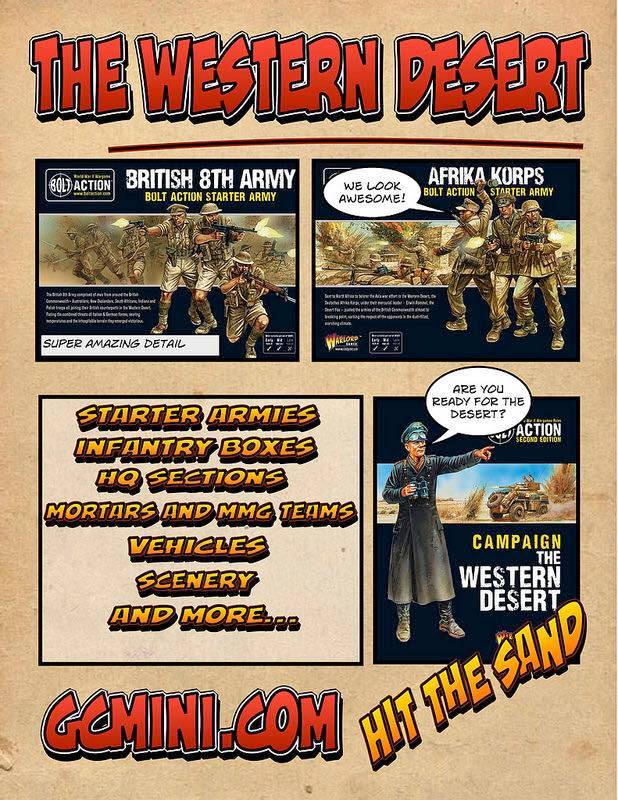 This is an exciting weekend if you are a 28mm WWII wargamer, especially if you play Bolt Action.

Warlord Games is releasing a whole line of new products around the Western Desert theater.

The first item in this new series is the Western Desert Campaign book, this is a 136 page book that focuses on the conflict in the area most commonly referred to as the Western Desert - a campaign theater reaching from the Libyan city of Tripoli to Cairo, and the Egyptian Nile valley, a distance of some 1300 miles, a featuring some of the most hostile terrains on Earth.

Next there are Starter Armies for both the British 8th Army and the German Desert Africa Corps. Both of these starter armies contain about 40 men and a vehicle (two in the case of the 8th Army), and three artillery pieces for each side including the dreaded Flak 88 for the Germans.

There are also individual infantry boxes for both armies that contain 30 dudes each.

In addition to these armies and infantry boxes there are blister packs containing HQ units, Medium Machine Gun teams, and Medium Mortar teams.

There are also several new vehicles being released for the series.
All of these items will be in the GCmini.com online store starting this weekend. We will have the entire new line in stock in good quantities.

These eight new models and the three model starter set are available now and be purchased at the GCmini.com online store.

28mm gamecraft miniatures News WWII
This entry was posted on Friday, September 7th, 2018 at 10:11 and is filed under News. You can follow any responses to this entry through the RSS 2.0 feed. You can skip to the end and leave a response. Pinging is currently not allowed.

One thought on “Western Desert Miniatures”