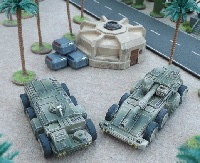 This week’s new release is another pair of remastered models in our 15mm SF range – more correctly it’s one remaster and one completely new model. They’re also the first wheeled vehicles in the new range, which means that we now have hover, grav, tracked and wheeled to choose from.

The South African Confederation Rhino tank and Wildebeest heavy APC are large, six-wheeled vehicles. The Rhino carries an 11cm railgun and a secondary autocannon in a two-man turret, with advanced sensors in the left-hand side. Two further crewmembers, the driver and EW specialist (who also has a secondary set of driving controls), sit forward of the turret but protected by the bulk of the engine.

The Wildebeest has a two-man crew, driver and commander. The commander also controls the forward turret which is fitted with either a twin MG or an Umuvi light anti-tank missile system. The roomy troop compartment can accommodate up to twelve fully armed infantry, although squads are usually smaller and the extra space is used for supplies and additional ammunition. The basic APC model also has a roof hatch with a manually-controlled pintle weapon that can be manned by one of the passengers.

15mm Brigade Models New Release Sci-Fi
This entry was posted on Sunday, July 27th, 2014 at 17:37 and is filed under News. You can follow any responses to this entry through the RSS 2.0 feed. You can skip to the end and leave a response. Pinging is currently not allowed.

One thought on “Wheels of Steel”