FiveCore 2nd Edition Is A Reality 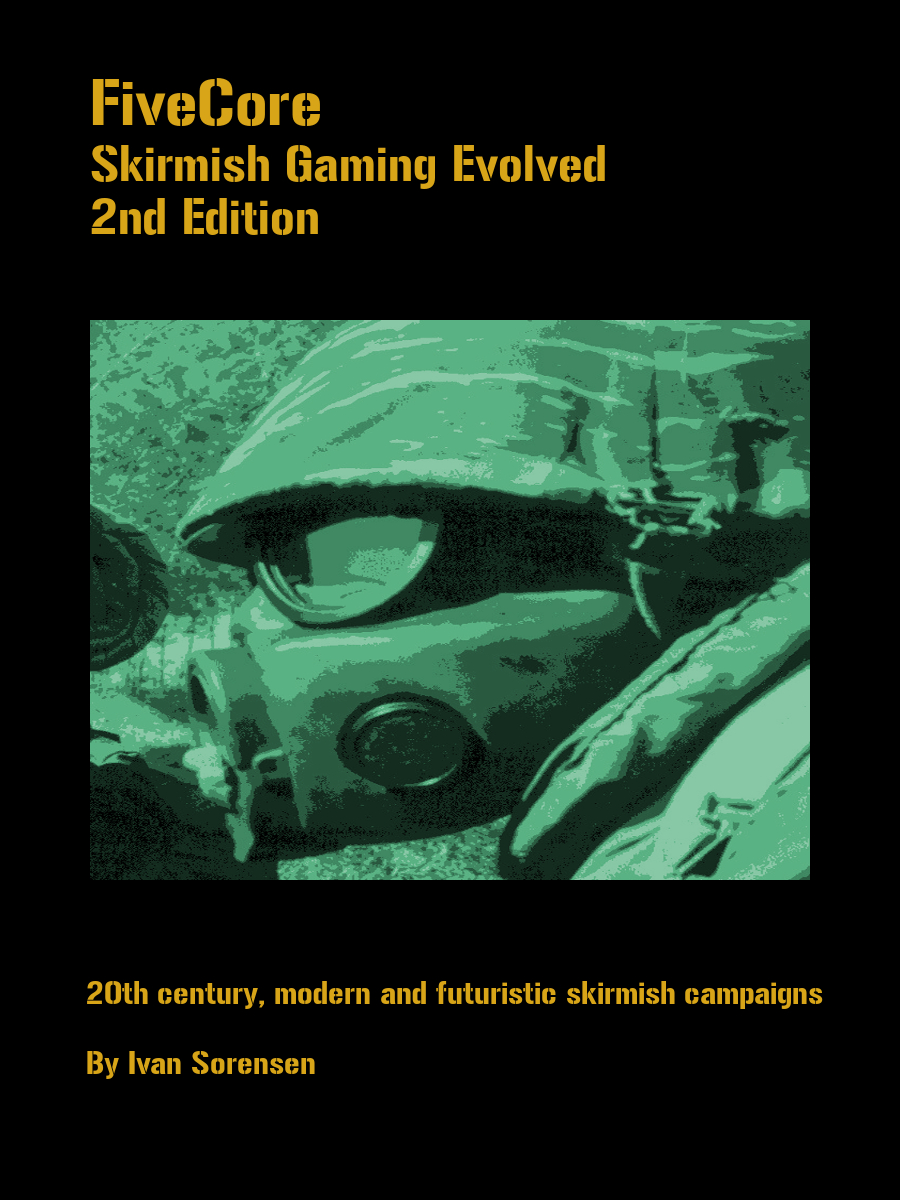 After much frantic typing, dice rolling and digging through PDF's, I am incredibly excited (and rather nervous) to present the 2nd edition of FiveCore: Skirmish Gaming Evolved.

As I have discussed before, when the time became clear to consolidate FiveCore, I put the question to the player base and the overwhelming response was "Make a new version with all the best parts pulled in".

So I hope this will be an example of how to do a second edition "right". Keep what made the game great but expand on the content, make it more complete and make it much more clear-cut and self-explanatory.

More importantly, it'll make it much much easier to do new settings, campaigns and scenarios for myself and others, since the core game is a much more robust toolkit now.

The turn around to this one was surprisingly short because much of it was consolidating material that either had already been published or things I had been working on for a while behind the scenes.
It helps that I had some fantastic feedback.

*What stayed the same?*

*The core game mechanics have remained the same:
*Movement, firing, turn sequence, brawling and so forth.
*It's still 1's and 6's with scurries and fire fights.

*Almost everything has been clarified.
*Rules are far more clear now, with better examples. Everything should be easier to read and navigate as well.
*A ton of optional rules variations have been provided, to help you customize.
*Movement bonuses are now much simpler (and affect more stuff).
*Indirect fire.
*Expanded weapons list.
*Morale and quality rules from Company Commander have been included.
*The "Unusual situations" chapter is now far more comprehensive covering everything from searching to stealth missions to night fighting.
*Vehicle rules! (they are a mix of the Company Commander and Heavy Metal versions, really)
*Suggestions for alien traits, psionic abilities, super powers and spells (10 of each).
*Random events built into main rules now.
*Solo gaming much expanded, with more tools (NPC aggression, priorities, morale)
*Random mission generator with objective markers.
*Victory point system (which factors in handicaps for uneven forces)
*Full blown campaign rules with random events, character progression and all the pseudo-RPG stuff I tend to do.
*Character progression has been refined with more clear roles for your soldiers to fit.
*Heroics.

And probably a bunch more stuff I am forgetting!
The game is 3 times as long as the original!

Since the core mechanics are the same, all existing supplements are compatible, as is Five Parsecs From Home.
The only supplement that really is lacking a purpose now is Heavy Metal but I have some ideas in mind for a free upgrade there.

The existing rules PDF will remain, probably at a very low price point as a cheaper introduction version.
Since this is a case of "more stuff" rather than overhauling core mechanics, it also means I hope people will be buying the new version because it's awesome, rather than because they feel forced to do so.

I have a cool little freebie in mind for the faithful who bought the original version, so even if you don't intend to upgrade now, stay tuned.

New Release Nordic Weasel Games PDF
This entry was posted on Wednesday, February 4th, 2015 at 15:57 and is filed under News. You can follow any responses to this entry through the RSS 2.0 feed. You can leave a response, or trackback from your own site.

4 thoughts on “FiveCore 2nd Edition Is A Reality”