Reply To: Fight in the Phillipines, Dec 41

Ask, and ye shall receive 😉

It’s 2130 on 20 December 1941, and following its ass-whoopin’ at Horseshoe Ridge, 1st Platoon is moving Back up the slopes under the cover of darkness to recover its casualties.

Sgt Carlson: “Alright, here’s what we’re gonna do.  We’re gonna wait ’til it’s nice and dark, then we’re gonna go get our men.  We’ll set the gun and Cpl Duncan’s mortar into the same exact positions, and I’ll take 2nd Squad up the ridge.  1st Squad stands by down below, just in case.  We go up, grab our guys, then get the hell outta dodge.  If any shootin’ starts, I want the mortar and MG to open up.  I want a wall of fire between the eastern side of the ridge and the west, keep the Japs from getting at us.”

With that, the Marines of 1st Platoon moved into their start positions, ready to jump off. 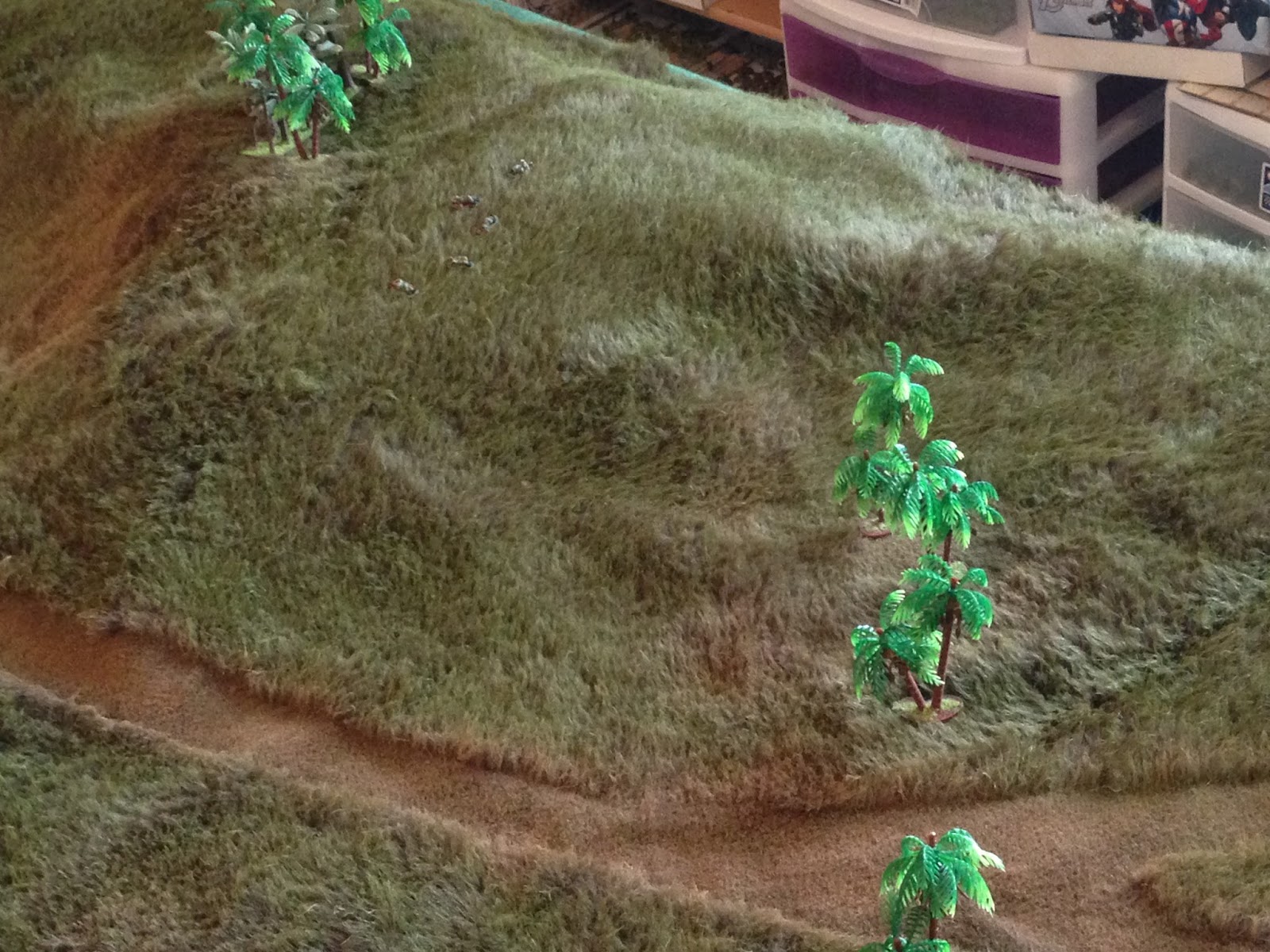 The full table is still set up, but this is the contested area we’ll be dealing with for this fight, just the eastern slope of Horseshoe Ridge.  North is to top right, and you can see the Marine casualties lying in the open at center top left.  It’s night time, but apparently the moon is pretty bright 😉 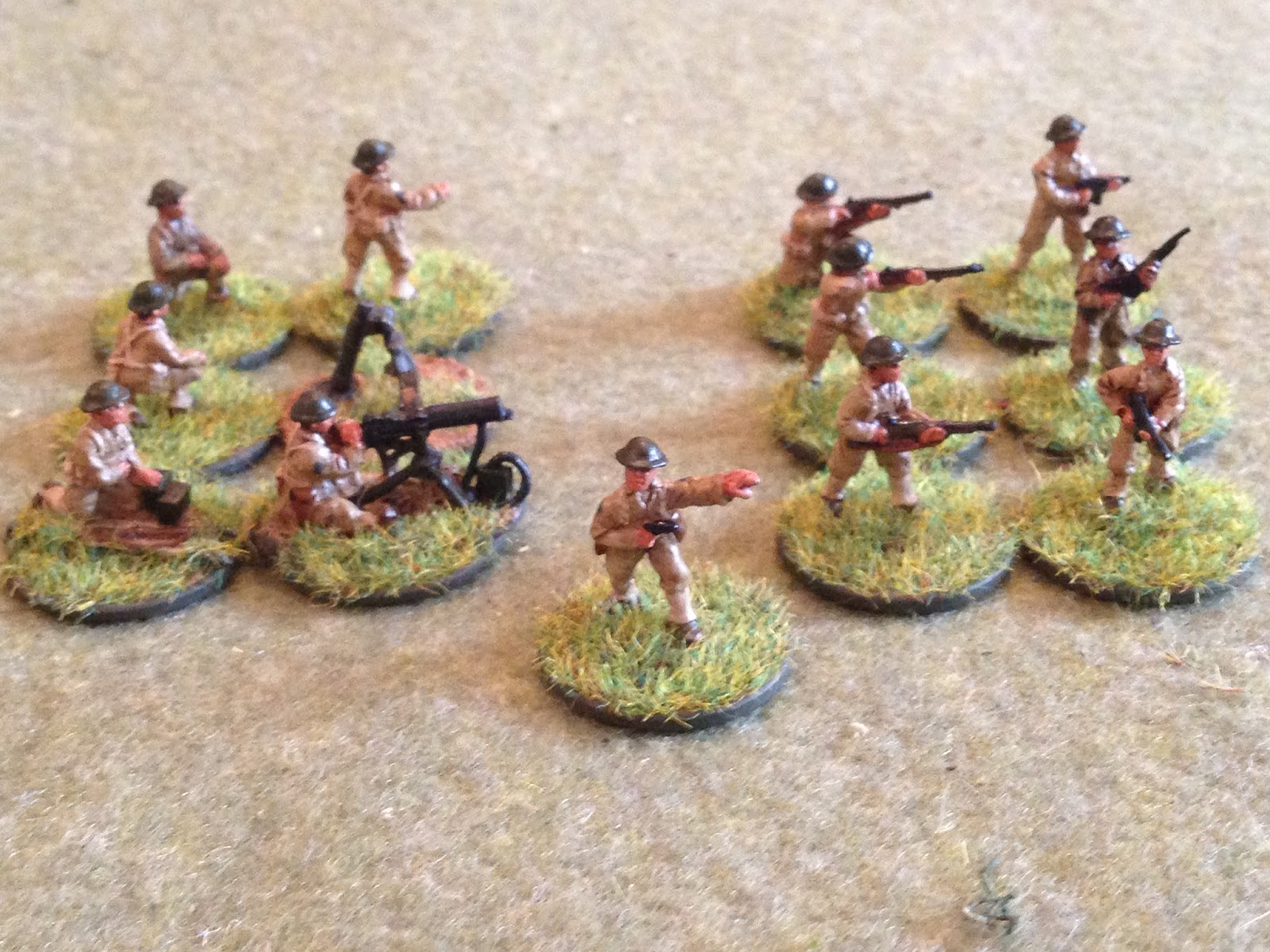 The Marines: the actual fighting force will the Platoon Sergeant (bottom center), Sgt Carlson, and the six Marines of 2nd Squad (right).  As a figure, Sgt Carlson is carrying a .45-caliber pistol, but for the game he’s carrying a Tommy Gun (I have plenty of Tommy Gun figures, I just wanted his pose to stand out).

The MG and mortar teams are for decoration, scenario fodder.  The Marine fighting force is just seven men with Tommy Guns, a BAR, and Springfield 03s. 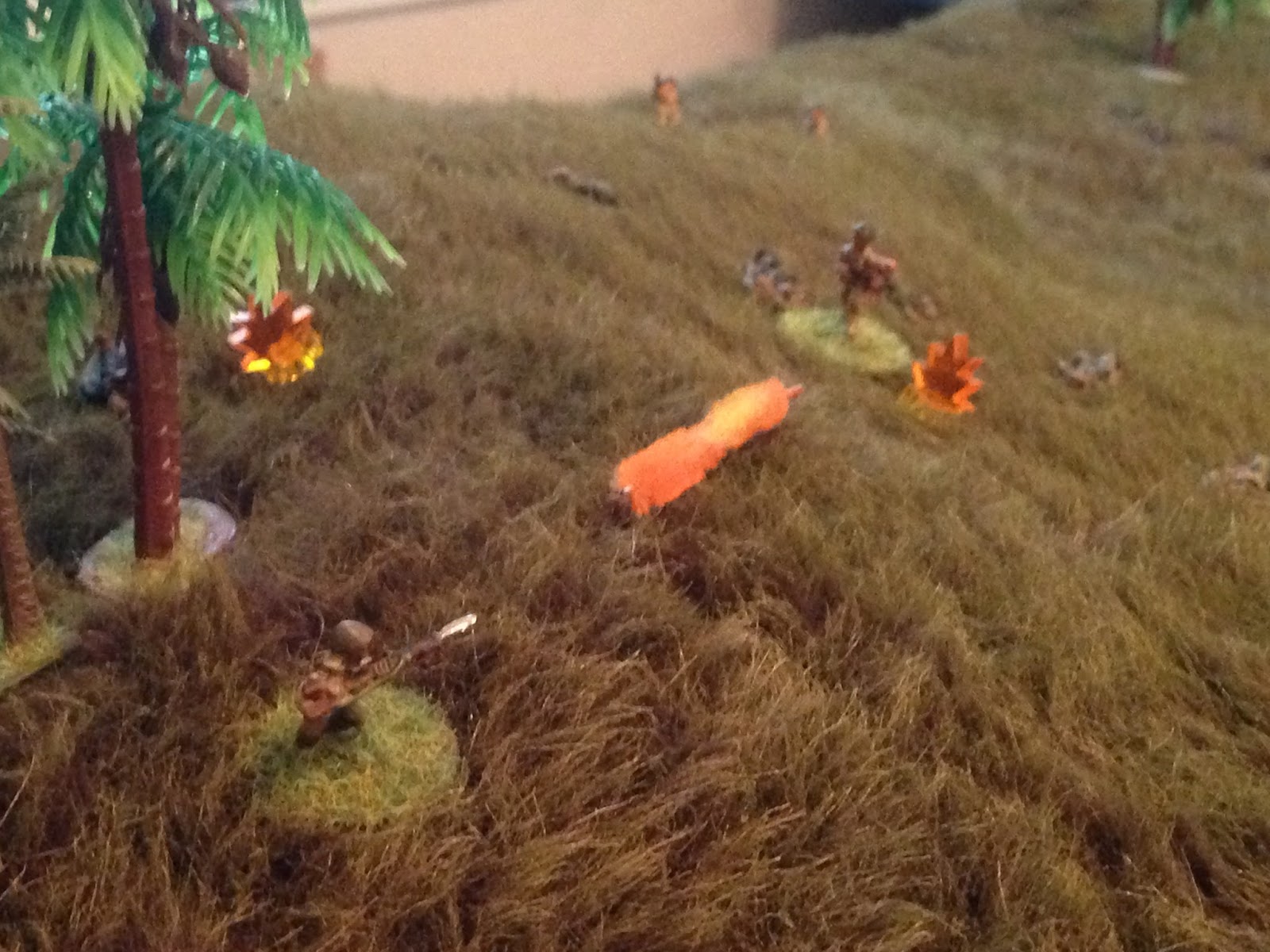 The Marines move up the slopes to recover their fallen buddies, but as they do, a Japanese sentry spots Sgt Carlson and fires.  To see how the fight went, please check the blog at:
http://oldleadbreed.blogspot.com/2017/01/the-philippines-fight-3.html

The remains of 1st Platoon falls back to regroup, and they make contact with higher headquarters.  Major Ford, their Company Commander orders them return and take Horseshoe Ridge!  While a few of the wounded have been able to return to the line, the Major knows 1st Platoon is still pretty understrength, so he lets them borrow an M-3 Stuart of the 194th Tank Battalion, an Army National Guard unit.

Captain Moon saw to it that his men got plenty to eat and drink, and plenty of rest.  Then they mounted up on the morning of 24 Dec 41 and began making their way back to Horseshoe Ridge for our next fight, which I’ll post in a couple days.