I thought it strange that there’s always so much talk of the fighting IN France but rarely any focus on the French forces themselves so I did a little research and found it a very interesting story. I have at last finished painting my collection of French fancies so without further adieu (I couldn’t help myself, sorry) on with the show.

In 1936 in response to Germany’s continued remilitarisation France was taking a long hard look at its Airforce and finding that it was long overdue a major update. 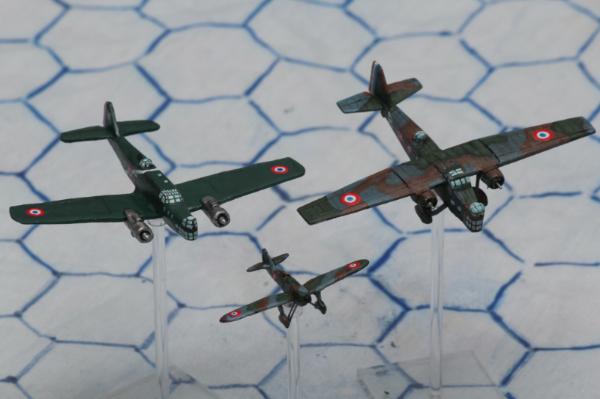 Fighters like the Dewoitine D500 and bombers like the Bloch MB210 not long ago considered the very leading edge of modern aviation were already practically obsolete and in need of replacing. 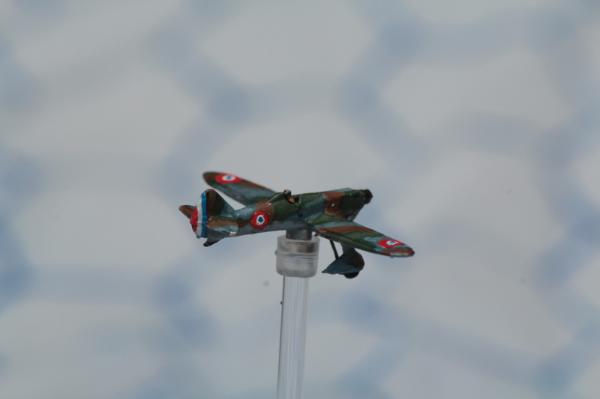 The Dewoitine 510 was still in production at the time. A beautiful little monoplane plane with long, low wings, fixed undercarriage and open cockpit it was clearly an outmoded mount yet a shipment had just been delivered to China where they saw action against Imperial Japan. 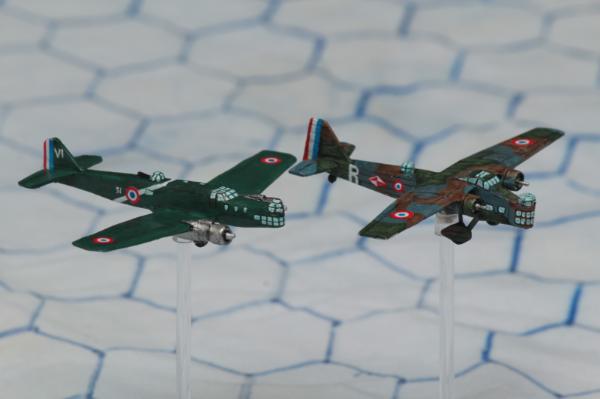 The old Bloch MB210 had been an improved design based on the older MB200 and as such had been easily rolled into production to outfit a number of bomber groups. However both were now considered too old and vulnerable and suitable for night bombing only. They were scheduled for replacement by newer and faster bombers as soon as these could be designed, produced and equipped. 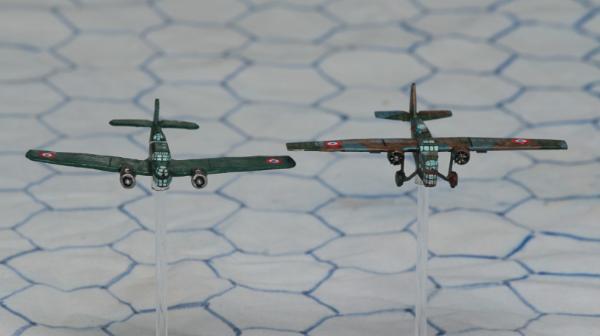 The war came sooner than the replacements however and the old Blochs remained in service as reserve units and were occasionally pressed into service. Many French MB210s survived the war intact by dint of rarely seeing action. However the Romanian Airforce operated their MB210s with some success. Some of the even older MB200s were used by Vichy French forces in the Syria-Lebanon campaign where they were eventually destroyed on the ground.

Many private aircraft manufacturers in France were swiftly bought up and nationalised in an effort to meet the needs of National Security. However it proved too little too late as German production outstripped that of its neighbours and by 1940 the Armée de l’Air were still woefully under-equipped to have any real hope of success against the Luftwaffe. 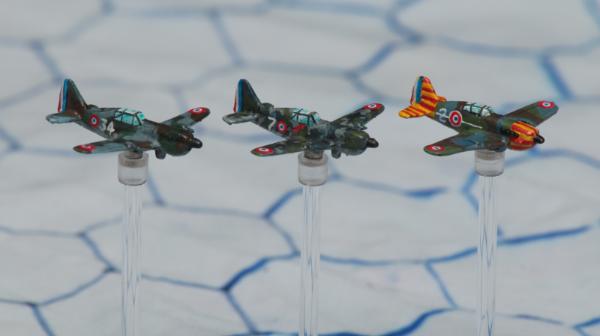 One product of this nationalisation project was the Morane-Saulnier MS.406, designed to replace France’s ageing stock of 30’s fighter planes. Over 1000 were produced making it one of the most numerous of France’s fighter planes. 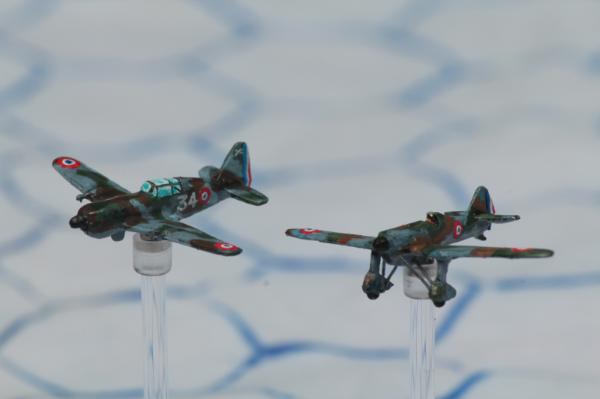 Although it was a considerably more modern design than the aircraft it replaced it was underpowered, underarmed and critically outperformed by the Luftwaffe’s Bf 109E. 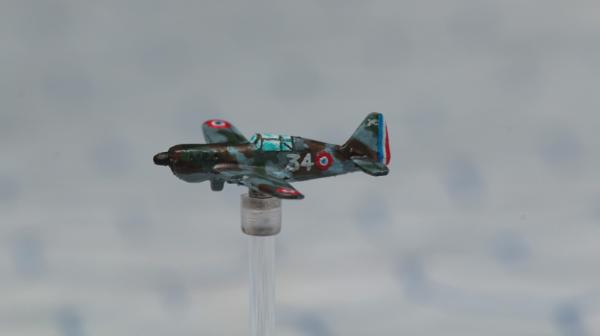 Pilot Sgt. Mirolsav Jiroudek, like many airmen escaping the German occupation of their home nation, fled to France to continue his fight against Nazi Germany. He flew with Groupe de Chasse III/1, operating this MS406 during the Battle of France. Upon the fall of France Jiroudek was able to escape to Britain where he flew Hurricanes and later Beaufighters in service with the RAF. He returned to Czechoslovakia in July 1945 and flew for a Czech Air Line until 1950. 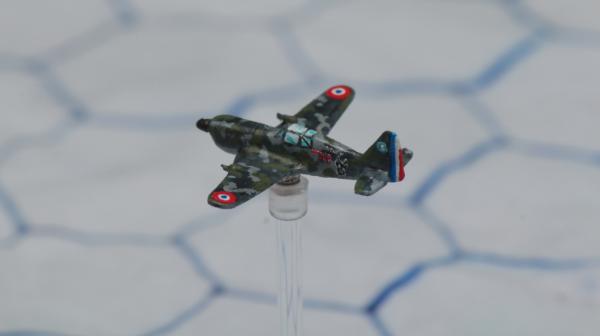 At age 18 Pierre Le Gloan joined the Armée de l’Air at the outbreak of the war. He served in the GC III/6 fighter squadron, flying the Morane-Saulnier MS.406 from Chartres in the air defence of Paris. He scored victories against four German bombers in the battle of France. Two Do17 and two He111. 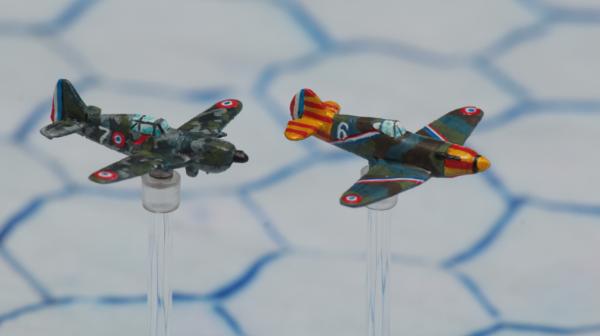 Le Gloan’s unit GC III/6 were re-equipped with new Dewoitine D.520 fighters in June of 1940 and moved to the south of France. Le Gloan in his new D520 soon added a number of Italian aircraft to his tally before the Armistice between France and Germany. Le Gloan’s unit were sent out to Syria where he scored victories against RAF Hurricanes and Gladiators before being withdrawn back to Algiers. 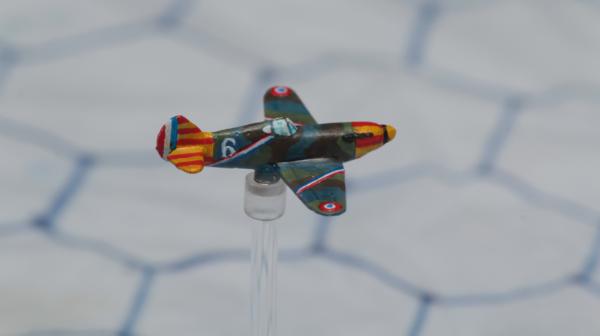 Following the Allied invasion of North Africa in November 1942 GC III/6 defected to the Free French. They were equipped with Bell P-39 Airacobras which Le Gloan flew until his death in a landing accident in September 1943.
Pierre Le Gloan had shot down 18 aircraft during his flying career, four German, seven Italian and seven British making him an ace for both sides. 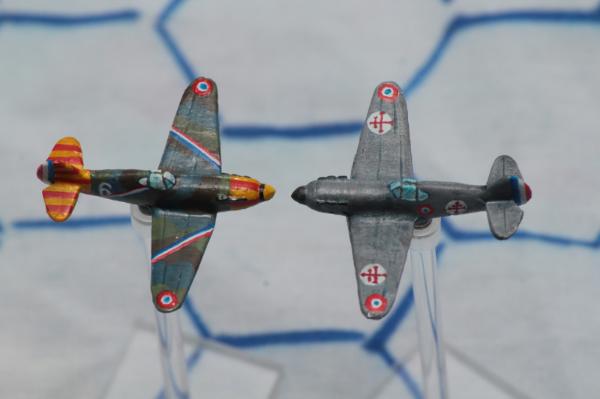 The Dewoitine D.520 was the best modern single engine fighter that France produced, out-performing the MS.406 and able to hold its own against invading German fighters. However due to delays in development, production and delivery (France’s aeronautical industry being frightfully ill-equipped for the war) there were nowhere near enough available to defend France. Had more D.520’s been ready in time they might have made a much more significant contribution to the war. 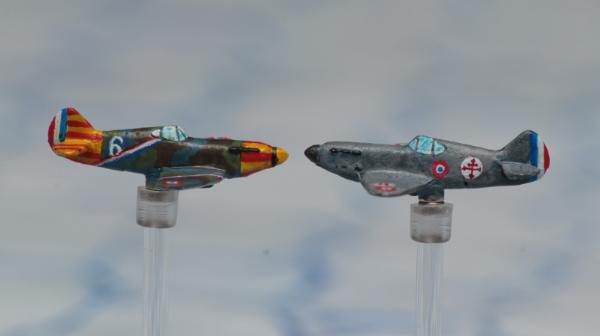 They had a great range, good manoeuvrability, powerful weaponry and handled very well. The Italians who received some following the armistice thought them excellent. 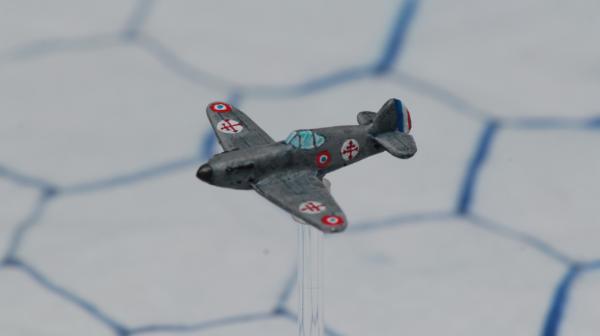 This Dewoitine 520 was captured from the Vichy French in Lebanon by Free French airmen flying with the RAF. It was marked with the Cross of Lorraine, the symbol of the Free French Forces led by Charles de Gaul. A fine prize to be sure, to liberate one of your own, however the few D.520’s in Free French hands could only be used as advanced trainers as their radios were incompatible with other RAF combat aircraft. 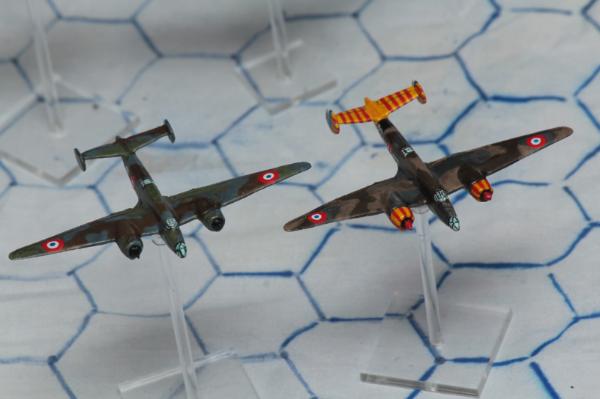 Another product of the Armée de l’Air’s desperate modernisation programme was the Lioré et Olivier LeO 45. This medium bomber was originally designed to meet the1936 B4 specification (which itself had shifted a number of times since 1933) With the imminent threat of war looming and continued delays due to engine reliability the LeO 45 was hurried into production despite known teething problems. 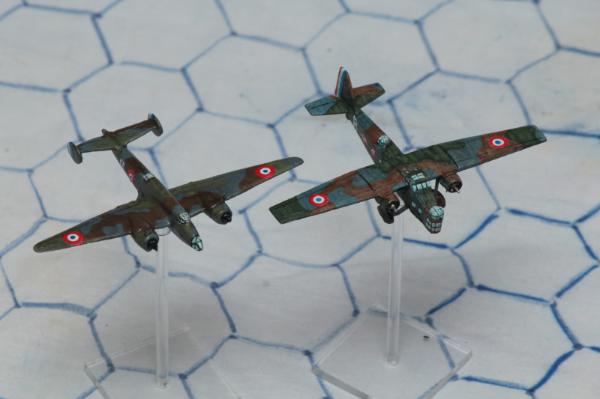 The LeO 451 entered service flying reconnaissance over Germany with Groupe de Bombardement I/31, but by the start of the Second World War this unit had only five LeO 451s and eight practically obsolete Bloch MB200s. (Honestly, is the MB200 not the ugliest plane ever to lift off from the face of the earth?) 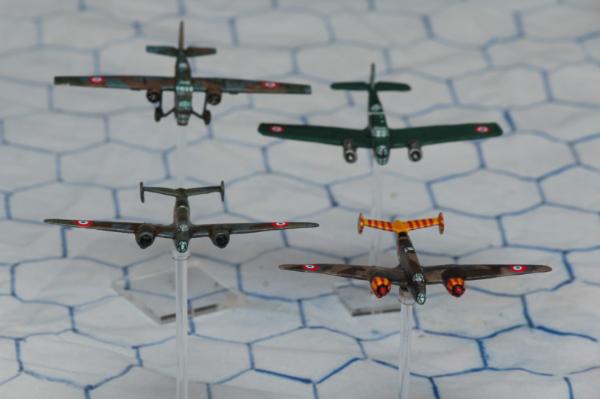 In fact by the start of the Battle of France only 54 of the 222 LeO 451s that had been delivered were actually ready for combat. Too few in number and often without fighter escort the LeO 451 was none the less a remarkably fast and very agile bomber and enjoyed some success against Italian forces. 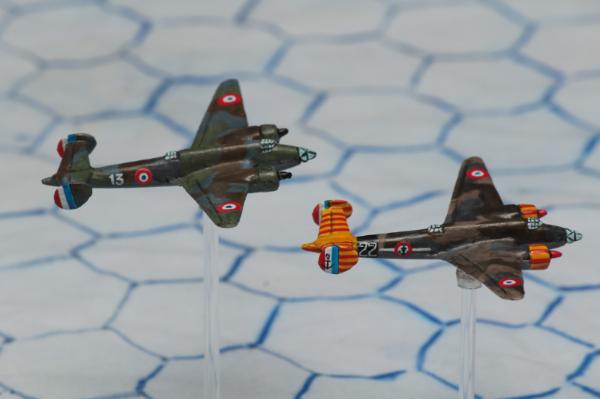 Following the armistice LeO 451s continued to fly under Vichy direction in the Syria-Lebanon Campaign and a number were captured and used by both sides as unit hacks and transports.

And the last two aircraft in my (not entirely comprehensive) French roundup are the Potez 631 and Potez 63.11 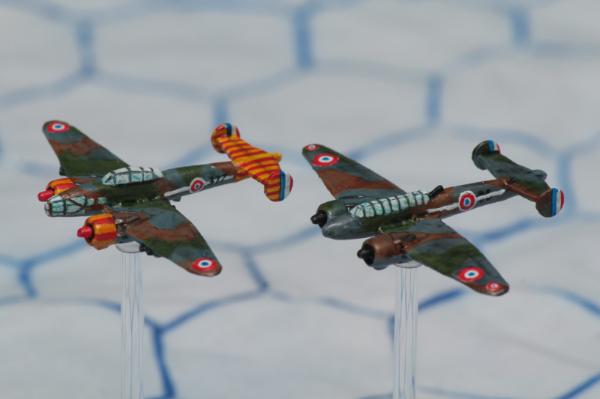 The Potez 63 was originally designed to fulfil the role of Fighter Control, bomber escort, interceptor and night fighter. Something in the vein of the German Bf-110 or the Soviet Pe-2, you can see the similarity. Unfortunately so could many French anti-aircraft gunners and “friendly” fliers and often the Potez 631 was mistaken for its German counterpart and attacked by its own.

Due to the French aircraft industry’s inability to produce high powered aircraft engines most German bombers were able to outrun the underpowered Potez 361 so it wasn’t much use as an interceptor, day or night. 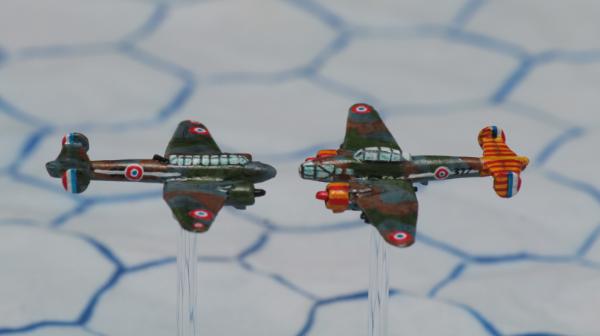 The most useful and therefore most numerous of the variations was the Potez 63.11 which had been developed to serve with the Groupes Aèriens d’Observation (Army co-operation squadrons) as a reconnaissance aircraft.
It had a completely redesigned crew compartment and extensively glazed nose. The pilot’s seat was moved higher and further back to accommodate the changes.

A note on colour schemes before we’re done. Most of what I’ve been able to find suggests the Armée de l’Air did not employ any standardisation in camouflage patterning so there was much variation in the blue/grey, green, brown tri-colour scheme. 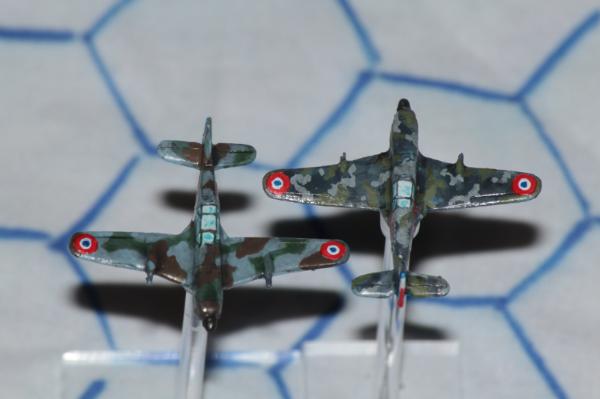 National cockade roundels typically were placed in the usual 6 locations with the wing roundels being located on the very end of the wing. 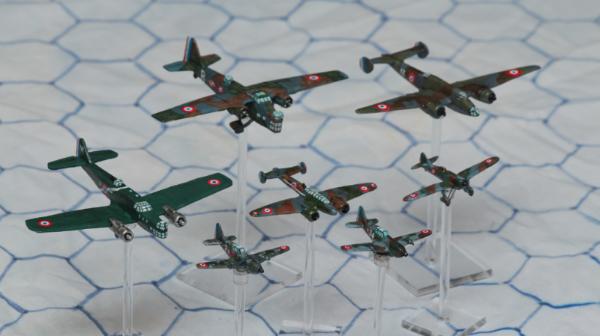 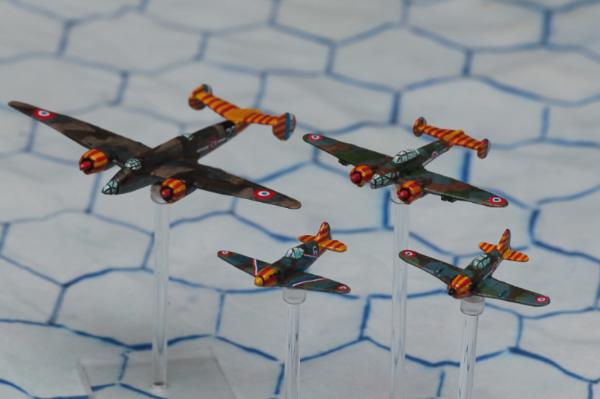 The Vichy era saw the addition of a white stripe and outline to the fuselage roundels, and in mid-1941 the introduction of the infamous yellow and red “Slaves’ Pyjamas” striping on the tails and engine cowlings.

That’s it for my Focus on French fliers. Hope you enjoyed seeing them. As ever I’d love to hear your thoughts and Thanks for looking.